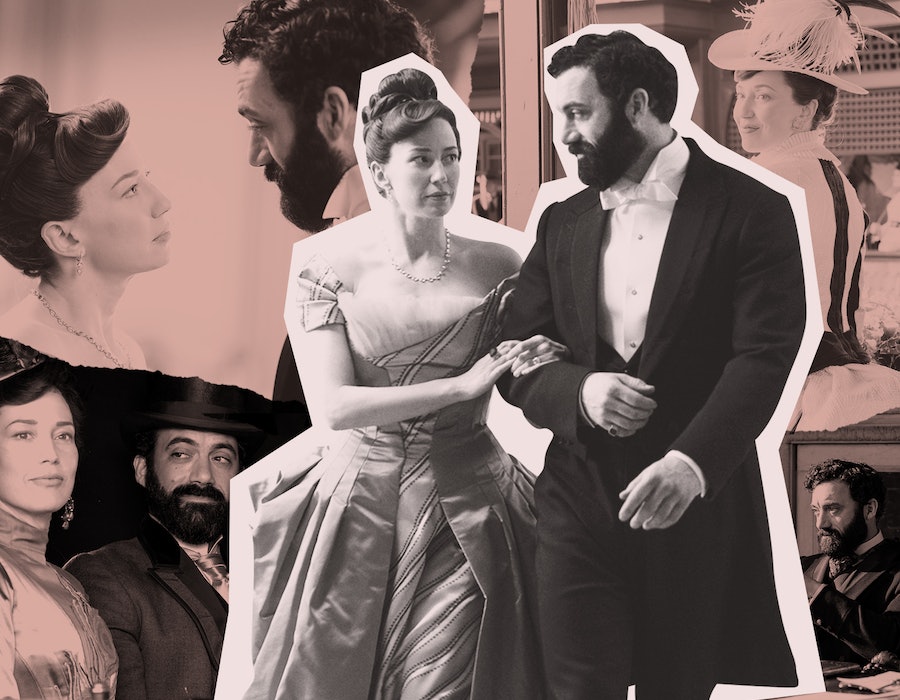 Shhhhhh. Shhhhhhh. Do you hear that? It’s the sound of silk fabric gently rustling in the breeze. Hair, being secured with fine mother-of-pearl pins. Hats. Exquisite HATS. It is a new period piece and, like the mighty Cthulhu from the depths of hells, I have been summoned.

The Gilded Age is HBO’s new television show from Downton Abbey’s Julian Fellowes, in which the manners are restrained and the production designs are anything but. It could not be more up my alley if the actors showed up on my front porch to perform the next episode live. (And they could. As I point out to my fiancé every single episode, almost every cast member is an esteemed Broadway actor.) The New York Times called it a “Dime-Store Downton”, but I hear criticism of the show the same way I would take someone critiquing the childhood challah recipe my mom baked for me growing up: you’re just never going to get through to me. Suit yourself! More for me.

Luckily, I am not alone in my appreciation. The show wrapped its first season on 23 March and has already been renewed for season 2. Of course, like Downton Abbey, some of the characters and their storylines are more tiresome than others, but it’s hard to complain when we also get Nathan Lane in an absurd goatee (somehow less ridiculous than the actual goatee of the historical figure he’s playing) and Christine “The GOAT” Baranski firing off bon mots and disparaging comments about new money like she’s Annie Oakley.

And somehow — somehow — that’s not even the best part of the show. The Gilded Age earned its keep on my viewing schedule and in my heart, with the incredible couple of George and Bertha Russell.

Russell looks at his wife in admiration, and then glances at the ladies-maid with a smirk. You wish, he says with his eyes.

The Russells are the nouveau-riche of the show, the newly-minted railroad barons trying to use their wealth to enter the exclusive world of the old-family elite of New York City, a social scene organized by one notorious Mrs. Astor and not entirely unlike high school in the rigidity of its in-crowd/out-crowd segregation. To that end, the Russells have built an enormous mansion on the Upper East side, and stocked it to impress with imported marble and a French chef.

By my estimation, Mr. and Mrs. Russell are the are the most compelling pair on the show by a long shot. First, they are both extraordinarily beautiful. George is played by Morgan Spector, who is god’s gift to closely-cropped beards, and Bertha is the phenomenal Carrie Coon, who glides into every scene like a swan in haute-couture.

But beyond that, they are the best modern married pair I have ever seen on TV and the only #CoupleGoals couple I will ever need again.

In an early scene, Mrs. Russell is heartbroken and furious when a charitable organization she’s trying to infiltrate chooses to hold their fundraising bazaar in a second-rate hotel instead of her extremely elegant ballroom. Mr. Russell might personally think that his wife’s aspirations to climb the social ladder are a little unnecessary, but he doesn’t diminish or belittle her goals. Instead, he and his wife come to the bazaar, and he buys out every single item and shuts it down within minutes. And then, with the ashes of the metaphorical fire they set behind them, the pair glided out together, arm in arm.

They love each other for who they are: smart, ambitious, conniving, clawing. All of it. And it’s extremely sexy.

In another scene, one of the house’s ladies-maids gets in her head that she’ll seduce George to raise her station in life. She slinks into his bedroom, peels off her robe, and lies naked in his bed. George immediately rouses and stands. The maid gives her sales pitch: she’ll worship him, listen to him, give him everything he needs. George almost smiles before pointing out the flaw in her logic: he loves his wife. Later in the episode, Mrs. Russell is leaving to attend the opera, wearing a red dress that can only be described as devastating. Russell looks at his wife in admiration, and then glances at the ladies-maid with a smirk. You wish, he says with his eyes.

The pair don’t always get along — George wants Bertha to be less protective of their daughter, and he doesn’t quite share her social ambitions — but they are so fully in each other’s corners at all times, it’s hard not to swoon. When George was faced with a betrayal from lawmakers and needed to make a risky financial move in order to fire back, Bertha barely blinked. “We made all this once, we can make it again,” she says, shrugging. She’s not in this for the money — she’s in this for the man. They love each other for who they are: smart, ambitious, conniving, clawing. All of it. And it’s extremely sexy.

We’ve thankfully more or less moved past the era where heterosexual sitcom television couples seem to outright despise each other, but it’s still refreshing to see a young, ambitious couple fully and unequivocally in love, who mutually support each other’s goals. As Julian Fellowes summed up to Hollywood Reporter perfectly after the final episode aired, “George and Bertha have one of those marriages where they don’t share each other’s ambitions, but they entirely support each other’s ambitions.” I know that this is television, and surely some conflict will arise in future seasons, but for now I will continue to bathe myself in the luxurious, purely aesthetic television tub that is The Gilded Age and enjoy my new favorite married couple.

More like this
'Bridgerton' S3 Will Show A *Very* Different Side To Kanthony
By Sam Ramsden
Twitter Is Burning As Phoebe Dynevor Reveals Daphne’s 'Bridgerton' Exit
By Sophie McEvoy
Helena Bonham Carter Doesn't Think 'The Crown' “Should Carry On"
By Sam Ramsden
Everything To Know About The 'Daisy Jones & The Six' TV Series
By Maxine Harrison and Brad Witter
Get Even More From Bustle — Sign Up For The Newsletter
From hair trends to relationship advice, our daily newsletter has everything you need to sound like a person who’s on TikTok, even if you aren’t.