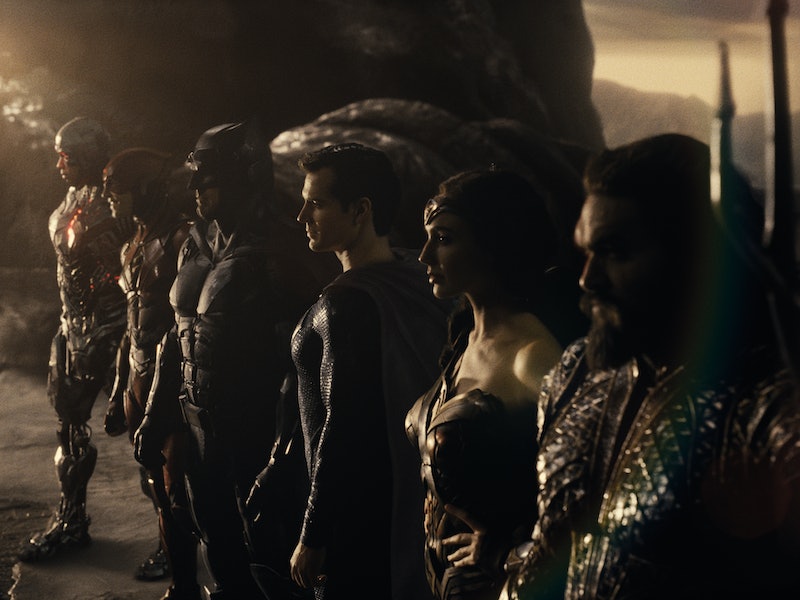 Over the past few years, the phrase “Release the Snyder Cut” has worked its way into the pop culture lexicon. Ever since Justice League debuted in 2017, the movie has been embroiled in controversy and behind-the-scenes drama — leading some fans to believe that a better version of the film might have been made, if only its original director, Zack Snyder, had been able to see it through. The soon-to-be-released Zack Snyder’s Justice League aims to be just that — and to not only appease the fans that called for the new cut, but also perhaps bring in new ones.

Zack Snyder’s Justice League hits HBO Max on Thursday, March 18, with Gal Gadot returning as Wonder Woman, Ben Affleck as Batman, Jason Momoa as Aquaman, Ray Fisher as Cyborg, Ezra Miller as The Flash, and Henry Cavill as Superman. The premise of the film follows much of the same story as Justice League, centering on a group of unlikely allies teaming up to battle supervillain Steppenwolf (Ciarán Hinds). But it also brings a darker tone, fleshed-out backstories for each character, some updated CGI — and significantly more runtime.

But what exactly is the Snyder cut? Why are fans so excited for it? And most importantly, how can you watch it?

What is the Snyder cut?

Back in 2016, after Zack Snyder’s Batman v Superman: Dawn of Justice premiered to both poor reviews and disappointing box office numbers, the folks at Warner Bros. got a little nervous about Snyder’s next film, Justice League, Snyder explained in an interview with The New York Times. The studio eventually brought in The Avengers director Joss Whedon to pump up the humor and tweak the script.

Then, tragedy struck Snyder’s family. His daughter Autumn died by suicide before he could finish the film, and the studio hired Whedon to take over the project. The resulting film, however, appeared to be cobbled together without a cohesive narrative — reportedly the effect of clashing input from Snyder, Whedon, and Warner Bros. executives. Whedon added 80 pages to the script. Extensive reshoots were ordered. Backstories were cut, the film was given a lighter, funnier tone than Snyder had intended. Perhaps most infamously, Henry Cavill’s Mission Impossible mustache was poorly digitally removed, resulting in an odd-looking upper lip. The movie wasn’t well-received; angry fans placed their blame on Whedon. That’s when #ReleaseTheSnyder cut began to trend.

In response, Snyder started teasing fans on social media with images and story ideas that were cut from the theatrical version of Justice League. Further galvanized, fans banded together on social media, demanding to see Snyder’s version of the film. A Change.org petition was started, fans launched websites in support of the cause, and the hashtag gained steam on Twitter, Facebook, Instagram, and other sites. Gal Gadot and Ben Affleck even got in on the fun. Eventually, Snyder himself admitted that he did have a version of his own cut somewhere, and that he was interested in finishing what he started.

In May of 2020, Zack Snyder’s Justice League got the green light. New head honchos were in charge of Warner Media, and in the midst of launching HBO Max; Snyder got the go-ahead to complete his version for the streaming service. The cast came back for $70 million in reshoots.

How long is it?

Get comfy. Zack Snyder’s Justice League is a whopping four hours long. The 242-minute movie provides backstories characters like Cyborg and Aquaman, which were largely cut from Whedon’s version. Apparently, Warner Bros. mandated a two-hour run time for Justice League, but Snyder had turned four hours of a roughly-cut film when he stepped back from the project. This time around, Snyder was free to go with his preferred, lengthy runtime. Joking with The New York Times, Snyder says, “It’s like The Irishman, but with action.”

What’s in the trailer?

The first trailer was released back in November of 2020 and featured Leonard Cohen’s “Hallelujah” over the scenes of destruction and chaos. “Hallelujah” was apparently Autumn Snyder’s favorite tune.

There were two other trailers released last month, one with Jared Leto’s Joker making an appearance (the character wasn’t in Justice League, and Leto joined the cast for reshoots to include Joker in the cut) and a second trailer with different images and characters.

Zack Snyder’s Justice League is only available on HBO Max beginning on March 18, 2021. Stream it here.