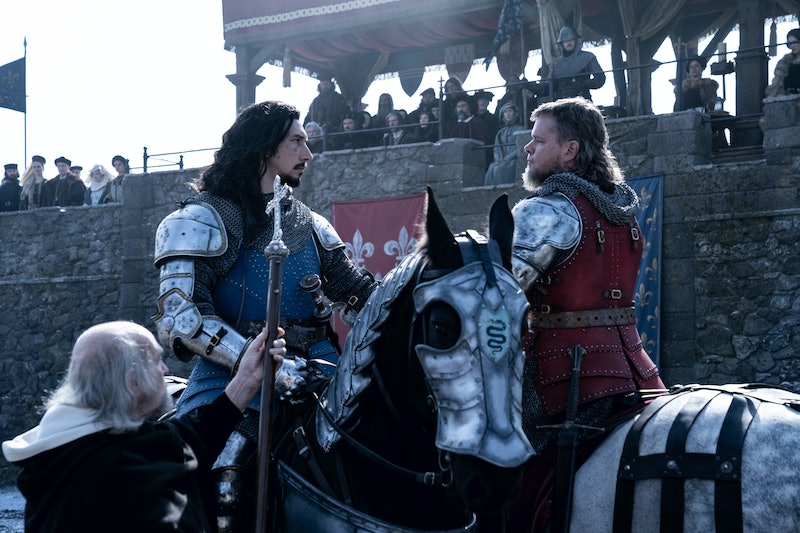 The face-off shown in Ridley Scott’s The Last Duel may have been the final court-sanctioned judicial combat in France, but the conversation around the events that led to it is anything but finished.

Based on the 2004 book of the same name by literary historian Eric Jager, The Last Duel sheds light on the bout between Jacques Le Gris (Adam Driver) and Jean de Carrouges (Matt Damon), which was waged over accusations that Le Gris raped Carrouges’ wife, Marguerite (Jodie Comer), and resulted in Le Gris’ demise. While historians unanimously agree on that last part, everything else is muddled with contradictory evidence. To this day, historians are divided on the truth of the case.

Co-writers Nicole Holofcener, Ben Affleck, and Matt Damon had their work cut out for them trying to fill the gaps. The Last Duel is told in three chapters, each of which was written by one of the writers, and told from the perspective of one of the main characters. Holofcener penned Marguerite’s section, and, given how little historical information there was from the Lady’s side of the story, she drew from contemporary conversations about sexual assault and women’s rights to imagine her perspective.

“I did research about what women were like then and what they had to put up with … And I really tried to imagine just how awful it was for [Marguerite] and how she dealt with the awfulness,” Holofcener told The New York Times. “Her life was pretty bad being married to Jean de Carrouges and so when she was violated, she had nothing to lose, really. I mean, she was going to suffer. She had the potential of suffering dearly and dying, but at that point she was just tired of having no voice.”

Below, everything that’s known about Le Gris and Carrouges, Marguerite’s accusations, and the so-called “last duel.”

Le Gris and Carrouges were once very close. They met in the household of Count Robert d’Alençon, where the two served as squires to the count. According to Jager, the two were such dear friends that Carrouges made Le Gris godfather to his child — a son born from a previous marriage — in 1377.

...until Le Gris became a favorite in Pierre d'Alençon’s court.

Following Robert d’Alençon’s death, the Count’s brother, Pierre, took over the court. The newly-minted Count Pierre took an immediate liking to the charming Le Gris, which strained the latter’s friendship with Carrouges. Le Gris’ stock rose in the court, and he received special treatment and gifts from Count Pierre, including the lavish Arnou-le-Faucon estate, which had once been owned by Marguerite’s father. Carrouges, who was neglected by both the Count and Le Gris, grew increasingly jealous of his former comrade. Following the death of Carrouges’ first wife and son, he and Le Gris finally severed ties.

Over the next few years, Le Gris climbed further up the ranks, and was eventually initiated into King Charles VI’s royal court. Carrouges left for battle in Normandy, and eventually married his second wife, Marguerite de Thibouville.

According to Jager, Le Gris took an immediate liking to Marguerite when Carrouges introduced her to the court in 1384. According to Marguerite’s testimony, Le Gris and Adam Louvel, a squire in the royal court, conspired together to assault her. The offense took place on January 18, 1386, while she was still in Paris, alone at her mother-in-law’s chateau with one other maidservant. She alleged that Louvel came to her door to ask for a favor, after which he made her uncomfortable by talking inappropriately about Le Gris, saying he was in love with her. As she tried to admonish the squire, Le Gris appeared, having snuck in after Louvel entered.

Le Gris and Louvel forced Marguerite into the bedroom, where Le Gris raped her while Louvel helped hold her down. Jager writes that following the assault, Le Gris was reported to have told Marguerite that if she were to “tell anyone what has happened here, you will be dishonored. If your husband hears of it, he may kill you. Say nothing, and I will keep quiet, too.” Marguerite appeared to agree, but after Le Gris tossed her a small leather bag of coins, she replied: “I don’t want your money! I want justice! I will have justice!”

The court took Le Gris’ side, which led Carrouges to pursue justice through other means.

From the start, Le Gris had an advantage in the trial. Charges against Le Gris were brought to Count Pierre’s court some weeks after the attack, but as the accused was a favorite of the Count, Carrouges and Marguerite were certain that they wouldn’t be given a fair trial, and refused to attend the hearing. They were right — Le Gris decried Marguerite’s accusations as false and inflammatory, and Count Pierre took his side, clearing him of the charges.

Marguerite and her husband appealed the decision. Carrougues went to King Charles VI and challenged Le Gris to a judicial duel, which were still lawful in the French court. At the time, Jager explains, “trial by combat” was believed to be “‘the judgment of God,’ traditionally looked to heaven to assure a just and fair verdict.”

Since Le Gris had briefly served as a church cleric in his youth, he could choose whether he wanted a state trial or church hearing. He opted for the former, against the advice from his lawyer — church trials rejected violence, and were deemed to have less dangerous outcomes. However, Le Gris insisted on his right to testify before Parliament, leaving the door open for Carrouges to request a duel.

Carrouges’ choice to pursue a duel also put Marguerite in danger. If Carrouges had lost, she would’ve suffered her own consequences — according to Jager, this would’ve meant being burned alive at the stake.

The result of the trial by combat is undisputed.

Though it’s unanimously agreed that Carrouges was victorious over Le Gris in the duel, there are various accounts to what took place on Dec. 29, 1386. Dr. Ariella Elema, a historian who specializes in trial by combat, analyzed differing accounts of the duel, which appears to have been “a very short affair that shocked the audience.”

Jean Le Coq, Le Gris’ lawyer, stated in his private notebook that Carrouges suffered the first wound, writing that Le Gris “attacked his adversary very cruelly.” This statement is also supported by Jean Froissart, a member of Count Pierre d’Alençon’s court, and an unnamed monk who wrote Chronicle of the Monk of Saint-Denis.

Jean Juvénal des Ursins, who was not present at the event, wrote that right before Carrouges delivered his deathly blow, he demanded to hear the truth from Le Gris. He wrote that Le Gris “responded that before God, and on the peril of damnation of his soul, that he had never committed the crime of which he was accused. Nevertheless, Carrouges, who believed his wife, stabbed the sword into the body underneath and made him die.”

While Jager and other historians may never know the truth, Affleck and The Last Duel writers feel strongly that Marguerite’s account is the accurate one. “Very quickly, we recognized that the film has a clear point of view on who’s telling the truth. And that this incredibly heroic character, Marguerite de Carrouges, had this story that deserved to be told,” Affleck told The New York Times. “It was evident that it was going to be an exploration of the dynamics of power, roots of misogyny and survival in medieval France.”

More like this
Gabby Petito’s Family Responded To The New Lifetime Movie About Her Final Days
By Grace Wehniainen
A New Scooby-Doo Movie Confirmed Velma Is Gay & Twitter Is Pumped
By Radhika Menon
Everything You Need To Know About ‘Black Panther: Wakanda Forever’
By Bustle Editors
Christian Bale Sang With Taylor Swift & His Daughter Can't Believe It
By Radhika Menon
Get Even More From Bustle — Sign Up For The Newsletter