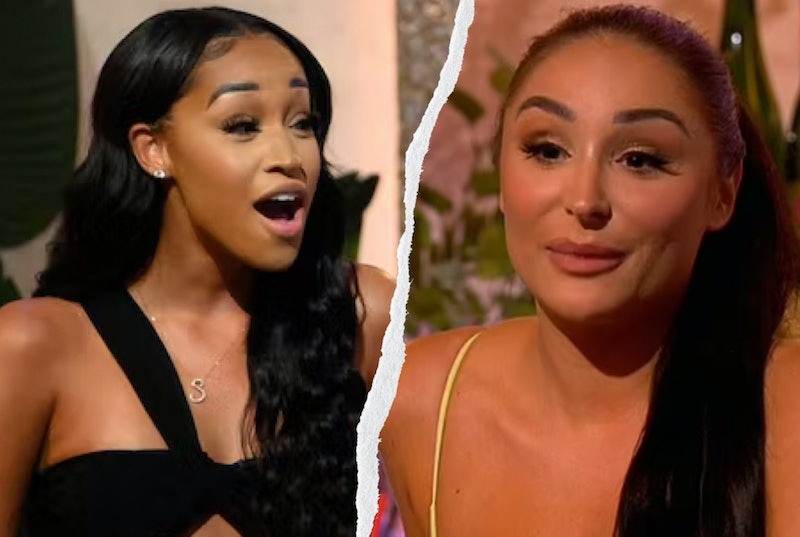 After a week apart, there was still drama among certain islanders during the Love Island 2022 reunion on Aug. 8 — just not between those you might expect. Summer Botwe and Coco Lodge stole the show with their peculiar beef, leaving fellow Love Island contestants, the live audience, and viewers at home very confused. So, what exactly happened between the two, and what were they arguing about?

Towards the end of the show, the ladies, alongside Josh Samuel Le Grove and Billy Brown, joined co-presenter Darren Harriot at the bar. When asked by Harriot whether there’s been any action on the outside, Summer — who has been on a few dates with Josh since leaving the villa — said: “I know someone who wishes they had got with someone.” She was seemingly making reference to comments made by Coco on Grace Keeling’s podcast Saving Grace, where Coco claimed that she and Josh “could’ve slept together” after they were dumped from the villa. Amid gasps from the audience, Coco responded to Summer with: “If you can’t handle a big personality, don’t go on reality TV.” Summer then said: “Friends don’t say certain things, hun.” To which Coco, referencing Josh, hit back with: “OK, well he's been moving mad.”

It was an awkward exchange, to say the least. But according to finalist Dami Hope, the drama was far worse in real life. Alluding to ITV heavily editing the scene before it aired, Hope tweeted that the TV version “was mid compared to what happened.”

Fortunately, members of the audience have also taken to social media to share the tea, including Olivia Tollerson on TikTok. According to Tollerson, the podcast was “directly mentioned,” with Summer asking Coco: “Why would you say that you’re going to shag my man on a podcast?” Coco explained that she “didn’t care” and “went on a bit of a tangent where she just started talking about sex and having sex with people,” as Tollerson explained, which ended up being edited out.

“It was a bit weird, and everyone was kind of looking at each other,” Tollerson continued, adding that the finalists on the sofa were equally confused. It even got so bad that producers “were having to walk on set” as everyone began to realise that “this was off-script, this was a real argument.”

Once Harriot shut down the bickering, Coco walked off. “We all had to cheer her back on after the break because she just didn’t come back on set,” Tollerson said. Another audience member on Twitter said that after Coco left, “Luca ran over to Jay, Charlie, and Antigoni’s table to get the gossip, as the reaction on the sofa was a bit mad.”