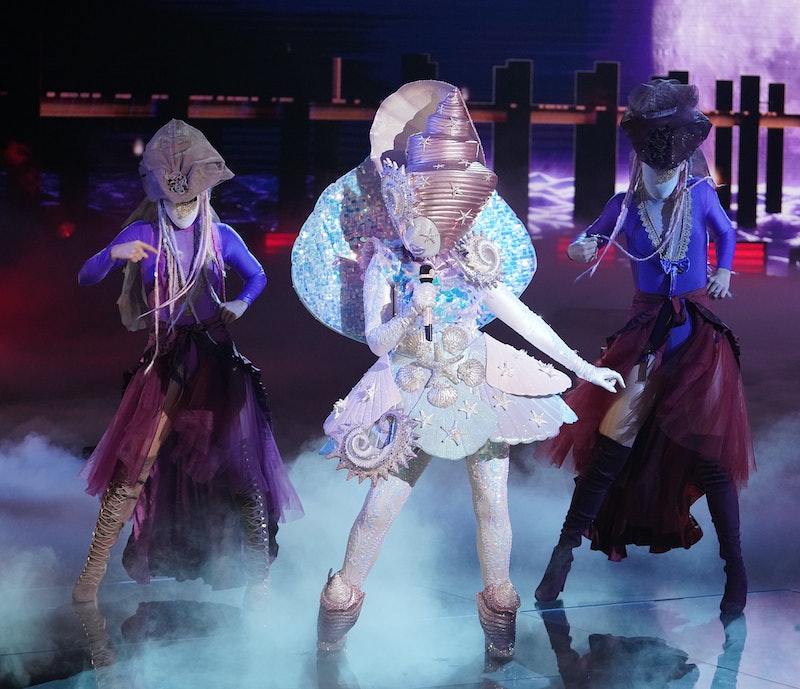 With The Masked Singer Season 5 in full swing, fans are starting to puzzle out the identities of each of the remaining singers — and that’s before any of the “wildcard” contestants are thrown into the mix. One singer who won over audiences early on is the pastel-colored Seashell. She performed a beautiful rendition of Roxette’s “Listen to Your Heart” in the premiere episode, and early judge guesses included Sarah Jessica Parker, Hilary Duff, and Jennifer Love Hewitt.

The current leading fan theory is that Seashell is Tamera Mowry, the co-star of the 1990s hit show Sister, Sister alongside her twin sister, Tia. (Though some fans guessed Seashell could be either of the two, based on her tone of voice, they think it’s more likely to be Tamera.) The clues align pretty well with the older Mowry twin. In the first clue package, Seashell said that when she was young, she “was pulled by the tide all around the world with my family.” She was always “adrift” and never felt grounded, so she “found her peace by the shore.” When her career took off, it was “a massive tsunami of success.” But she said much like her childhood, she still drifted, wearing “many hats.” She added that she still often wonders if she’s found her true calling yet.

The visual clues in the package included a bratwurst with relish on it, a green chameleon, a big cowboy hat, a witch’s broom, and a gonging bell. Cluedle-Doo then dropped a clue that said no two shells are the same, pretty much confirming that Seashell is a twin.

Mowry and Tia were born in Germany to a U.S. military family, which ties in to the bratwurst clue. They then grew up in Killeen, Texas, per a 2013 Forbes article, which explains the numerous Texas motifs in Seashell’s clue package, including the cowboy hat. Their career path could also be described as a “tsunami.” As Tia explained to Forbes, “We came from Texas to LA with my mother on a two month ‘trial’ to see if the [entertainment] business was really for us ... We ended up meeting a talent scout who saw potential in us and arranged for us to meet the people who would eventually create Sister, Sister.”

“We had already loved to sing and dance and wanted to take our talents further,” Mowry added. She said that their mom promised to move them out to California if they could prove that being actors was a viable career for them. So within that month, at just 11 years old, they booked a commercial and then eventually met Sister, Sister producer Irene Dreayer. “It all happened so fast,” Mowry said.

On top of that, the green chameleon clue could be hinting at Mowry’s role in the popular 1990s series Are You Afraid of the Dark?. In 1995, the actor appeared in the episode “The Tale of the Chameleons,” where she played the Evil Chameleon. And the broom clue could be a hint for her and Tia’s 2005 Disney Channel movie, Twitches.

Seashell told the judges that she “used to sing way back in the day,” and being on The Masked Singer is a nice way to return to her roots. While these clues could all be cleverly misleading audiences, right now it seems like Seashell really is Mowry. “I want to sing so badly,” she told Oprah Magazine in 2020. “I will sit there in the morning in my shower, at night in my room, and I will just sing.”

More like this
Every Celebrity From 'The Masked Singer' Season 8 Revealed Or Rumored So Far
By Gretchen Smail and Brad Witter
Kesha Is Down To Be The Next Bachelorette
By Jake Viswanath
The 'Love Is Blind' Season 3 Trailer Teases A Possible Fiancée Swap
By Kadin Burnett, Grace Wehniainen and Gabrielle Bondi
Everything To Know About 'Bling Empire: New York'
By Kadin Burnett
Get Even More From Bustle — Sign Up For The Newsletter