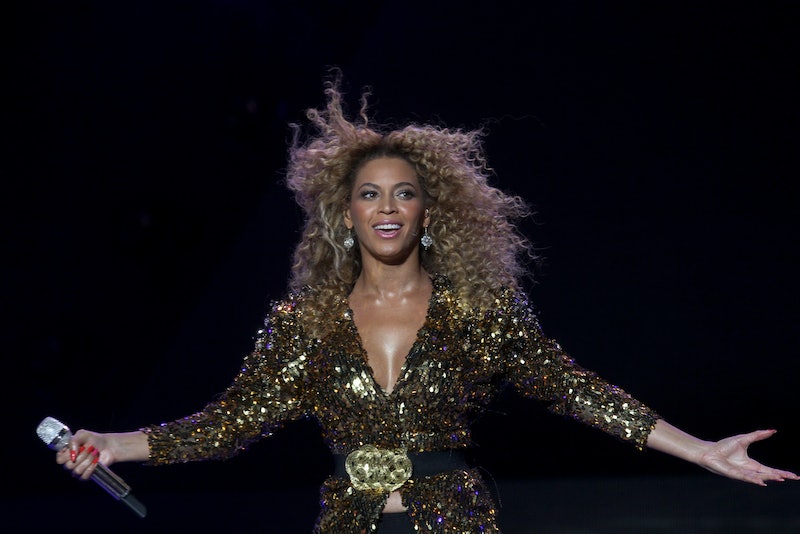 Happy Bey Day! Beyoncé finally dropped her much-awaited album Renaissance on July 29, six long years since she the release of Lemonade. And already Beyhive Twitter is beside themselves, frantically picking favorites and prophesizing which songs will become hits first. One strong contender is “SUMMER RENAISSANCE,” the last single on Queen Bey’s 16-track album.

But it’s not just the “I Feel Love” sample and the makes-you-wanna-get-up-and-dance melody getting the Beyhive buzzing. The steamy lyrics also seem to be talking about her husband, Jay-Z. So what do the lyrics actually mean?

When Beyonce and Jay-Z first got married, the two got matching “IV” wedding tattoos on their fingers, the Roman numeral for 4. While it’s unclear if they’re numerology enthusiasts, the number holds a dear place in their lives since both their birthdays fall on “4,” their wedding was held on April 4 (or 4/4), and they have both used the number as album titles (Beyoncé’s 4 and Jay-Z’s 4:44). Even their daughter Blue Ivy’s name is a play on their favorite Roman numeral.

In 2017, she made a tweak to her tattoo, adding a few subtle changes to the “IV” lettering — making it look more like a “4.” (Though, some fans pointed out it also looks like a “J.”) Though it’s unclear whether the “Empire State of Mind” rapper also made changes to his wedding tattoo, his tatt is definitely what Queen Bey is talking about. And if that’s any indication of who she’s singing about the rest of the song, it could mean that Bey and Jay are in a good place in their marriage.

In 2016, the typically private Destiny’s Child alum shocked the world with Lemonade, a poignant visual diary slash daring confessional that clued fans in on the couple’s marital problems. (Remember a bat-swinging Beyoncé in “Hold Up”?) She even hinted at Jay-Z’s alleged affair with a certain Becky With The Good Hair in “Sorry.”

In a rare interview, Jay-Z later admitted the affair in an interview with The New York Times in November 2017 and said that the two worked on their marriage despite the difficulty. “You know, most people walk away, and like divorce rate is like 50 percent or something ’cause most people can’t see themselves. The hardest thing is seeing pain on someone’s face that you caused, and then have to deal with yourself.”

A year later, he spoke even more about the couple going to therapy to save their marriage. In January 2018, Jay-Z told CNN’s Van Jones, “For us, we chose to fight for our love. For our family.” And later, in April, he spoke about saving his marriage again telling David Letterman, “We did the hard work of going to therapy and you know, we love each other, right? So we really put in the work.”

The rest of the lyrics to “SUMMER RENAISSANCE” feels crazy in love, if not extremely, er, passionate. Among the explicit details she sings, she even appears to talk about role-playing and more. “I'm feeling way too loose to be tied down / Can you see my brain open wide now? / Come and get what I came for, hella night now / Know you love when I roleplay, who am I now? / I'm a doc, I'm a nurse, I'm a teacher / Dominate is the best way to beat ya.”

On June 30, Bey took to Instagram to post about her upcoming album allowing her “a place to dream and to find escape during a scary time” and “feel free and adventurous in a time when little else was moving.” She added, “My intention was to create a safe place, a place without judgment. A place to be free of perfectionism and overthinking. A place to scream, release, feel freedom. It was a beautiful journey of exploration.”

In the song’s chorus, Bey sings, “It’s so good, it’s so good.” Though the lyrics are raunchy and could be taken literally, it could also mean that after six years of repairing their marriage, Bey and Jay have finally settled in a “good” spot.

More like this
Stormzy’s “Mel Made Me Do It” Is A Tribute To Black Talent & Success
By Catharina Cheung
Mariah Carey Is Releasing Her “Lost” '90s Grunge Album
By El Hunt
Everything To Know About Taylor Swift’s 10th Studio Album, 'Midnights'
By Grace Wehniainen and Jake Viswanath
Lizzo Twerks While Playing James Madison's 200-Year-Old Crystal Flute Onstage
By Radhika Menon
Get Even More From Bustle — Sign Up For The Newsletter