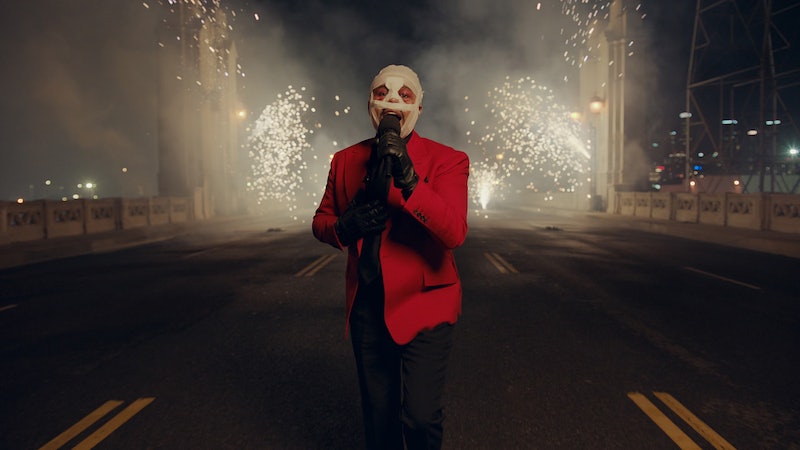 If you've been confusing The Weeknd with the Joker for the last year, you're probably not alone. The R&B singer kicked off his After Hours era by sporting a bloodied face in his music video for "Blinding Lights," and in his major performances leading up to his Super Bowl LV Halftime Show, he's been covering his face with more and more bandages. This has all led fans to wonder the true meaning behind The Weeknd's face. So allow me to explain.

In the Weeknd's recent videos and performances, he's been playing an unnamed character who goes through a never-ending cycle of high-speed car chases, anonymous hook-ups, and violence. It's not a far cry from his music catalog — The Weeknd has always sung about the highs and lows of love and drugs, at times exaggerating his own experiences with drug use. In a way, his intense After Hours aesthetic is a heightened portrayal and reflection of all the hits you've been singing along to for years. "He uses all of these metaphors to intentionally obscure the terrible realities of life," podcast host Charlie Harding remarked to Vox.

However, the look also carries a deeper meaning. In an interview with Variety, The Weeknd said the bandages reflect "on the absurd culture of Hollywood celebrity and people manipulating themselves for superficial reasons to please and be validated." And no, he doesn't care at all about looking good. "I suppose you could take that being attractive isn’t important to me but a compelling narrative is," he explained.

The singer also confirmed that his 2020 American Music Awards performance, where he was completely obscured in bandages, was a part of a narrative that hasn't ended just yet. "It’s all a progression and we watch The Character’s storyline hit heightened levels of danger and absurdity as his tale goes on," he said. Only time will tell if his halftime performance will end the story or just leave us with more questions.