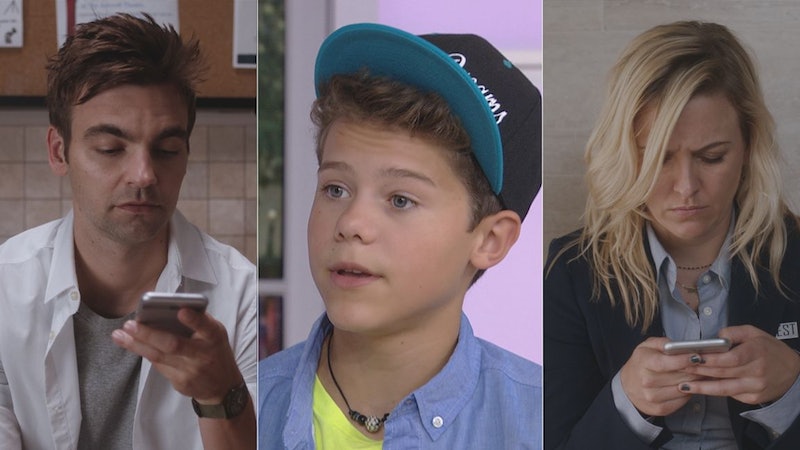 In The Other Two Season 1, Cary (Drew Tarver) and Brooke (Heléne Yorke) Dubek are catapulted into a world of fame and fortune — but none of it their own. When the show picks up, the two adult siblings are struggling to make sense of the fact that their 13-year-old brother Chase (Case Walker) has become an overnight phenomenon after his song “I Wanna Marry U at Recess” went viral. The season follows them as they slowly embrace their brother’s newfound celebrity and contend with their own shortcomings in life, love, career and...well pretty much everything else.

Ahead of Season 2’s Aug. 26 premiere on HBO Max, here’s what to remember about the show.

The fact that his kid brother became the new “It” guy with such little effort is particularly grating to Cary, who’s been trying to break into acting for years. When he does manage to land an audition, Cary — who is gay — is asked to play “more straight.”

Initially, Cary fights against his brother’s fame, wanting to carve an identity beyond being Chase Dreams’ brother. But after Brooke advises they “ride the wave,” Cary decides it’s time to take a page out of Chase’s playbook and goes big and flashy (which includes him sporting an unfortunate fake tan and frosted tips as a bartender on Watch What Happens Live).

Ultimately, this leads him to have a firmer vision of himself and his goals. By the end of Season 1, he’s learned to protect his interests, including firing his lackluster manager Skip (Richard Kind), who he discovered was driving cabs when he wasn’t listlessly putting Cary up for roles. It’s then that Cary lands a break: Netflix wants to do a Freaky Friday remake with him and Chase in the lead roles (the working title is “Untitled Brothers-Switching-Bodies-But-Not-In-A-Sex-Way Project”).

If Cary’s first instinct is to run away from sharing the spotlight with Chase, Brooke’s is to try to steal a bit of it for herself. She tries to cozy up with the famous people she meets at the parties Chase invites her to (only to find out one star she befriends is 11), and ultimately gets hired as Chase’s assistant after being fired from her realtor job.

From there, the first season sees Brooke paying her dues: crossing horns with Chase’s stand-in, opening fan mail only to discover the dark side of fan requests, fending off men who are only trying to date her to get close to her brother. But she also starts to genuinely worry about who is watching out for her brother as he gets asked to do wilder and wilder things to maintain his fame.

The Other Two is careful to show how indifferent and unchanged by fame Chase is. Even when he’s getting sick from eating raw eggs (to “jack up” for an awards show), he’s still a young teen who’s just happy to spend time with and support his family in their dreams. So no matter what happens to him — dying his tongue, filming a music video, or having his 14th birthday at a very adult club — he’s chipper as ever.

Still, that doesn’t make him immune to the trauma of being in the public eye. When he announces at his album’s release party that part of the sales will be donated to the American Cancer Society in honor of his father’s death from cancer, the truth comes out. Cary, Brooke, and Pat all hid that their father abused alcohol, and froze to death on the roof of their home as a result. Pat has a meltdown and confesses this to Chase in the middle of his party, which lands him an invite to perform at the MTV Video Music Awards.

With Brooke newly anointed as assistant manager, she takes the opportunity to let Chase’s true self shine, rejecting Streeter’s plans for elaborate costumes and sets in favor of something simple. But the performance is disastrous: it turns out Chase can’t sing, a truly unfortunate thing to be revealed live at an awards show. Never down for too long, Chase decides to take some time off (or retire forever) and go to college, potentially upending the career plans that both Brooke and Cary had made around his career.

At first Pat seems like the classic whimsical, erratic stage mom, eager to hand over control of her kid’s future while she sits back and does her own thing. Along the way, she starts to attract surprising attention, first being interviewed on Watch What Happens Live about her new children’s book, then getting high on molly and starting to date Streeter.

Ultimately, she’s the one who sets up the big finale twist: just as Chase is deciding to walk away from showbiz, Pat gets her own talk show, The Pat Dubek Show. Whether this will be a footnote on her “year of yes” or the latest thing Brooke and Cary have to orbit around to advance their careers will be the thrust of Season 2.

More like this
The 'Gossip Girl' Reboot Creator Is “Looking For A New Home” To Air A Potential Season 3
By Brad Witter
Here’s What Happens To Bill & Frank In 'The Last Of Us' Video Game
By Brad Witter
The 8 Best Aidan Shaw Moments On 'Sex And The City'
By Grace Wehniainen
'The Last Of Us' Video Game Revealed Tess’ Fate In The HBO Series
By Brad Witter
Get Even More From Bustle — Sign Up For The Newsletter
From hair trends to relationship advice, our daily newsletter has everything you need to sound like a person who’s on TikTok, even if you aren’t.