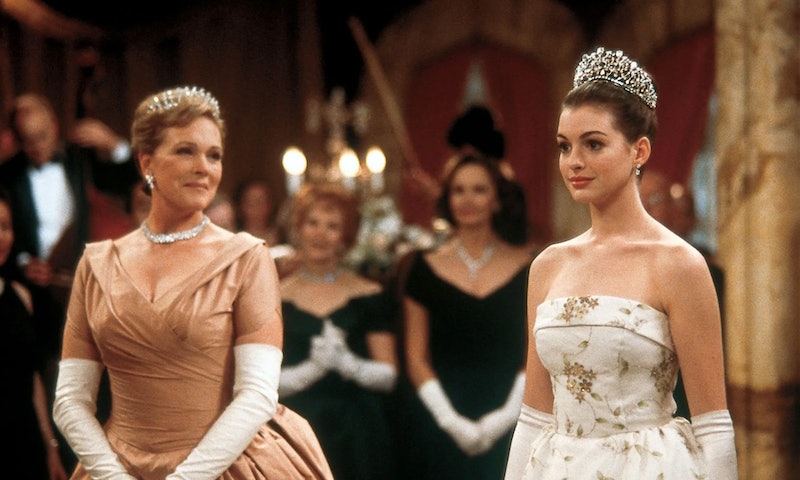 After what has felt like a lifetime, The Princess Diaries and its sequel, The Princess Diaries 2: Royal Engagement, will soon be getting another instalment. Remember the plain Jane to Princess Mia makeover that Anne Hathaway’s character went through? Or how about Fat Louie’s plush cat bed? The second movie also gifted the world with Chris Pine as the charming and snarky Lord Nicholas Devereaux. Now, 18 years later, The Princess Diaries 3 has been confirmed. Below, discover everything you need to know about the upcoming film.

Speaking in Jan. 2023, lead star Hathaway said it is “thrilling” to see the “level of excitement” for the forthcoming third chapter, and acknowledged that waiting for The Princess Diaries 3 to finally hit cinemas is “probably very frustrating” for longtime fans.

“We feel the exact same,” Hathaway told People. “It’s a process that requires patience, and so everybody should consider themselves a part of the movie business now because this is how long it actually takes to make things.”

A quick primer: The Princess Diaries follows Mia Thermopolis (Anne Hathaway), an awkward and shy California-based teen, who discovers she is, in fact, the princess of a European land. She then has to learn how to be a royal from her estranged grandmother, played masterfully by Julie Andrews. In the second movie, we see Mia adjusting to life as a Genovian royal subject.

The movies are based on YA author Meg Cabot’s novels of the same name. While the upcoming film’s plot is unclear at the moment, it is expected to continue the story from the last two movies, instead of rebooting the narrative.

Hathaway has consistently expressed interest in returning to the popular franchise along with her on-screen grandmother, Andrews. She previously opened up about there being a script whilst on Andy Cohen’s Watch What Happens Live in 2019. More recently, in October, she told Entertainment Daily, “I would more than entertain it, I'm pulling for it. If there's any way to get Julie Andrews involved, I think we would make it work. We would go to where she was and put a green screen behind her and just make it happen.”

On the other hand, Andrews previously told The Hollywood Reporter her return would be unlikely. “I think it would be too late to do it now. Especially me, it’s too far down the line now to go back to it. It’s a lovely thought, but I don’t think it would probably be possible,” she noted. Presently, neither actor has confirmed or denied their appearance in the upcoming movie, but fans are eagerly manifesting their roles. Mandy Moore, who played classic high school mean girl Lana Thomas, also remarked she would be “game to return” in a sequel when she appeared on The Drew Barrymore Show in August.

With the film’s announcement just fresh out of the oven, we’re looking at a long wait before any release date is mentioned. While the first two films were directed by the late Garry Marshall, Disney is yet to reveal who will be at the helm of The Princess Diaries 3. However screenwriter Aadrita Mukerji has been roped in to write the script, while Debra Martin Chase, who was a producer on the first two instalments, will return as well.

This article was originally published on November 16, 2022