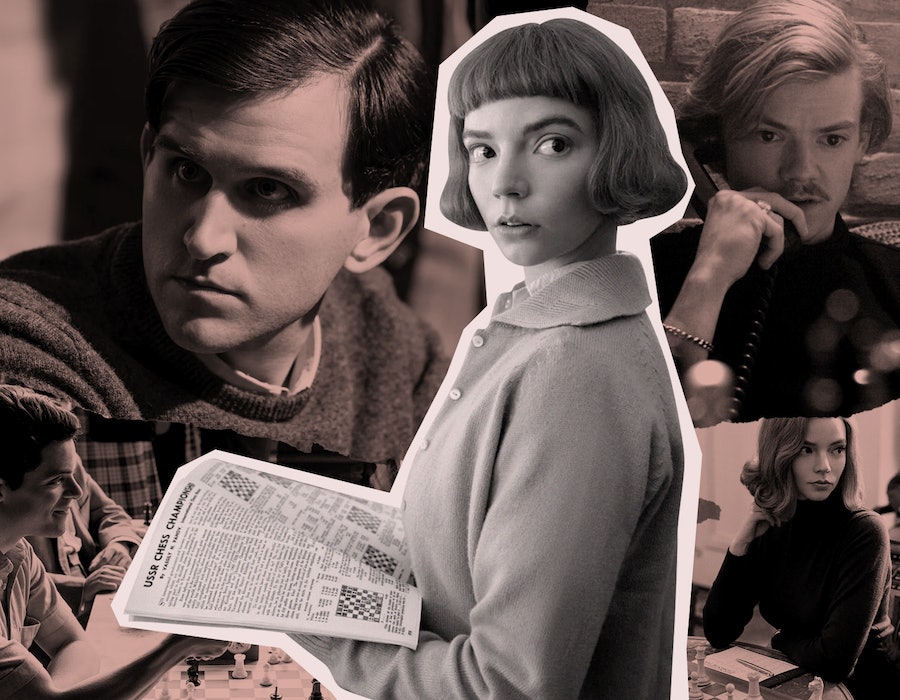 Watching The Queen’s Gambit on Netflix has caused me to do two things I never in my life thought I would do: one, stream 40-plus minute YouTube videos about chess strategy, and two, be attracted to a Necklace Guy in a cowboy hat.

If you haven’t seen it yet, the show follows the journey of a Kentucky orphan, played by beautiful deer-alien Anya Taylor-Joy, as she becomes a chess champion in the 1960s, and it is the sexiest television show I have ever watched. Forget moody vampires or 20-year-olds with washboard abs playing high-schoolers — the hottest thing in television right now is two people sitting across a chess board and concentrating.

The show itself is shot exquisitely, and every single outfit that Anya Taylor-Joy’s Beth Harmon wears is so beautiful I found myself spending most of my time idly scrolling for swingy A-line dresses and knit caps to buy. Taylor-Joy’s performance is unsurprisingly wonderful — nuanced and funny and serious in all the right moments — but the real surprise, the unexpected bishop sliding forward to put the viewer into inescapable check-mate, is the show's supporting male cast.

Over the journey of Beth Harmon’s life she encounters a series of dreamy chess-playing boys who adore her in the best possible way. They are powerful forces of benevolent masculine energy, capital-N Nice Boys that would be right at home in a Nancy Meyers movie (see: The Intern, Home Again, or John Krasinski in It’s Complicated).

First up we have Harry Beltik, a Kentucky champion played by Harry Melling, who you might recognize as the actor who played Dudley Dursley in the Harry Potter franchise. How have I not seen a thousand tweets about how Dudley Dursley has Neville-Longbottomed?! (I know — “read another book” — but come on, it’s a relevant cultural touchtone!) He has fully Neville-Longbottomed! Melling is now genuinely hot, especially once his character gets his teeth fixed, and what makes him even hotter is how much he cares about Beth and wants her to be good at chess.

The same is true for the show’s real wild-card sex icon, Benny Watts. Benny dresses like a Young Indiana Jones half-heartedly going as Jack Sparrow for Halloween. Like the kid in your AP English class reading the Communist Manifesto in the back of the classroom, or like Crocodile Dundee going to Westworld. It’s magnificent. We get a cowboy hat, a long leather duster, a knife on his belt. There are multiple necklaces. A ring and a bracelet. And all of it perfectly capped off by the thinnest mustache seen outside of a Columbo villain. My only sadness is that this show didn’t come out a month earlier so I could have had a few weeks to assemble the necessary stainless-steel jewelry and talk my boyfriend into dressing up as him for Halloween.

Every single one of the actors I’ve mentioned is a Brit doing an excellent American accent. Good job, gang!

And, for those who love to indulge in the ritual of “want to feel old,” Benny Watts, fictional chess desperado, is played by Thomas Brodie-Sangster, the little drummer boy from Love, Actually.

Love, Actually boy has sex! And a tiny mustache!

Rounding off the show’s main Nice Boy trio is Jacob Fortune-Lloyd who plays Townes, the dreamboat of the chess world whom Beth falls in love with early on and eventually forms a friendship with. Not much needs to be said about Townes other than the fact that he is objectively dreamy, and that every single one of the actors I’ve mentioned, including Fortune-Lloyd, is a Brit doing an excellent American accent. Good job, gang!

The friendships Beth cultivates with the boys around her — including an additional pair of adorable chess-loving twins — add a necessary vein of wholesome sweetness to a show unafraid to veer into human darkness. Without spoiling anything (please do watch it), there’s a scene where Beth receives a phone call to find all of her boy-friends on the other end, supporting her as a team, and it moved me to tears.

Sexy abs or leather trench coats are all well and good, but The Queen’s Gambit reminded me that one of my favorite dynamics to see on screen is a genuine friendship between people who love each other. Whether they have or had sex is immaterial — it exists just as plainly between Monica and Chandler on Friends as it does between Abed and Annie on Community, or Wallace and Veronica on Veronica Mars.

Nothing — not even hats and leather trench coats — is sexier than kindness and support.