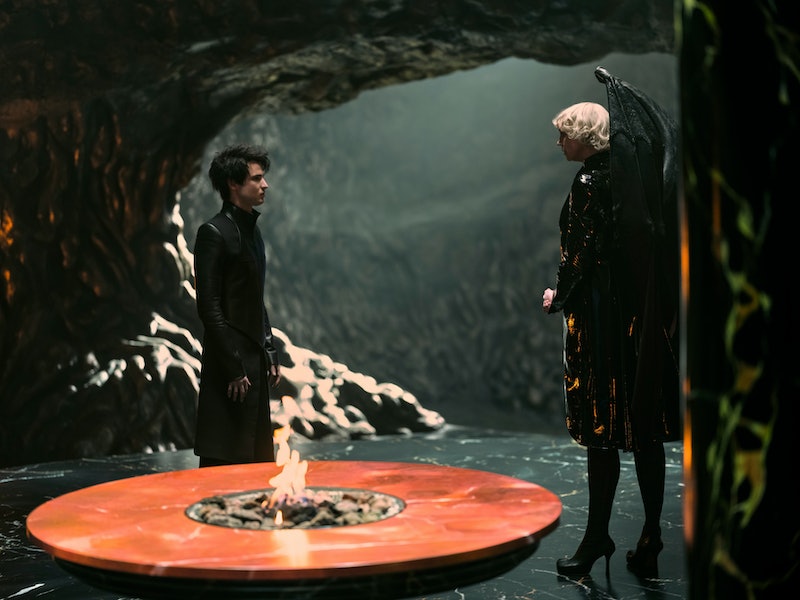 Major spoilers ahead for The Sandman Season 1. The Sandman’s journey to the silver screen was over 30 years in the making. First published in 1989, Neil Gaiman’s comic book series grew in size and readership through 75 volumes of a story about a god called Morpheus and his powerful ability to control dreams. While there were several attempts at adapting the fan-loved series, it wasn’t until 2020 when Gaiman and showrunners David Goyer and Allan Heinberg teamed up with Netflix to start production on a TV series adaptation. Now, The Sandman has finally debuted its first season, and fans are curious about which scenes from the comics were included and what was left on the cutting room floor.

The 10-episode first season chronicles the first two volumes — 16 issues — of the comic book series. These chapters follow Morpheus, aka Dreams (Tom Sturridge), as he escapes from imprisonment and tracks down the powerful tools he uses to watch over his ethereal kingdom. Along the way, we see more of Morpheus’s world and how his fellow gods interact with (and sometimes manipulate) humans on Earth. While the start of the season laid the groundwork for a sprawling story, the ending sets the stage for a potentially bombastic Season 2. And it makes a few surprising departures from the source material in the process. Let’s break down the Episode 10 ending and how it differs from Gaiman’s comic books.

The Season 1 finale opens with a standoff between The Corinthian (Boyd Holbrook) and Morpheus, as the adversaries reveal to Rose Walker (Vanesu Samunyai) that she is a vortex. This powerful entity can collapse and destroy worlds. The Corinthian wants to use Rose’s power, whereas Morpheus intends to destroy it, which means killing her. As Morpheus kills The Corinthian and dispenses with his serial killer followers, Rose escapes.

Conflicted, Rose is afraid to dream as that’s when her ability is most potent and could cause the universe to break. But she eventually succumbs to sleep, and Morpheus confronts her in the dream world, along with Gilbert, aka Fiddler’s Green (Stephen Fry). Gilbert offers himself as a sacrifice, but Morpheus rejects his offer and changes Gilbert back to his natural form — a flourishing green meadow in the Dreaming.

Just as Morpheus is about to kill Rose, they’re interrupted by Unity Kinkaid (Sandra James-Young). Unity is Rose’s grandmother and was initially destined to be the vortex. However, because Morpheus’ imprisonment caused Unity to remain in a coma for decades, the vortex skipped two generations to her granddaughter. Unity explains she was impregnated by a golden-eyed god during her comatose state and gave birth to Rose’s mother. Unity strips Rose of her vortex ability, thus sacrificing herself to save her granddaughter.

Rose safely returns to her little brother Jed. At the same time, Morpheus tracks down the golden-eyed god, Desire (Mason Alexander Park), who is also a member of the Endless — a group of deities with vast power and influence. Morpheus explains that Desire fathered a child with Unity, knowing it would create the vortex, and reminds Desire that the Endless are servants of humans, not the other way around.

Near the end of the season, Morpheus begins working on new dreams and revives Gault. He asks Lucienne (Vivienne Acheampong), his trusted librarian of the Dreaming, to take care of things while he works and even gives her the skull of The Corinthian for safekeeping. As the finale comes, the show takes us back to Hell, where Lucifer (Gwendoline Christie) meets with the demon Azazel, who insists that Hell expands its borders to take over the Dreaming and the mortal realm. Taking in Azazel’s advice, Lucifer says that she plans to bring Morpheus to his knees. And with that, it sounds like The Sandman is setting up a big rematch between Morpheus and Lucifer for Season 2.

How Is The Sandman Different From The Comic Book?

For the most part, the Netflix show isn’t far off from Neil Gaiman’s comics. At the end of Volume 2, Morpheus still hunts Rose to destroy her and the vortex; Gilbert shows up and hopes to save Rose’s life. Just like in the TV series, Morpheus rejects Gilbert, and Unity arrives in the knick of time. The story continues to unravel in the same way as the adaptation, with Unity sacrificing herself for her granddaughter. The comics also see Morpheus confront Desire for the god’s role in creating the vortex.

Where the endings diverge is in the aftermath of Unity’s sacrifice. The Netflix series sees Rose write a book about her experience in the Dreaming. But in the comics, Rose is far more depressed and shaken by the events that led up to her grandmother’s death. Another significant change is the final scene of Season 1. Lucifer’s plans to take down Morpheus don’t exist in the first two volumes of the comic book series. While Lucifer does face the dream god again later in the comics, it seems like the TV series is trying to up the stakes and set up a new direction for Season 2 if the show is renewed.

As Neil Gaiman told Bustle, they have planned to adapt the entire Sandman series. “We’ve shot footage in Season 1 that we would need if we ever get to Season 5,” the author said. “We know how we would do the entire Sandman storyline up to and including the last one, Sandman Overture.”

While the show has made changes — both big and small — to the source material, fans can rest assured that the team behind the show is setting out to tell an all-encompassing version of the comic books.

More like this
Nicola Coughlan Shared A Lady Whistledown Excerpt From ‘Bridgerton’ Season 3
By Grace Wehniainen, Alyssa Lapid and Sam Ramsden
Viserys’ Fate On 'House Of The Dragon' Could Differ From The Book In This Surprising Way
By Grace Wehniainen
Alicent's Green Dress In 'House Of The Dragon' May Be An Act Of War
By Kadin Burnett
'The Rings Of Power' Episode 4 May Put A Face To Season 1’s New Villain
By Kadin Burnett
Get Even More From Bustle — Sign Up For The Newsletter