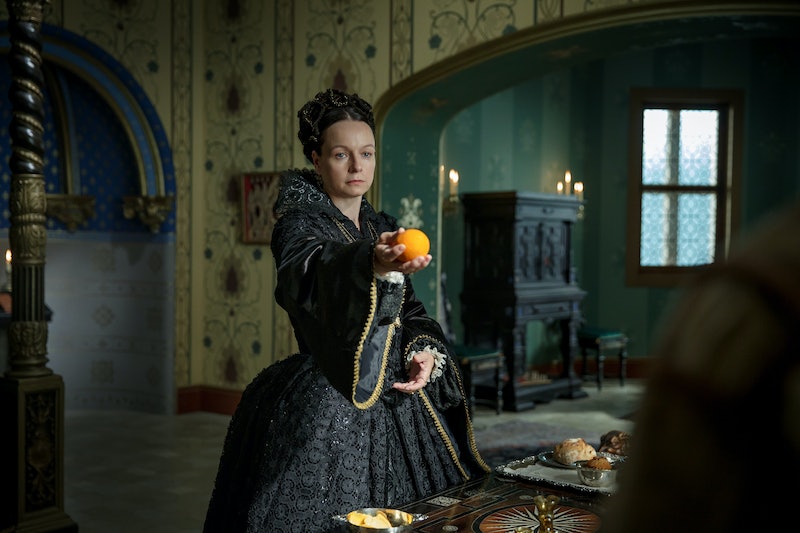 From Bridgerton to The Crown, there’s been a growing appetite for royal periodical dramas — and The Serpent Queen is the latest to add to the list. Released on Sept. 11, the STARZPLAY series is available to stream in the UK via Amazon Prime Video. Created by Justin Haythe and based on Leonie Frieda’s 2003 book Catherine de Medici: Renaissance Queen of France, the show stars Samantha Morton as the adult version of Queen Catherine. But is The Serpent Queen based on a true story? Here’s what we know so far.

Because Catherine de Medici is non-fiction, the TV series is, in turn, based on a true story. “Writing Catherine and her story has been truly exciting as she is a very complex leading character who becomes a skilled ruler, battling extraordinary political and personal odds throughout her reign,” Haythe told The Hollywood Reporter. “She is a Queen who defies convention, as she relies upon her intellect, her unusual entourage and a ready supply of black magic inspiring, centuries later, the Evil Queen of fairy tales.”

The series does take some liberties, however, including with her upbringing and portrayal as a commoner (in reality, although she wasn’t a royal, she was considered an aristocrat). What is true, however, is the fact her husband, King Henry II of France, was actually in love with an older woman, Diane de Poitiers. And while the series paints the two women in opposition, biographer Nancy Goldstone told IndieWire in an interview that each woman knew she needed the other.

Another divergence is in how the show portrays the queen’s personality: Historians often give a brutal depiction of Queen Catherine de’ Medici; The Serpent Queen, however, paints the royal as more subtle. “She’s someone that’s very reserved,” Morton said at the Television Critics Association summer press tour. “She thinks things through. She doesn’t feel the need to have knee-jerk reactions to anything.”