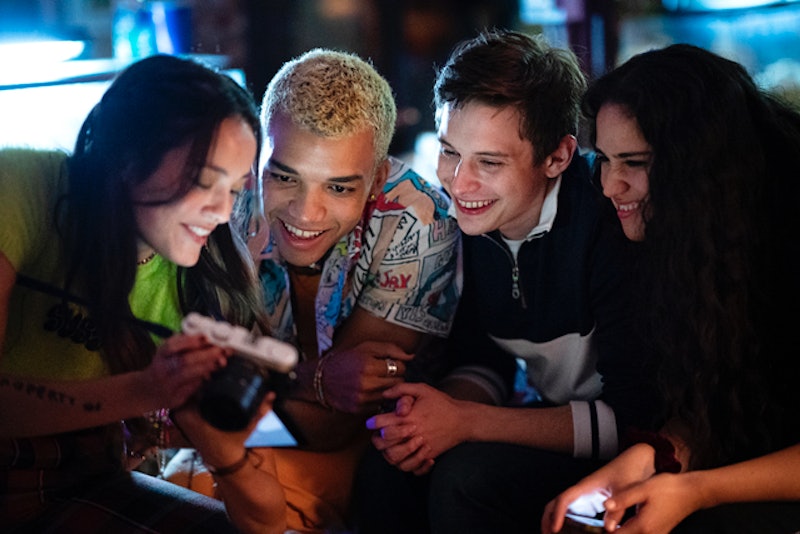 via the Warner Media press site

Even as it pokes fun or pushes the envelope, Genera+ion, the new HBO Max show that follows a group of teens surfing the tricky waves of sexuality and coming of age in their buttoned-up community, is careful to keep every part of itself grounded.

The series was created by 19-year-old Zelda Barnz (along with her director father Daniel Barnz), who hopes every aspect of it feels real — even down to the painstaking time it takes to type out a text message one letter at time. “I definitely think it’s important to see kids use their phones the way kids really use their phones,” Barnz told The A.V. Club.

That philosophy seemingly extends to the show’s music as well. For the kids just starting to figure out their personal boundaries on Genera+ion, music is more than just a soundtrack or a playlist. Tunes play everywhere they go, and Genera+ion uses lyrics to narrate and ground even its loftiest storylines.

Music can be the pep in your step during a feel-good moment, or it can be the grating Christmas playlist piping through mall speakers as your friend’s day becomes a nightmare. Genera+ion’s soundtrack feels true to life in that way, like when the song that plays as Chester (Justice Smith) struts through the schoolyard to entertain an onlooker seamlessly becomes the one he plays in his headphones as he ogles his new crush, the guidance counselor.

It’s no surprise that Genera+ion has an eclectic soundtrack that’s easy to get in the groove with. Like the teens on the show, the song choices represent a range styles and vibes — coming together to create a perfect playlist, no matter what your mood.

Here are all the songs from Genera+ion, divided by episode:

“Joy to the World” by Zach Dawes

“What’s Your Pleasure” by Jessie Ware

“Can I Be the One” by Daydream Masi

“I Drive Me Mad” by renforshort

“Born This Way” by Lady Gaga

“Dive” by The Seshan

“Ways” by Tasha the Amazon

“Time (You And I)” by Khruangbin

“I Love It” by Icona Pop ft. Charli XCX

“Now That You Need Me” by Taylor McFerrin

This article will continue to be updated as Genera+ion airs.