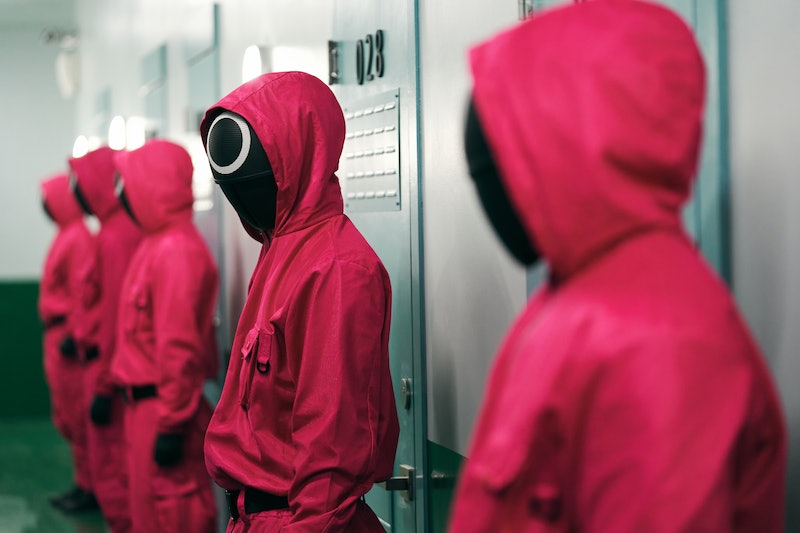 Spoilers ahead for Squid Game Season 1. Nothing is as it seems in the Squid Game finale. Though the game does have a definitive winner, the show throws several twists into the final moments of the season, making it clear that while Seong Gi-hun (Lee Jung-jae) survived, the nefarious games are far from over.

To fully explain the Squid Game ending, let’s rewind a bit. Having survived a series of brutal children’s games, it comes down to just Gi-hun and his childhood friend Cho Sang-woo (Park Hae-soo), who will stop at nothing to win. Angry and heartbroken over Sang-woo stabbing Sae-byeok, Gi-hun faces off against Sang-woo in a final and no-holds barred squid game — a perfect reflection of the beginning of the show. “You’re the one who killed them,” Gi-hun says as he punches Sang-woo and weeps. He’s clearly the winner, but in yet another flash of kindness, he turns away from the finish line and offers his hand to Sang-woo. Sang-woo, however, is overcome with guilt about what he’s done to get to the end and is unable to accept. He apologizes and then dies by suicide, as the gold-masked VIPs watch passively from an enclosed balcony.

Later, Front Man (Lee Byung-hun) explains that the games were created as entertainment for the rich. “You bet on horses. It’s the same here, but we bet on humans. You’re our horses,” he says. Gi-hun never sees Front Man’s face, and he’s dropped off on a random street. He coughs out a credit card, which shows him that the 45.6 billion won has been deposited into his account.

Shell-shocked, Gi-hun returns home to see his ailing mom — the very reason he reentered the games to begin with. But he discovers her dead on the floor of their apartment, having succumbed to her untreated diabetes. Traumatized, Gi-hun drinks and doesn’t touch the money for a full year. He seems intent to keep it that way until an old woman offers him a rose by the beach. Attached to it is a black envelope with the game’s signature pink ribbon on it. “December 24. 11:30 p.m. Sky building, 7th floor. From your gganbu,” the card reads.

The only character who ever used the term “gganbu” was the sick and elderly Player 001, who Gi-hun believed he had beaten and thus killed in the marble game. But when Gi-hun arrives at the location, he sees Player 001 in a medical bed, covered in fine clothing and looking out the window. Player 001 reveals his name is Oh Il-nam, and, surprise, he’s the creator of the games. He says that he and his obscenely rich friends got bored, so they devised the games in 1988 — the first time South Korea hosted the Olympics — just to feel something. Il-nam then admits that he really is dying from a brain tumor, and asks Gi-hun to play one last game. Gi-hun wins — correctly guessing that someone would come to rescue the man freezing to death outside — but Il-nam dies before Gi-hun can grill him anymore.

Il-nam’s death would suggest the end of the games, but that’s not the case at all. All of the VIPs — presumably the friends Il-nam mentioned — are still alive, and we don’t know who they are. There’s also Front Man, who we learn is detective Hwang Jun-ho’s (Wi Ha-joon) older brother, Hwang In-ho. We still don’t know why In-ho became involved with the organization after he won the games in 2015, or what he plans to do going forward, but he seems determined to continue Il-nam’s legacy.

Another unexplained thread is whether the police know about the games now. In-ho shot Jun-ho, but it’s never confirmed if Jun-ho actually died or how much information got sent from his phone before his body hit the water. And we definitely don’t know what’s going on with the game guards. Who are all of these young men? Why do they live in prison-like conditions that practically mirror what the players experience? Are they also in debt in some way?

The final moments of the show confirm In-ho is moving ahead with the games. We see Gi-hun finally adopt Sae-byeok’s brother and give him to Sang-woo’s mom to care for — thus paying homage to his last two competitors. He leaves them with a bag full of cash and promises he’ll return. (Somewhere in there, he also gets a rather questionable haircut and dye job.) But as he’s heading onto a train to finally reconnect with his daughter, Gi-hun sees a man getting slapped across the platform by the mysterious game recruiter (played by Gong Yoo). He sprints across the platform and sees the man has been given the game card with a new phone number.

While Gi-hun started the show being self-serving, this new Gi-hun can’t let this revelation go. He turns away from his flight and calls the number. “I can’t forgive you for everything you’re doing,” he tells the man, assumedly In-ho, as he stalks away on a new mission. This is his final transformation, it seems, into someone who will hopefully prove to be a formidable match for In-ho. At the start of the series, Gi-hun couldn’t even peel himself away from the horse races to care for his daughter. Now, he’s someone who’s determined, as he says on the phone, to stop anyone else from being the game-makers’ “horse.”

This seems to suggest Gi-hun is out for revenge, but Squid Game creator Hwang Dong-hyuk told The Hollywood Reporter the ending is meant to carry a deeper message. "It’s true that Season 1 ended in an open-ended way, but I actually thought that this could be good closure for the whole story too,” he said. “Gi-hun turning back and not getting on the plane to the States ... was, in fact, my way of communicating the message that you should not be dragged along by the competitive flow of society, but that you should start thinking about who has created the whole system — and whether there is some potential for you to turn back and face it. So it’s not necessarily Gi-hun turning back to get revenge. It could actually be interpreted as him making a very on the spot eye contact with what is truly going on in the bigger picture.”