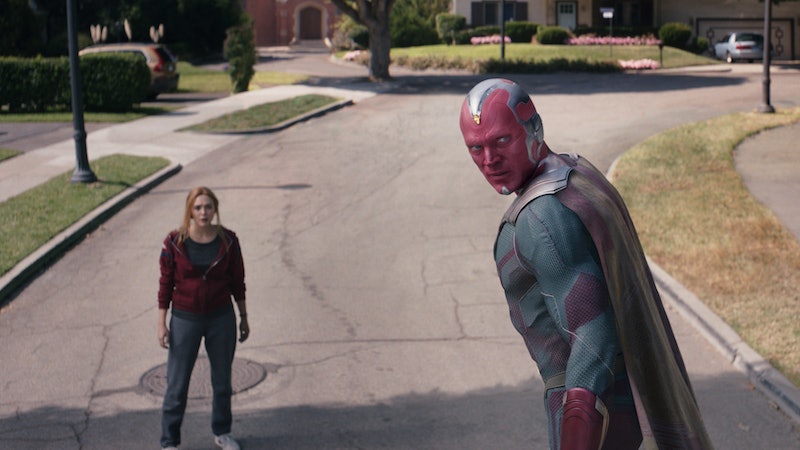 Spoilers ahead for WandaVision Episode 9, "The Series Finale." In WandaVision's Season 1 finale, Wanda finally steps into the full extent of her magical power as the Scarlet Witch. While she battles (and eventually defeats) Agatha Harkness using her newfound magical abilities, Vision works to reason with White Vision, helping him access the memories from his previous personality in order to free himself from Hayward's control. Eventually, Wanda reverses the hex that created the Westview bubble, freeing all of the townspeople — but also letting Vision, Billy, and Tommy disappear, as the spell she'd done to create them had tied their existence to the hex.

For many MCU fans, though, the juiciest parts of the episode came after the credits rolled. There are not one, but two post-credits scenes which together set the stage for the events of future MCU movies — more specifically, the upcoming Captain Marvel 2 and Doctor Strange and the Multiverse of Madness.

In the first post-credits scene, Monica Rambeau is approached by a woman who reveals herself to be a Skrull — one of the shape-shifting aliens first introduced to the MCU in Captain Marvel as intergalactic refugees fleeing oppression from another alien race. After showing Monica her true form, the Skrull tells her that an old friend of her mother's would like to meet with her somewhere in outer space. The Skrulls were last spotted in a post-credit scene from Spiderman: Far From Home, in which it was revealed that the Skrull leader Thalos and another Skrull Soren (who we first met in Captain Marvel) had been impersonating Nick Fury and Maria Hill while Fury lounged on a beach on some unknown planet. It's not entirely clear which friend of Maria Rambeau's sent the Skrull to find Monica, but it's safe to assume it could be Fury — both because he was last seen vacationing off-world and because of his long history with S.W.O.R.D. founder Maria Rambeau and her once-best friend Carol Danvers/Captain Marvel.

Though Captain Marvel 2 is still more than a year off, it's been confirmed that Monica Rambeau will be star in the upcoming sequel alongside Carol Danvers, and this scene hints that both Fury and the Skrulls could potentially be involved in that story. The majority of the Skrulls that have been introduced in the MCU so far have allied themselves with the Avengers and residents of Earth, but in the Marvel comics, the Skrulls have often been villains. An upcoming Phase 4 Disney+ series titled Secret Invasion promises to explore a popular Marvel comics crossover plotline where it is revealed that a number of key characters — including some of the heroes themselves — are being impersonated by evil Skrulls. With both Nick Fury and Talos already confirmed as stars in the Secret Invasion series, it's also possible that this post-credits scene with Monica is setting up the events of that show.

The second post-credits scene shows Wanda taking some alone time in a small house by the side of the lake in a quiet and beautiful mountain range. However, she's not just resting and sipping tea: she's astral projecting, letting her Scarlet Witch persona read the Darkhold, a powerful book of dark magic often also called the Book of Sins. During the finale, Agatha Harkness revealed the Darkhold has an entire chapter dedicated to the Scarlet Witch, which she claimed says that Scarlet Witch will destroy the world. But as her astral projection self reads the Darkhold, she suddenly hears the cries of her sons, Billy and Tommy, who supposedly vanished when Wanda reversed the hex keeping the town of Westview hostage.

The WandaVision finale dashed some of fans' multiverse hopes upon revealing that Evan Peters' WandaVision character was definitively not Quicksilver from the X-Men universe and was actually just Agnes's "husband" Ralph, a random human who she spelled into helping her deceive Wanda. However, the fact that Wanda was able to hear the voices of her children, who aren't even supposed to exist, hints that perhaps versions of Billy and Tommy are somehow still alive in an alternate universe. If that's the case, Wanda likely won't stop until she's able to reunite with her twin boys — a journey that will likely lead her right to the doorstep of Doctor Strange (or the New York City Sanctum Sanctorum, to be precise), a natural set up for the assumed reality-bending events of Doctor Strange and the Multiverse of Madness.

WandaVision may be over, but the post-credits scenes clearly show that Wanda's story — and likely that of Vision and their sons Billy and Tommy — is far from finished.