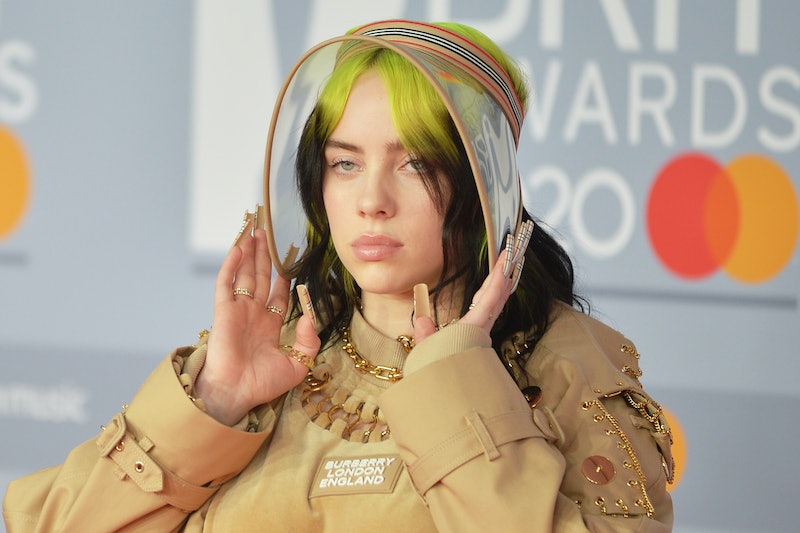 We're many months into the coronavirus pandemic and Billie Eilish just came through with something we've all been wanting lately: a trip to the mall. Earlier today, Nov. 12, the singer-songwriter dropped her new track "Therefore I Am" and a corresponding music video. The nearly five-minute-long visual shows the pop star galavanting past stores after hours, grabbing a pretzel and fries along the way, and eventually being kicked out by mall security.

It didn't take long for fans of the artist to sound off on social media about the new song and video, with Twitter unanimously crowning it a bop. "Therefore I am is really fire," one fan tweeted, with another calling it "empowering and badass." Other fans on Twitter said it made them excited for Eilish's next album. And while it's unclear when exactly we can expect the 18-year-old's sophomore release, the new track already has her fandom conjuring up album theories.

One popular theory looks at how some of the song titles, similar to Eilish's first album, could tell a complete story when you put them together. On her debut, titled When We All Fall Asleep, Where Do We Go?, the names of the final three tunes — "Listen Before I Go," "I Love You," and "Goodbye" — could be combined to tell a heartbreaking tale about leaving someone you love. Twitter user @bilslonely anticipates the same for what fans have dubbed BE2, with the title "Therefore I Am" being part of a longer sentence that we won't know until the singer drops a track list.

Many fans seem to agree with @bilslonely's theory: Another Twitter user posted a screenshot of an Instagram Story from Eilish that seems to support it entirely. In the pic, Eilish is wearing a sweatshirt that appears to have the word "therefore" on it. "If ya really dying to be teased here's a zoomed in picture of....?" the musician captioned the photo. "But we'll save this for another day."

In other theories, Twitter user @sladoll2x pointed out that "Therefore I am" was released the day before the one-year anniversary of Eilish's "Everything I Wanted" single. With that in mind, they put the two titles together to form a sentence that just might hint at the theme of Eilish's next LP. "Therefore i am, everything i wanted," they wrote. Could the pop star's next era be all about self-acceptance?

If it turns out to be true that the next release will be about personal growth, Twitter user @billieonthefan's theory makes perfect sense. The name of the song clearly references French philosopher René Descartes' famous quote, "I think, therefore I am." At its core, the well-known philosophical statement means to constantly learn more and grow as a person, which could be the primary theme of this next chapter in Eilish's career. In another tweet, the fan applied this reasoning even further, making an early assumption that the other songs on the album will detail her journey to a more positive mental state.

Although fans definitely have Thoughts about Eilish's new music, the singer was adamant about the song being "very, very up for interpretation" during an interview with Zane Lowe on Apple Music. "Therefore I Am" follows the release of her single "My Future," which was released in July. "I'm very curious to see what people get from it and also what they feel when they hear it," she said. "I don't know. But yeah, it's a little mean. I love it."

More like this
Everything To Know About Taylor Swift’s 10th Studio Album, 'Midnights'
By Grace Wehniainen and Jake Viswanath
Everything You Need To Know About ‘Black Panther: Wakanda Forever’
By Bustle Editors
Christian Bale Sang With Taylor Swift & His Daughter Can't Believe It
By Radhika Menon
Did 'Grey’s Anatomy' Just Drop A Major Taylor Swift Easter Egg?
By Grace Wehniainen
Get Even More From Bustle — Sign Up For The Newsletter