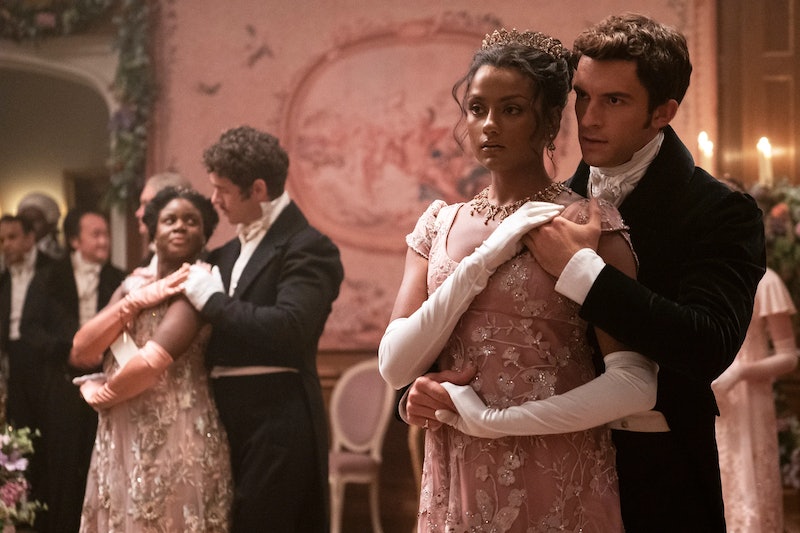 As badly as Bridgerton fans want to be transported back to Regency-era London, they've noticed some things in the series that didn't quite exist in the 1800s. These Bridgerton mistakes are reminding Game of Thrones fans of the Starbucks coffee cup that inexplicably appeared in the background during the HBO series' final season. What makes it more hilarious is that one of the modern-day gaffes is in the Netflix show's very first episode.

During the opening scene of Bridgerton Season 1, Episode 1, at around the 3:19 mark, a painted yellow traffic line can be seen on the side of the road where horse-drawn carriages pass by. According to the Daily Mail, yellow lines were not used on British roads until the 1950s, long after cars were invented in 1886. Some eagle-eyed viewers also noticed other modern mistakes in the series, including a poster from British clothing retailer Primark, a manhole cover, seedless grapes that didn’t exist until the 19th century, and a parking sign on a lamppost.

The historical mistakes in the hit Netflix series are very reminiscent of the now-infamous water bottle and coffee cup that were spotted in Game of Thrones, which takes place in the late BC and early AD eras (albeit in a fantasy world), long before there was a Starbucks on nearly every city street corner. Hey, at least cars were in Daphne and Simon's (distant) future.

Immediately, viewers took to Twitter to point out the mistakes for those who overlooked them. One social media user even recalled how some shows would paint over those yellow lines to prevent these errors.

However, other fans didn't take the mistakes that seriously, choosing instead to focus on the characters' intriguing storylines — or in the case of the Duke of Hastings and Viscount Anthony Bridgerton, their looks.

Less than a month after the release of Season 2 on March 25, 2022, the show reached over 627.11 million hours viewed — beating Season 1’s 625.49 million hours. Bridgerton fans are ecstatically following along with the show’s updates, eagerly awaiting more information surrounding Season 3, which will follow the love story of Colin and Penelope.

In an Instagram note posted by the production company, Shondaland, Lady Whistledown confirmed that the cast will return and revealed that “the upcoming season shall follow none other than the budding relationship between Mr. Colin Bridgerton and one Miss Penelope Featherington. With Penelope’s days as a wallflower wearing thin, will she finally take bloom? Time will tell, and as always, so will this author.” Bridgerton’s official Instagram has been consistently sharing a behind-the-scenes look at Season 2 for members of the ton who are anxiously anticipating the release of the next season.

Following the pattern of past seasons, knowing that the cast began filming Season 3 during summer 2022, fans could be expecting new episodes as early as spring or summer 2023. A Season 4 has also been confirmed by the production team — don’t worry, there are plenty of budding romances to come. “There are eight Bridgerton siblings, and as far as I’m concerned, there are eight Bridgerton seasons. And maybe more," Shonda Rhimes told Variety in 2021. Even though no mistakes have been spotted during Season 2, fans are sure to be on the lookout during the seasons to come.

This article was originally published on Jan. 25, 2021