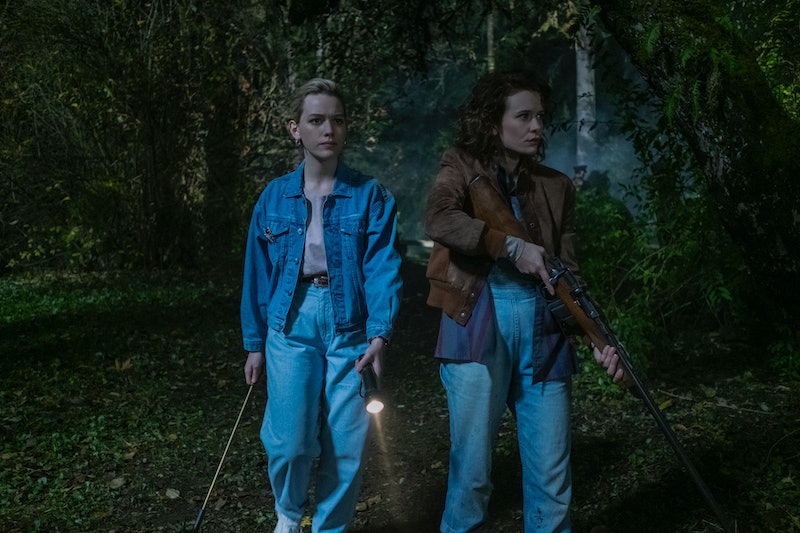 Spoilers ahead for The Haunting of Bly Manor. Despite all the sadness and death that took place inside Bly Manor, one of the happier storylines to develop was the love story between Dani and Jamie. And while the au pair ended up ultimately taking over as the new Lady of the Lake, leaving the gardener heartbroken and alone, one theory about Dani and Jamie's Bly Manor fate hints at a much happier ending than anyone may have realized.

Actors Victoria Pedretti and Amelia Eve — who played Dani and Jamie, respectively — recently shared their thoughts about the final scene at the end of Episode 9, which found an older version of Jamie falling asleep as a hand (presumably Dani's) gently rested on her shoulder. Some may have interpreted the hand to be wishful thinking on Jamie's part or perhaps the start of a dream she was quietly slipping into. However, speaking with BuzzFeed, the actors agreed that the moment indicates a much hopeful outcome, suggesting that this wasn't just a one-time occurrence and that perhaps Dani never really left Jamie after all.

“I think Dani is always with Jamie,” Pedretti explained to the outlet, while Eve agreed but added that she doesn't think her character is necessarily aware of Dani's presence. "I think if Jamie could have, she would have taken it off of Dani," Eve theorized, referring to the burden Dani took on in becoming the new Lady of the Lake. "But Dani wouldn’t let her and so that’s why Dani didn’t let Jamie know that she’s there but she is there this whole time.”

Series creator Mike Flanagan appears to share this opinion, having echoed similar sentiments during a roundtable interview with reporters. "I think Dani’s absolutely with her," he stated, as per Collider. "I think that’s the thing for me about a great love story is that even if you can’t see that person anymore, even if they’re gone, any kind of love, romantic love, familial love, deep friendship, even if you can’t see them anymore. The idea that you’re looking for them puts them with you, whether you can feel it or not.”

To Haunting fans, this might sound a bit naive, especially given that the previous ghosts of Bly Manor were unable to leave the grounds. However, once Dani let the Lady of the Lake into her mind and body, the curse was lifted, allowing all of the other spirits to move on and break the gravitational hold that had been tethering them there. Perhaps that means that all of the other former ghost rules no longer apply, meaning Dani is free to visit anywhere she likes during her waking hours. Or maybe her sacrifice in keeping both Flora and Jamie safe from harm was so selfless that it makes her (and her alone) an exception to the rule.

Either way, it'll make you want to go back and rewatch that final scene again to try and interpret what that hand really represents.

More like this
'The Queen’s Gambit' Season 2 Tweet Wasn’t From Anya Taylor-Joy
By Mary Kate McGrath, Jack Irvin and Grace Wehniainen
Netflix Shut Down 'Bridgerton' S3 Rumours About A “Very Dark” Storyline
By Bustle
The 'Freeridge' Cast Shared Their Hopes For A Potential Season 2
By Grace Wehniainen
You Might Want To Rewatch This Key 'On My Block' Scene To Understand 'Freeridge'
By Grace Wehniainen
Get Even More From Bustle — Sign Up For The Newsletter
From hair trends to relationship advice, our daily newsletter has everything you need to sound like a person who’s on TikTok, even if you aren’t.