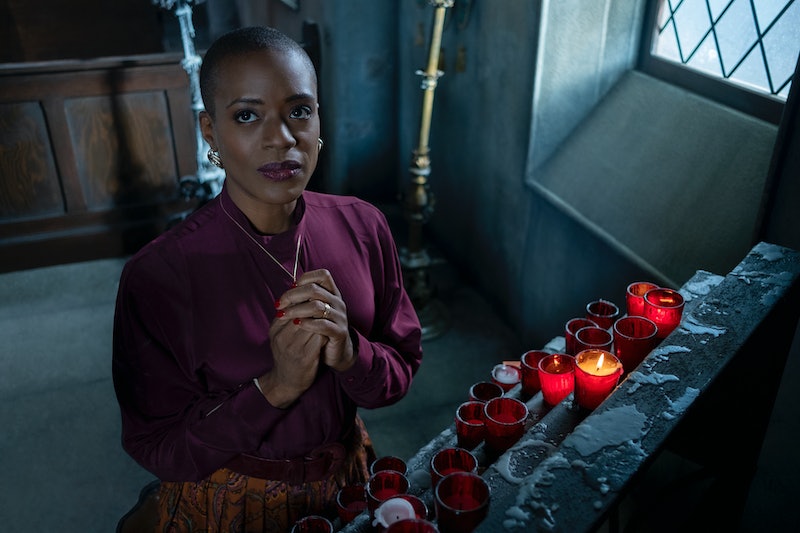 Spoilers ahead for The Haunting of Bly Manor. Many ghosts live within the confines of Bly Manor, but that doesn't necessarily mean they've come to terms with their fate. Such is the case for The Haunting of Bly Manor's beloved housekeeper Hannah Grose, who discovers in Episode 5 that she's actually been dead since Dani's arrival. It's a shocking discovery, for both Hannah and viewers, particularly because Hannah doesn't appear to possess any of the limitations all of the other members of the undead are forced to grapple with. For example, she can easily touch inanimate objects and change her clothes on a daily basis. So what makes her so different from the others? T'nia Miller, who plays the character, recently shared a possible theory as to what makes Hannah such a unique ghost.

"I think it’s that real sense of the patriarch we actually have created, where women, especially modern women, we work, as well as we’re mothers. We have a career. We are so driven that we don’t often have time to think of ourselves," Miller shared with TVLine during a recent interview. "I think it’s just sheer will and determination that, no, [Miles and Flora are] not her children, but as far as she’s concerned, they are her children. This is her family, and she’s like a lioness. She will fight to the death, literally, Hannah, goes there for these kids."

Unfortunately, it was that drive and loyalty that ultimately led to her demise. But it's also what Miller believes has allowed Hannah to defy ghostly rules, making her act alive even though she, well, isn't. For Miller, "that determination, that strong will, that fierce loyalty and protectiveness over her family" is what keeps Hannah going and living her life as if nothing ever happened to her.

"That [includes] Owen the chef, Jamie the gardener, and anyone who comes into that," she continued. "You could be there for two minutes or have been there for 10 years. Once you’re a part of her inner circle, she’s fighting for you, and it’s that determination that allows her to have a physical manifestation to be able to do and to touch things in the real world and imagine what outfit she’s going to wear that day."

Those capabilities have allowed Hannah to go about her daily routine and fool others — not to mention herself — into thinking everything's fine, which in turn made her death all the more shocking. In fact, not even Miller knew her character was dead until she read about it in the script for that episode, a tactic she credits to series creator Mike Flanagan. "Mike really is cheeky. He’s a cheeky bugger," she added. "I love his sense of play and adventure… He’s a flirt. He’s a flirt with these scripts. He is teasing you and getting you all riled up and then, you’re like, 'Oh.' That’s how he delivers."

More like this
'The Queen’s Gambit' Season 2 Tweet Wasn’t From Anya Taylor-Joy
By Mary Kate McGrath, Jack Irvin and Grace Wehniainen
Netflix Shut Down 'Bridgerton' S3 Rumours About A “Very Dark” Storyline
By Bustle
Ashton Kutcher Wants Danny Masterson “To Be Found Innocent” In Rape Retrial
By Jake Viswanath
'The Crown' Season 6 Has Suspended Filming "Out Of Respect" For The Queen's Death
By Bustle Staff
Get Even More From Bustle — Sign Up For The Newsletter
From hair trends to relationship advice, our daily newsletter has everything you need to sound like a person who’s on TikTok, even if you aren’t.