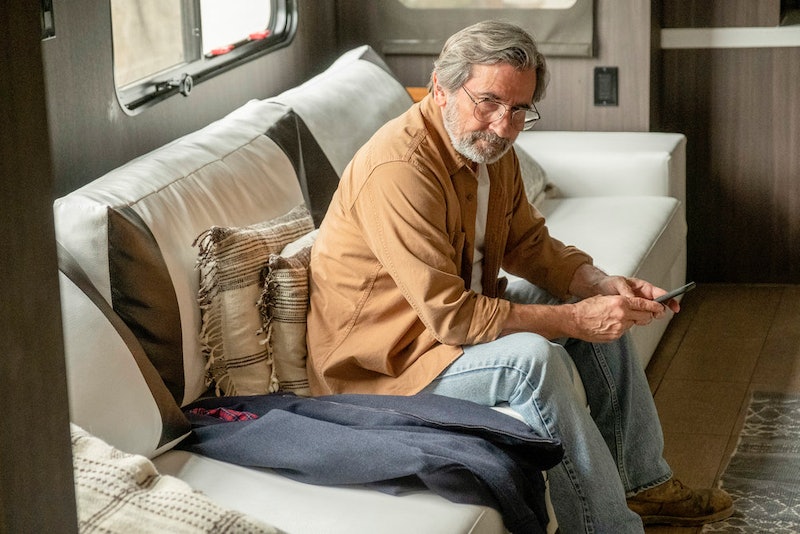 Warning: This Is Us Season 4 finale spoilers ahead! This Is Us answered a lot of lingering questions in its fourth season finale. But it also introduced a whole new set of mysteries — like Nicky's wedding ring in the This Is Us flash-forward.

The flash-forward shows Nicky standing by Rebecca's bedside at least 10 years into the future. The Pearson family is coming together to be there for their beloved matriarch — and perhaps even to say goodbye. Nicky was featured in this scene before, during the Season 3 finale, though many fans found it somewhat odd to see Nicky so prominently by Rebecca's side, considering the two aren't exactly close. Granted, a lot can change over the course of a decade, but it was enough to raise some suspicions, particularly because Rebecca's husband, Miguel, is completely MIA during these moments.

Now, the additional detail of Nicky's wedding ring has reignited old theories and introduced a number of new ones — including one that would involve a pretty heartbreaking lie.

It seems strange that Rebecca would get married for a third time, given that she seems pretty happy with Miguel in the present day. But what if Miguel dies or they have some sort of falling out while she's participating in the clinical trial? It's possible she turns to Nicky for comfort and they end up sharing a romantic connection.

Nicky Is Pretending To Be Jack

We know that Rebecca is starting to exhibit signs of having Alzheimer's in the present day. If her condition worsens over time, she could start getting confused about who people are. One theory that's been kicking around since November predicts that future Rebecca believes Nicky is actually Jack, which would explain why Nicky is by her bedside and why he's wearing a wedding ring in this latest flash-forward.

Her memory loss could have made her forget all about the fire and the fact that Jack died many, many years ago. Nicky may just be playing along with the charade in order to bring Rebecca some comfort during her final days. It's a heartbreaking theory, but one that's definitely well within This Is Us' wheelhouse.

Nicky Is Married To Someone Else

Then again, maybe Nicky simply got married and it has absolutely nothing to do with the Pearson family. He doesn't really seem like the kind of guy who wants to get married at this point in his life, but that's what would make his ring it the perfect red herring.

More like this
'The Queen’s Gambit' Season 2 Tweet Wasn’t From Anya Taylor-Joy
By Mary Kate McGrath, Jack Irvin and Grace Wehniainen
Netflix Shut Down 'Bridgerton' S3 Rumours About A “Very Dark” Storyline
By Bustle
'Happy Valley' Recreated This Moment From S1 In Its Penultimate Episode
By Sophie McEvoy
9 Time Catherine Cawood Was An Absolute Badass In Happy Valley
By Sophie McEvoy
Get Even More From Bustle — Sign Up For The Newsletter
From hair trends to relationship advice, our daily newsletter has everything you need to sound like a person who’s on TikTok, even if you aren’t.

This article was originally published on March 25, 2020