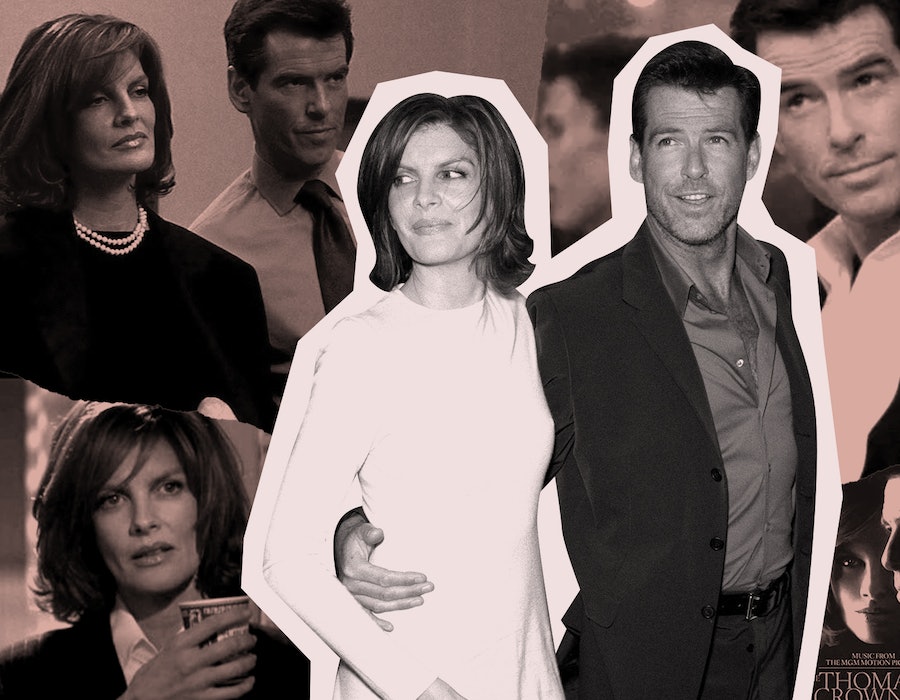 Last week, for the first time, and at my boyfriend’s suggestion, I watched the extremely late-90’s movie The Thomas Crown Affair starring Pierce Brosnan and Rene Russo. If you haven’t had the pleasure, then I’m afraid that me describing the movie as “extremely late-90’s” doesn’t quite do it justice. Turtlenecks abound. The lipsticks are in shades of brown. The sunglasses are Matrix-oval. Rene Russo’s hair is a quintessential Rachel.

The actual plot of the movie (a remake of a 1968 Steve McQueen version) is almost incidental to the film’s transcend vibes, which play out to the sounds of a bwong-y synthetic score that oscillates between Law and Order bass and what they no doubt intended as very sexual saxophone. Nevertheless, the basic gist is that Pierce Brosnan is a rich guy who likes to steal paintings for fun, and Rene Russo is an insurance inspector trying to catch him and recapture the painting he stole. Hijinks abound. Twists and turns appear en masse. All in all, the movie is a fairly straightforward romance-thriller with plenty of beauty shots of the Metropolitan Museum of Art and also a longer-than-normal and brightly lit middle-of-movie sex scene.

If you’re asking why I’m writing about a fairly middling movie 22 years after its release, that sex scene might be a good guess, because it’s hilarious and needs to be discussed at length on this modern iteration of the Internet. (At one point, Rene Russo pours a bottle of Fiji water over Pierce Brosnan!? And that’s sexy? Did she buy the Fiji water at the airport and bring it with her to his house? Did he have Fiji water in his fridge?)

But I am not here to discuss Fiji water, or the choice to have sex horizontal, in missionary position, on a cold marble staircase so that the stars would be jutting into your back at three different discrete points.

Instead I want to talk about the film’s resolution, in which, through a Magritte-related hijinks, Pierce Brosnan is able to return one stolen painting to the Met and steal a different painting at the same time in the hopes that it will convince Rene Russo to leave her job and life and join him on Criminal Island forever. It does, and they get on a plane, Rene Russo full-on straddles him in his first-class seat, and even though the flight attendant is like, “Excuse me, ma’am,” at first, when she sees how horny the two of them are, she just smiles and decides it’s okay for them to dry hump on a plane.

The strangest part of that whole resolution is they try to give it a populist spin.

But that’s not even the weird part of the end of the movie. The insane part, that I haven’t been able to get out of my head since I saw it, is that after the heist, when Rene Russo is contemplating running away with the love of her life when she knows he’s a criminal who literally just stole another painting, the cop who had been on the case for the entire movie tells her that actually he decided he doesn’t really care about this crime. It’s fine, the cop (played by Denis Leary) says. You know what? It’s not a big deal he stole some art. Art? What’s art, just smears of oil on a canvas that rich people like. I’m gonna get back to paying attention to real crimes.

This is a new addition to the remake that didn’t come from the 1968 original because it is, and I repeat, absolutely insane. The resolution of this heist movie is a police officer saying that actually the crime is fine and he’s not going to try to arrest the guy who did it. This man stole multiple millions of dollars-worth of art from the Met but because Denis Leary doesn’t really see what the fuss around that Monet guy is about, it’s actually all good.

Sir, you are a police officer! You’re not supposed to get to decide willy-nilly which laws you’re choosing to enforce based on how severe of a crime you personally think they are. To most people, someone stealing million-dollar pieces of art would be a big fucking deal. But apparently not if your crime is also whimsical.

If you can afford Fiji water for your sex-games, then the laws don’t apply to you.

I think inadvertently The Thomas Crown Affair (1999) is the most honest depiction of city policing in cinema. Whereas most films glorify cops or at least attempt to paint them as foot-soldiers of an inherently noble system, The Thomas Crown Affair accidentally cuts right through the bullshit: Thomas Crown is rich and handsome and connected. So what if he stole some art? Why try to punish him for that when I can lock up poor people for marijuana possession and turnstile jumping.

The strangest part of that whole resolution is they try to give it a populist spin. Denis Leary’s character says that he doesn’t really care about catching Thomas Crown because “art is for rich people,” the implication being that art is like boat shoes or cognac, and that robbing the Met is the equivalent of pulling off a massive opera-glasses heist. But here’s the thing: the Met is not a private gallery — it’s a place where all people, for a suggested donation (or free) get to experience some of the most beautiful artwork in the world, and it’s wild to even imply that the only people who are smart or sophisticated enough to “appreciate” art are the wealthy.

But cops, like most everyone with inherent biases, are classist! They do believe that white, wealthy, attractive people, like Pierce Brosnan, deserve the leeway to use federal crimes for their, in this case, foreplay purposes.

The Thomas Crown Affair sends the message loud and clear: according to Denis Leary and his character’s terrible bangs, if you can afford Fiji water for your sex-games, then the laws don’t apply to you.

More like this
Sandra Bullock’s Razzies Speech Proves She’s The Ultimate Miss Congeniality
By Sam Ramsden
Anne Hathaway Shared A "Thrilling" 'Princess Diaries 3' Update
By Darshita Goyal
The Banned 'Friends' Ad Shows Monica As You’ve Never Seen Her Before
By Sam Ramsden
Twitter Is Having A Field Day Over Mr Blobby’s Costume Selling For £62k
By Catharina Cheung
Get Even More From Bustle — Sign Up For The Newsletter
From hair trends to relationship advice, our daily newsletter has everything you need to sound like a person who’s on TikTok, even if you aren’t.