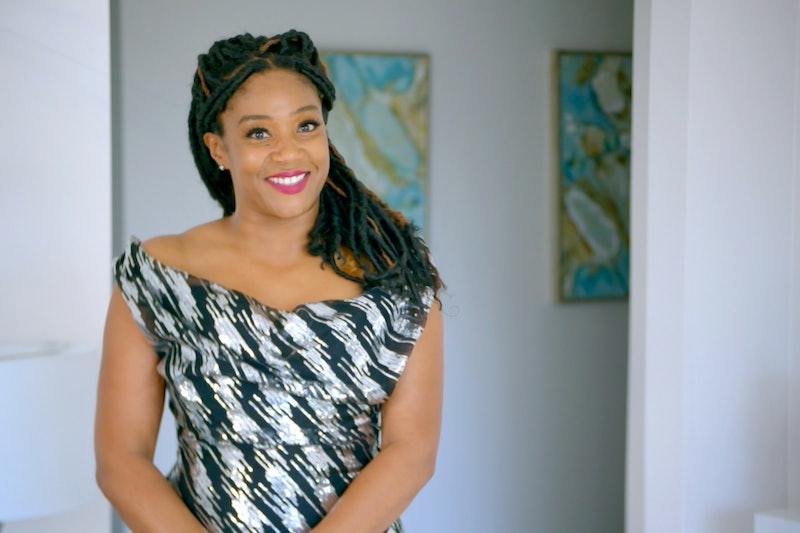 Tiffany Haddish knows how to host a good party — but not how to distract when something goes wrong, apparently. Following Super Bowl LV on Sunday, Feb. 7, Haddish hosted Verizon's Big Concert for Small Business, which featured performances from Miley Cyrus, Christina Aguilera, Luke Bryan, and more. However, the true highlight of the show was Haddish's hosting, which saw her going very off-script, much to the horror of producers.

While introducing R&B singer H.E.R., who had just performed "America the Beautiful" at the Super Bowl, Haddish suddenly paused and looked confused before delivering the line of the night: "What the f*ck does 'vamp' mean, yo?" Apparently, producers had told her to "vamp," meaning stall for time, while they were dealing with technical difficulties. "I don't know what vamp means," she continued. "To me, vamp means be a vampire or 'vamperate' like slowly disappear and/or elaborate? Maybe that's the word they should have used. Elaborate."

After introducing H.E.R. again, the producer needed even more time and told her to keep it "cool." "Y'all gotta communicate with me in proper English," she said, addressing the producers while live on the air. Then she addressed the virtual audience. "They in my ear, I'm gonna keep it 100 with y'all. They told me to be more cool. What the f*ck does that mean? I'm the coolest!" I mean, she didn't lie.

Later on, Haddish explained that she was simply prepared to host the event, not to give a full comedy set to cover for technical mishaps. "What they just told me in my ear is, that I'm about to do a 15-minute standup set that I'm not prepared for," she said. "I was nowhere in the realm of thinking I was doing a 15-minute set. I'm here to host." However, that didn't stop viewers from laughing anyways, with some thinking the snafu was just as funny as her planned jokes.

Hopefully, she at least got paid for this gig. Back in November, Haddish revealed that she declined to host the Grammys pre-telecast ceremony, an offer she was excited to receive, because there would be no compensation — not even for wardrobe or transportation. "As much as I appreciate the honor of being nominated, that's not okay," she told Variety. "All of that would have to come out of my pocket. I don't know if this might mean I might not get nominated ever again, but I think it's disrespectful."

Luckily, there seems to be no harsh feelings on Haddish's side after the Super Bowl mishap. "I just want to say that was one of the funnest hardest things I have ever done," she said on Twitter following the event. "Thank you @Verizon for letting me be apart of something so great."

More like this
Confusion Reigns After Kanye Changes His Instagram Profile Pic To Kris Jenner
By Jake Viswanath
The Try Guys Cheating Scandal, Explained
By Grace Wehniainen
The Real Reason Russell Brand Decided To Quit YouTube
By Sam Ramsden
Dixie D’Amelio & Noah Beck “Love Each Other” Despite Breakup Rumors
By Julia Emmanuele, Jordyn Tilchen and Grace Wehniainen
Get Even More From Bustle — Sign Up For The Newsletter