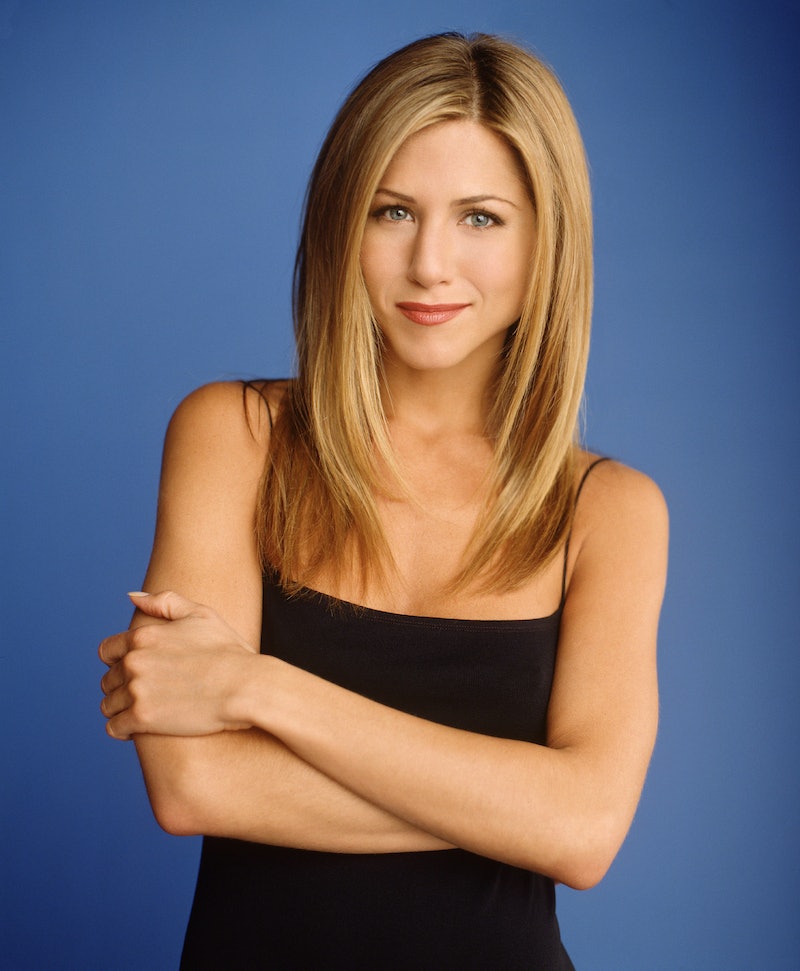 For everything you love, there's a TikTok out there to ruin it. Jennifer Aniston became a household name with her iconic role of Rachel Green on NBC's Friends, a sitcom so beloved it's remained a hot topic to this day. Ahead of the forthcoming Friends reunion in the works at HBO Max, one TikTok user pointed out a specific aspect of Aniston's portrayal of Green that isn't her memorable charm, chic style, or signature hairdo — but rather a recurring vocal habit.

It all started with TikTok user @sheherzog, who posted a video calling for responses to the prompt: "What is a trope in media that once you saw it, you couldn't unsee it?" Another TikToker by the username @cts.trphe replied to the video, saying, "Okay, so technically this isn't a trope, but what I'm about to say is going to ruin your life. It's gonna ruin your life — especially if you are a big fan of the show Friends."

They continued, "If you are a big fan of the show, I’m begging you, scroll away because I’m going to ruin your life.” Considering the video has garnered over 177k likes, fans kept watching, and who can blame them? The sitcom and its 236 episodes were so long available to stream in full on Netflix before recently moving to HBO Max, and it's nearly impossible to point out an unknown fact about it in 2021.

“Jennifer Aniston has this vocal tic that she does at the beginning of every single sentence that she starts on any show that she’s in," said the TikTok user. "It’s very specific, and it’s very hard to unsee once you notice it.” He then played a supercut of Aniston seemingly clearing her throat before speaking more than ten times throughout various Friends' episodes, and he was right. It's the only thing a lot of people can think about now.

Fans in the comments almost unanimously agreed, with one writing, "Big fans of Friends already know this. NEXT!" Another commented, "Yes! She does this so much. A lot of people have crutches when acting when they don't know what else to do. A lot of people sigh, or grunt, etc."

Some fans, however, took this as a dig at Aniston and jumped to her defense. "Bruh she's... acting. She does it when the character/situations are awkward," wrote one user. "Lol what? It's part of the character, and also she doesn't do it literally before every sentence, this is lame," read another comment.

At the end of the day, these instances of Aniston's apparent throat-clearing likely won't stop devoted fans from continuing their comfort rewatches. After all, Aniston is a top-tier actor, and Friends is a classic for a reason.

More like this
A New 'And Just Like That' Table Read Pic Confirms A Key Character's Return
By Jack Irvin and Grace Wehniainen
Netflix Reveals First Look At Wednesday In The 'Addams Family' Spinoff Series
By Bustle Editors
A New Scooby-Doo Movie Confirmed Velma Is Gay & Twitter Is Pumped
By Radhika Menon
24 Years Ago, 'Friends' Dropped Its Most Underrated Ross & Rachel Episode
By Grace Wehniainen
Get Even More From Bustle — Sign Up For The Newsletter