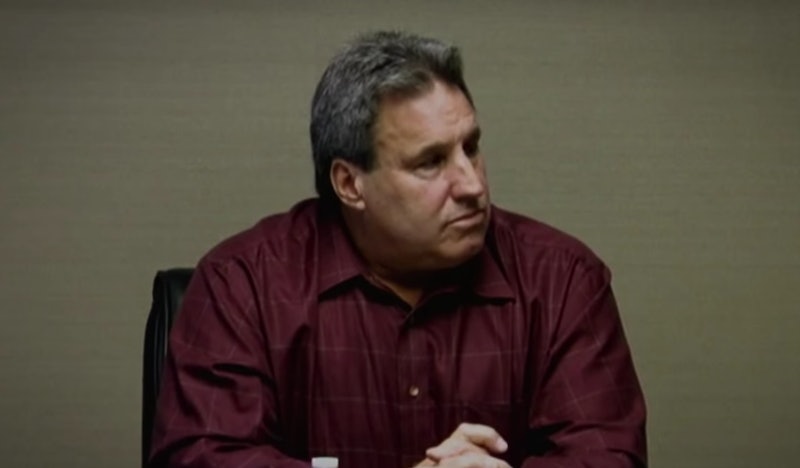 A month after Netflix's Unsolved Mysteries delved into the 2010 death of JoAnn Romain, her estranged cousin Tim Matouk is sharing his side of the story in a new interview with creator Terry Dunn Meurer. Though the former police officer initially declined to be interviewed for the show, he changed his mind after seeing the series, which includes claims from some of Romain's family members that Matouk was involved in her death. The case was ruled a suicide, and Matouk has never been charged in connection to the case. He vehemently denied the accusations in his interview with Meurer.

"I was shocked," Matouk said of learning that people like Romain's daughter Michelle considered him a suspect. "Why point fingers at family members when you don't have any evidence, you don't have any motive? To me it was, like, just crazy. It was absurd that they would do that or say that," he said. He added that he didn't know where Romain was going to be the night she allegedly walked into a frigid lake and drowned. He said he also didn't know what kind of car she drove and that he had no motive to want to harm her. "There was no hostility. We were never mad at each other. We never had an argument over anything," Matouk said.

Michelle claimed in 2018 that her mother lived in fear of Matouk. But he said it was news to him that Romain even considered him estranged. He explained that while he and Romain were close when they were younger, they lost touch a bit as they grew up. He also asserted that he hasn't maintained any negative feelings towards his cousin, despite Michelle claiming in the show that he and Romain fought on the phone weeks before her death. Instead, he says he called to ask why Romain had been saying that her brother John's problems were all due to Matouk. "For her to say that about me was, I thought, way out of line," Matouk said. "So I figured it was OK to give her a call. We weren’t mad at each other, so why in the world wouldn’t I be able to call her and ask her?"

He said that Romain called him a "troublemaker" during the call and hung up on him, but Matouk claimed there was "no screaming or yelling." When Romain was found dead a few weeks later, he believed that the police were correct in stating that it was not a homicide. "Whether she slipped and fell in when she got down there [to the lake], whether she went in intentionally, who knows?" Matouk said. He added that whatever happened that night, he has what he believes to be an airtight alibi.

"I was working that night. I was working for a Michigan state police narcotics task force," he said. "That particular night, we were working an active target in the city of Warren. Now, when I say active, that means you're sitting on a location and you can't leave that location because there's activity going on, so you're in constant communication with your partners … you gotta ask permission to leave to go to the bathroom — you just can't wander off on your own."

Matouk added that police testimony and cell phone records corroborate his alibi and that there is no motive or evidence against him. "I never would have wanted to hurt Joann," he said.

More like this
Where Is The Bling Ring’s Rachel Lee Now?
By Arya Roshanian
Lori Vallow’s Son Was Arrested For Sexual Assault Days Before 'Sins Of Our Mother' Premiered
By Brad Witter
Lori Vallow Faces The Death Penalty For Allegedly Murdering 2 Of Her Children
By Brad Witter
Shaina Explains Why Natalie’s 'Love Is Blind' Text Claims About Shayne Have “No Validity”
By Grace Wehniainen
Get Even More From Bustle — Sign Up For The Newsletter