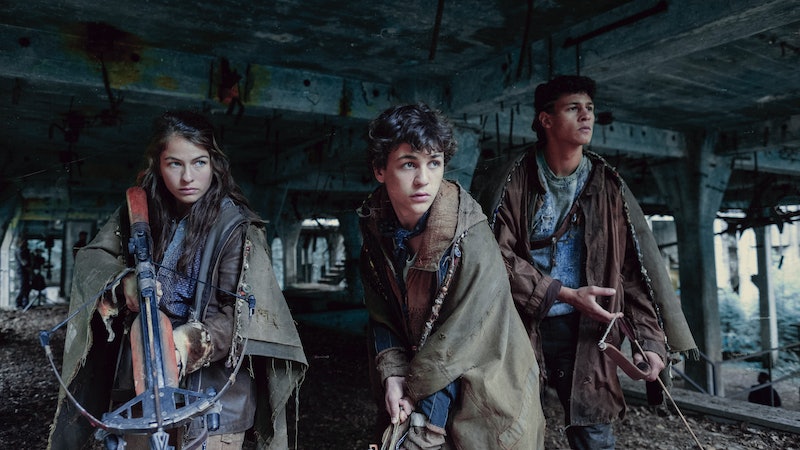 Netflix's Dark was an experience unto itself, jumping between timelines and alternate realities for a satisfyingly mind-bending watch. Though the show ended in 2020, Dark's production company, W&B Television, has created yet another apocalyptic thriller with a scientific mystery at its center for fans to dive into: Netflix's Tribes of Europa.

The show debuts on Feb. 19, and Netflix has yet to announce if Tribes of Europa will return for Season 2. Still, now's the perfect time to check out Season 1, especially if you're missing the adventures of Jonas and Martha. Tribes of Europa and Dark share a similar grungy aesthetic, and both revolve around young adults taking on the monumental task of trying to save the world.

Set in 2074, Tribes of Europa takes place after a global disaster turns Europe into a post-apocalyptic wasteland full of warring factions. There's the Crimson Republic, which houses the army and attempts to uphold their old civilization; the brutal Crows, who want to dominate the other tribes; the Atlantians, the mysterious and technologically advanced tribe who live in a hidden base; and the Origines, a pacifistic and nature-dwelling tribe that refuses to use technology because they believe that's what originally caused civilization's downfall.

The story follows three siblings from the Origine tribe — Kiano (Emilio Sakraya), Liv (Henriette Confurius) and Elja (David Ali Rashed) — who are split up after an Atlantian pilot crashes near the Origines village and the Crows attack. Kiano is taken prisoner by the Crows, while Liv ends up with the Crimson Republic. Meanwhile, the pilot secretly gives Elja a mysterious cube, and asks him to return it to the Atlantians, as it contains records that could decide the fate of humanity.

According to the show's production notes, creator Philip Koch was inspired to create Tribes of Europa in 2016, after voters in the U.K. voted to leave the European Union. In Koch's shock following the Brexit decision, he imagined a post-apocalyptic scenario where Europe had been fractured into individual tribes that couldn't see eye to eye.

Though the story sounds depressing, Koch said that the ongoing pandemic actually helped lighten the overall tone of the show. "When I originally developed the story, the apocalyptic mood was more pronounced," he said. "But as we now feel as if we were experiencing the real apocalypse, we elaborated the topic 'new beginning' more strongly. The series has become more positive and, at the same time, more epic.”

More like this
Devi Is Going To Meet A “Smoldering Bad Boy” In ‘Never Have I Ever’ Season 4
By Jack Irvin and Gabrielle Bondi
Netflix Reveals First Look At Wednesday In The 'Addams Family' Spinoff Series
By Bustle Editors
‘The Ultimatum: Queer Love’ Is Officially On The Way
By Radhika Menon and Kadin Burnett
'Heartstopper' S2 Just Welcomed Four Brand New Cast Members
By Nola Ojomu and Sam Ramsden
Get Even More From Bustle — Sign Up For The Newsletter