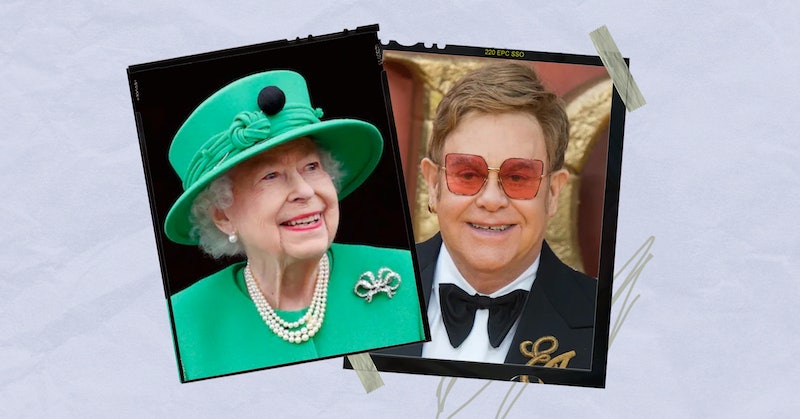 Buckingham Palace confirmed the death of Queen Elizabeth II on Sept. 8. At 96 years old, she was the world’s oldest reigning head of state and Britain’s longest-reigning monarch. In the wake of the royal announcement, family friend Sir Elton John and celebrities such as Jennifer Garner have been paying tribute to Queen Elizabeth II on social media alongside members of the Royal Family, including the newly crowned King Charles III.

Previously, The Palace released a statement on Sept. 8, announcing that the British monarch was “under medical supervision” following health concerns from her doctors. Prince Charles, Princess Anne, Prince William, the Duke of Sussex, and other members of the royal family, traveled to Balmoral Castle to be by the Queen’s side.

READ NEXT: 12 Photos Of Celebs Meeting The Queen

The United Kingdom will now enter 12 days of national mourning. Before Her Majesty’s funeral eventually takes place, the Queen’s body will lie in state in Westminster Hall, where members of the public will be able to pay their respects.

Here’s how celebrities from around the world reacted to the Queen’s passing.

The “Rocketman” singer has been a close friend of the Royal Family, including the late Princess Diana, for decades. “Queen Elizabeth has been a huge apart of my life from childhood to this day, and I will miss her dearly,” he concluded his tribute on Twitter.

Sir David Attenborough, a contemporary of the Queen and British national treasure, paid tribute via the BBC.

"The Queen had an extraordinary ability to put you at your ease. If there was a technical hitch she wanted to know what it was and, if it had a funny side, she was quick to see the joke. Yet, not for one second could you forget that you were in the presence of someone who had willingly accepted enormous responsibilities and dedicated her life to serving the nation. That you were, in short, in the presence of royalty. The whole nation is bereaved."

Garner took to Instagram to pay tribute to The Queen, calling her “an elegant, incredible woman.”

Dame Helen Mirren portrayed Queen Elizabeth II in the 2006 biopic The Queen, winning her the Oscar for Best Actress. “I am proud to be an Elizabethan,” she wrote in her Instagram tribute.

The James Bond actor, who famously starred in a 2012 Olympics Opening Ceremony skit with the Queen as 007, gave a statement to PA news agency after her passing. “I, like so many, was deeply saddened by the news today and my thoughts are with the royal family, those she loved and all those who loved her,” Craig said. “She leaves an incomparable legacy and will be profoundly missed.”

Another James Bond actor, Pierce Brosnan, shared a picture of Queen Elizabeth II on Instagram.“Rest In Peace Your Majesty. It was an honor to serve you,” he captioned the image.

The “Levitating” singer paid tribute to the monarch with a simple black-and-white portrait on her Instagram Story.

Victoria, who received the OBE distinction from Queen Elizabeth II in 2017, paid tribute to Her Majesty The Queen on Instagram.

The supermodel was named as a Global Ambassador for the Queen’s Commonwealth Trust in September 2021 ahead of Her Majesty’s Platinum Jubilee year.

The Rolling Stones frontman recollected his most fond childhood memories of Her Majesty The Queen on Instagram.

Kardashian shared a viral tweet about the rainbows that appeared above Queen Elizabeth II’s palaces across the UK on her Instagram Story, as well as a portrait of Her Majesty.

To celebrate the Queen’s legacy, Morris recorded an acoustic cover of Patty Griffin’s “Up to the Mountain” in Her Majesty’s honor.

Jenner, the matriarch of the Kardashian family, sent her “love and condolences” to the Royal Family on Twitter.

Lil Nas X typically tweets with an Internet sense of humor, so he likely means no offense with his reaction to the Queen’s death.

The Watch What Happens Live host paid tribute to Queen Elizabeth II with a simple portrait on Instagram.

The legendary singer recalled when she sang for Queen Elizabeth II in her Twitter tribute to Her Majesty.

The British Real Housewives of Beverly Hills star sent her condolences to the Royal Family. “Her reign was exemplary as she saw our nation through so many crises,” she wrote in a Twitter note.

The British singer reposted a headline announcing The Queen’s death, adding her own dove emojis to remember Her Majesty.

The President and the First Lady of the United States wrote a joint letter to remember the Queen. “Her Majesty Queen Elizabeth II was more than a monarch,” they began. “She defined an era.”

The Editor-in-Chief of British Vogue shared the Platinum Jubilee Vogue cover from earlier this year with a sweet message calling the Queen a “constant figure” and an “inspiration.”

The Bridgerton star shared a video montage of the Queen from her younger years, captioned with the Queen’s own comments, “Our purpose here is to observe, to learn, to grow, to love and then we return home.”

TV presenter Alison Hammond kept it short and sweet with her tribute to the Queen, simply sharing an image of the Queen smiling with “RIP Your Majesty.”

The author of the Noughts & Crosses series of books, Malorie Blackman, shared her tribute on Twitter, comparing the actions of the Queen and the UK Government.

The GBBO winner and TV chef shared an image of a young Queen at her coronation with the simple caption, “Rest In Peace.”

As her tribute to the Queen, the actor shared her stylist Rebecca Corbin-Murray’s Instagram post in her Stories which included a quote from the Archbishop of Canterbury, Justin Welby.

Shortly after being crowned, King Charles III paid tribute to his mother, calling her passing “a moment of the greatest sadness” for his family.