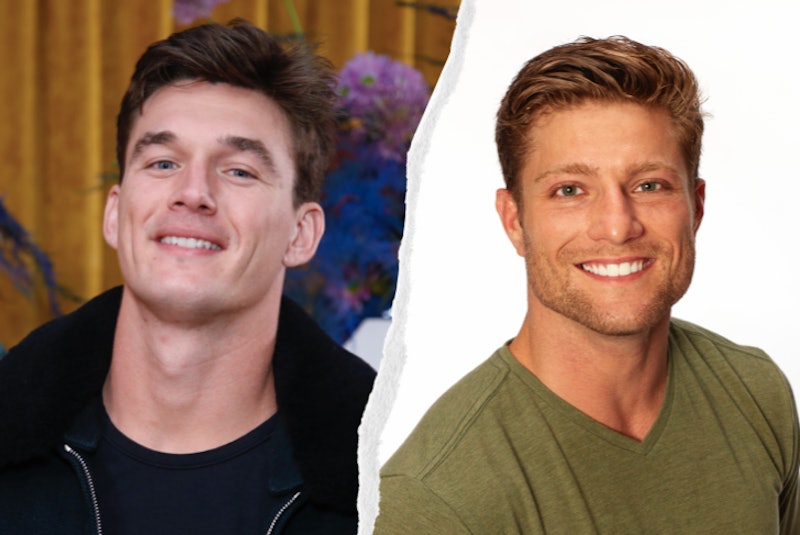 Hannah Brown and Clare Crawley may not have a ton in common as Bachelorettes, but there is one thing they both share: a contestant named Tyler C. So naturally, it didn't take long for one Tyler to address the other. During Monday night's premiere, Tyler Cameron reacted to The Bachelorette's new Tyler C. on Twitter, which immediately garnered the attention of Bachelor Nation. Bustle reached out to Tyler Cameron for further comment on his namesake, but did not receive an immediate response.

Unlike the Tyler C. from Hannah's season ,who made it all the way to finale night as her runner-up, Clare's Tyler C. found himself eliminated during the first rose ceremony after unwisely inserting himself into drama involving his fellow contestant Yosef. He accused Yosef of messaging women on Instagram during quarantine as he waited for Clare's season to begin, and ended up being sent packing. However, unlike most Night 1 casualties, his 30 seconds of fame is continuing for a little while longer, thanks to Bachelor Nation's obsession with the original Tyler C., Tyler Cameron.

During her live tweet session for @BabeTweets, Entertainment Tonight's Lauren Zima acknowledged the Tyler-sized elephant in the room. "Honestly the bravery of a man to come on this season of #TheBachelorette and be named 'Tyler C'," she tweeted, tagging Cameron in the post. And it didn't take long for the Florida native to weigh in on the matter by responding, "Was there even two Tyler's?" Well played, sir.

To answer his question, yes there was in fact another Tyler among Clare's 31 contestants. But unlike her Tyler C., the other Tyler aka Tyler S. was given the opportunity to stay and presented with a rose at the end of the episode, to which he happily accepted. May he now drop the "S," and be known as Tyler for the remainder of his Bachelorette journey.

Cameron wasn't the only one to comment on Tyler C. 2.0. Fellow Bachelorette alums Jason Tartick and Dylan Barbour both commented on their Instagram Stories, with Tartick calling this new Tyler C. "a fraud."

Meanwhile, Barbour, who competed for Hannah Brown's heart with Cameron last year, took a jab at his friend, remarking on the similar attributes they seem to have. "Classic Tyler c move fresh out the limo SNITCHIN," he wrote.

Clearly there's only room in this franchise for one Tyler C. and that position has already been filled. Sorry dude, but Bachelor Nation has spoken.

More like this
Hannah Ann Got Engaged 3 Years After 'The Bachelor' & The Proposal Was Dreamy
By Grace Wehniainen
10 Photos Of The Wildest Limo Arrivals From 'The Bachelor' Premiere
By Brad Witter
Zach Reveals The Chaotic 30 Minutes That Were Cut From ‘The Bachelor’ Premiere
By Grace Wehniainen
Bachelor Zach’s “Dream Job” Has Nothing To Do With His Work In The Tech Industry
By Brad Witter
Get Even More From Bustle — Sign Up For The Newsletter
From hair trends to relationship advice, our daily newsletter has everything you need to sound like a person who’s on TikTok, even if you aren’t.