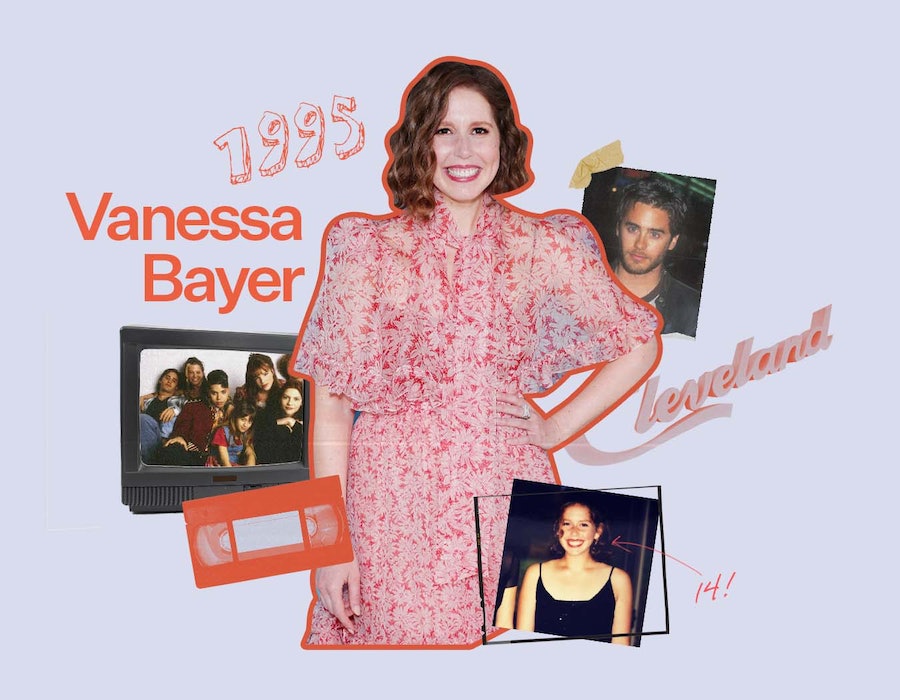 Like many eighth graders, 14-year-old Vanessa Bayer had no idea what she wanted to be when she grew up. She did, however, know what she didn’t want to be: an athlete. “I definitely was realizing that even though I was tall, I was not good at sports,” the actor and comedian, 40, tells Bustle. With her days as the first pick in gym class numbered, she turned to other pursuits. A career quiz revealed she could make a great newscaster, something she briefly considered. She joined the French club, though she admits that the real appeal was the food they served.

Today, she’s best known for her Emmy-nominated seven-year run on Saturday Night Live and a raft of comedic roles in film and TV, but Bayer, as a teen, was admittedly far from the class clown. “I think I was known for being nice,” she says. “No one really knew me as being funny until I was in college.”

Bayer would find humor, ironically, through trauma. At 15, she was diagnosed with leukemia, which she battled through high school. Joking about it with her family became a vital way of finding levity in an otherwise dark time. “It’s scary when someone gets sick or is going through any kind of trauma. A lot of times people will be like, ‘Are they different now?’ even though they’re not,” Bayer says. “So I think humor is a great way to remind people you’re the same. It felt like that not being off-limits [to joke about] made it so we could talk about it. It really is probably one of the reasons that I went into comedy as a career, because it was such a healing, unique language that I could [use to] talk to my friends and family.”

Now, Bayer is using that language to talk about cancer again, this time in her loosely autobiographical Showtime series, I Love That for You. The show follows Joanna (Bayer), a childhood cancer survivor and home shopping network host whose ill-advised lie about her cancer returning spirals out of control, becoming an unexpected boon for her career when viewers respond to her heartrending cancer stories. It’s an exaggerated exploration of Bayer’s own use of humor as a coping mechanism and unabashed love of attention — even when it came from doctors and nurses in treatment. If her 14-year-old self could see it now, she’d probably laugh, too.

Below, Bayer talks watching scary movies at sleepovers, mining bar mitzvah season for her most memorable SNL character, and her QVC obsession.

Take me back to 1995, when you were 14. Where were you living, and how were you feeling about yourself and your life?

Did you have a favorite subject in school?

I always liked French class. I started taking French when I was in fifth grade. In fact, I was a double major in college of communications and French. In French class, it just felt like every week we were bringing in food.

Were you just eating a lot of cheese? My French class was not like this.

A lot of my French teachers just really liked food. So they would be like, “Extra credit. Everyone make like a galette.” I think I was even in French club for a while, because the eating there was even better!

Do you still remember any French, or are you out of practice?

Yes, I speak it. I mean, I wish I spoke it better. I can kind of understand it, and I can kind of speak it. But it’s not nearly as good as it was when I was in my French classes, eating cake.

A couple of your very memorable SNL characters are adolescents, like Jacob the Bar Mitzvah Boy and the child actor Laura Parsons. What do you like about playing characters at that awkward age? Did you draw on any of your own experiences from age 14?

Kids are just so funny. And particularly the Bar Mitzvah Boy was, for me, inspired by when I was in seventh grade. When I was 13, we would have bar mitzvahs every weekend, and the boys were just so funny, because they were maturing at a slower rate than the girls. But they would have to be on stage being really formal, and they would never know particularly what to do with their hands. A lot of kids aren’t natural performers — they don’t want to be. That’s scary for them, to be doing any kind of public speaking. I just think there’s something really funny about that.

And then the child actor [Laura Parsons] — my school had this after-school theater program called Stagecrafters, which was actually really popular. The way that I have my character Laura Parsons talk is how everyone acted [there]. I don’t think we had Laura Parsons sing, but the other thing that I always thought was so funny was whenever people in Stagecrafters would sing, they would all have a British accent suddenly. There’s just these things that kids do.

So a lot of that was inspired by my after-school theater program, and then just going to bar mitzvahs all the time. Once I started doing the Bar Mitzvah Boy on SNL, a lot of people who are friends with my brother Jonah were like, “You’re doing an impression of Jonah.” I guess a lot of the gestures and stuff are still my brother’s gestures. He still hasn’t quite grown out of it.

I’m sure he’d be thrilled to hear that. Did you have a bat mitzvah?

Oh, he’s aware. I did. My brother had a traditional bar mitzvah where he had a nice luncheon, where there was a DJ at a big party center. I had the time of my life. I got bat mitzvah’ed in Israel, on Masada, which was really an incredible trip. And then when I got back, I spoke at a Friday night service. And then I had a WhirlyBall party for kids. I kind of wanted a more formal party, where I could wear a dress. It was not the most glamorous party, but I think it was very fun.

Your character on I Love That for You grows up idolizing a host on a home shopping network. What did you watch when you were 14, and who did you idolize?

When I was younger, I used to watch a lot of home shopping, and I loved those two hosts, Jane Treacy and Mary Beth Roe on QVC. I watched My So-Called Life for sure. I loved Party of Five, I watched Melrose Place. Obviously Saved by the Bell.

My friends and I would have sleepover parties where we would stay up and watch SNL. We would also have these sleepover parties where we would watch the only scary movie [we had] ... this movie called April Fool’s Day, which was this really old scary movie. But I don’t know why we watched it all the time. And then, so that we wouldn't be scared going to sleep after that, we would watch The Incredible Mr. Limpet. And that would be the movie that we would all fall asleep [to]. It’s such a weird, specific thing.

It’s probably because someone had the VHS. You had to watch whatever videos someone had in their house, right?

You’re absolutely right. We would watch Empire Records all the time. I think a bunch of us had that.

Did you have a celebrity crush at 14?

Well, yes. I loved Jared Leto from My So-Called Life. And Scott Wolf from Party of Five.

We’re talking about age 14, but I know that your leukemia diagnosis was at 15. Cancer factors heavily into your show, with your character lying about her illness returning. Looking back at your own experience with cancer as a teenager, why did you want to use it as a tool for situational comedy in a show?

It was obviously an incredibly difficult time in my life. Even though I was a little shyer when I was 14-ish, I always really loved attention. And so, if someone already loves attention, and then something happens to them — like they get leukemia — they get even more attention. That’s something that I really wanted to explore in this show, is the idea that I got all this special treatment when I got leukemia. I would come in late to school all the time, and the attendance woman would be like, “Go ahead.” And I was late because I was a teenager — I was watching TV or sleeping in.

I also think there was something really healing about joking around about it. It reminded my friends that I was still the same Vanessa, that things hadn’t changed just because I was sick.

How did you and your family joke about it?

Well, we called it dropping the L-bomb, whenever we would get any kind perk from [me having leukemia]. Like, after my dad didn’t get this speeding ticket, he came home and said, “I dropped the L-bomb!” I would joke with my friends, and this isn’t a great joke, but I’d be like, “You guys think you’re so cool because your hair is real.” Because I was always wearing a wig.

You’ve been through so much. What would your 14-year-old self think of you now, and is there any advice you would give her?

That question really makes me cry. Just thinking about doing interviews this morning with [my co-stars] Molly Shannon and Jennifer Lewis, and just getting to work with those women, and just getting to do this show that's inspired by my life.... I think 14-year-old me would be very happy.

More like this
Austin Butler Confirms Vanessa Hudgens Pushed Him To Do 'Elvis'
By Alyssa Lapid
15 Photos Of 'The Last Of Us' Star Pedro Pascal That Cement His Zaddy Status
By Radhika Menon
Who Is Pete Davidson Dating? He & Chase Sui Wonders Got Caught Kissing
By Jake Viswanath
We Finally Have Some Answers To How Heather Gay Got A Black Eye On 'RHOSLC'
By Samantha Rollins
Get Even More From Bustle — Sign Up For The Newsletter
From hair trends to relationship advice, our daily newsletter has everything you need to sound like a person who’s on TikTok, even if you aren’t.