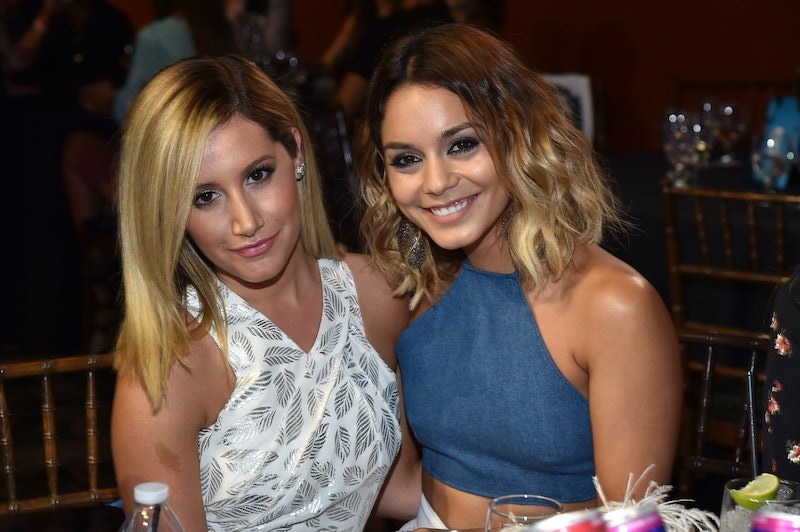 They may have played enemies in the High School Musical franchise, but Vanessa Hudgens and Ashley Tisdale's real-life friendship will last for generations. In a recent interview with Entertainment Tonight, Hudgens said she'll be a "fairy godmother" to Tisdale's baby while sharing her excitement for her best friend's growing family.

Back in September, Tisdale announced that she and husband Christopher French are expecting their first child; a month later, she revealed that she is pregnant with a baby girl. "Oh my gosh, it's so exciting," Hudgens told ET about Tisdale's baby news. "I'm just so excited to get back to L.A. to sing to her baby and her stomach. I am just over the moon for her and Chris. They are just gonna make such incredible parents. I cannot believe it still, but I'm very emotional and very excited about it."

Though the Princess Switch star said that she doesn't know if Tisdale will make her one of the baby's godparents, the actor explained that she plans to play a key role in the little girl's upbringing. "I'll be the fairy godmother at least," she said. After all, once a Wildcat, always a Wildcat — and that honor extends to the offspring of High School Musical alumni.

Hudgens' excitement over Tisdale's baby news isn't surprising, especially because they've gushed over each other and their friendship several times throughout the years. "I'm a loyal person," Hudgens told Women's Health in 2017. "[Ashley is] one of those girlfriends who will be my friend forever."

Two years later, Tisdale opened up about the pair's enduring bond in an interview with Us Weekly, where she revealed that she met Hudgens a year before they began filming High School Musical in 2006. "We actually worked together a year before in a Sears commercial, and from that day on we were super close," Tisdale recounted. The actor also added that many people have assumed the duo first met on the set of the Disney Channel movie, despite that not being the case at all.

"We just have a connection and she's so awesome and one of my best friends," she continued. As for how they've maintained such a strong friendship over the past decade and a half, Tisdale explained, "what I love about her is that she's so talented, and I think what we share is that we're really grounded people and I think that that's important."

Even amid the coronavirus pandemic, Tisdale and Hudgens have found inventive ways to stay close — mainly by dancing to some of their iconic High School Musical songs on TikTok. In March, Tisdale posted a video of herself recreating the choreography from "All In This Together" on the viral video app, which Hudgens later duetted and shared on Instagram. "Well. It's come to this," she captioned the video. Fifteen years, three High School Musical movies, and multiple social media videos later, and it seems like Hudgens and Tisdale's friendship will truly last forever.