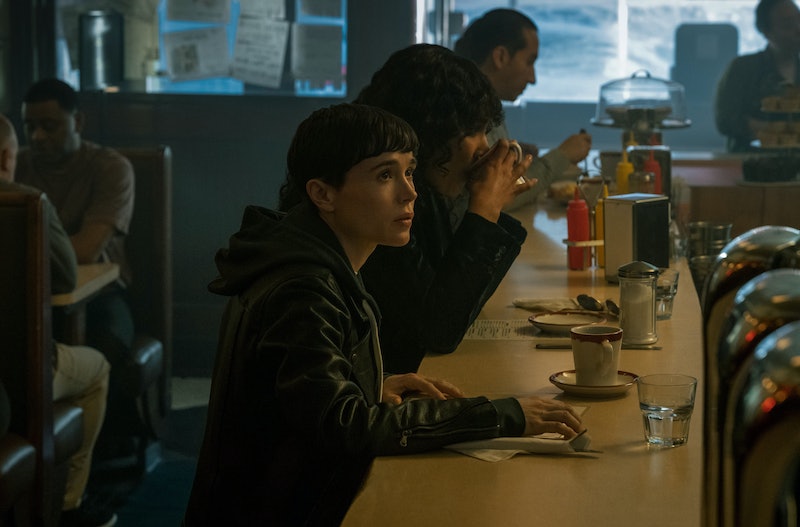 Spoilers ahead for Umbrella Academy Season 3. There’s a lot of transformation that happens in Umbrella Academy Season 3 — and it’s not just because some of the Hargreeves siblings start to get a better handle on their unique powers. While Luther (Tom Hopper) falls in love with Sparrow Academy member Sloane (Genesis Rodriguez) and Diego (David Casteñeda) grapples with newfound fatherhood, the team’s resident sound-and-energy manipulator — and easily the strongest of the bunch — comes to some realizations of his own. Meet Viktor Hargreeves, Elliot Page’s character who comes out as a transgender man in Season 3.

Page himself first came out in December 2020 in a heartfelt message on Twitter. "I love that I am trans,” he wrote. “The more I hold myself close and fully embrace who I am, the more I dream, the more my heart grows and the more I thrive. To all the trans people who deal with harassment, self-loathing, abuse, and the threat of violence every day: I see you, I love you, and I will do everything I can to change this world for the better.”

While there were initially no plans to rewrite Page’s character on Umbrella Academy, his feelings around it changed over time. “At the end of the day, it was Elliot’s decision to bring this transition onto the screen. The season was not written like that months before we started shooting,” Emmy Raver-Lampman, who plays Allison, explains to Bustle. “Then Elliot began his transition, and he had several conversations with [creator] Steve [Blackman], and then they decided to make it a part of the story for Viktor.”

Raver-Lampman adds that the Umbrella Academy cast and crew “really took Elliot's lead” when portraying Viktor’s coming out. “We all just wanted him to feel seen and comfortable, and not asked to do anything that he didn't want to do,” she says. “The only thing that matters is that I believe that Elliot is really happy with how we decided to tell that story, which is his story through Viktor, in a way.”

Viktor’s journey with his identity began in Season 2 when Five (Aidan Gallagher) catapulted the Umbrella Academy into the 1960s, away from the impending apocalypse. Suffering from amnesia, Viktor was taken in by Sissy (Marin Ireland), and the two fell in love. Before Sissy, Viktor’s whole life was defined by physical and mental repression due to Reginald (Colm Feore) drugging him and Allison brainwashing him. And it was only when he was with Sissy that he became more comfortable opening up.

He had to leave Sissy in the past, but her effect on him reverberates into the present. In the second episode of Season 3, Viktor walks down to the Hotel Obsidian lobby sporting a new short haircut. He explains to Five, Diego, and Klaus (Robert Sheehan) that he met with Marcus from the Sparrow Academy, to which Diego says, “Who elected you, Vanya?” Viktor then says, “It’s, uh, Viktor.” When Diego asks who Viktor is, he explains, “I am. It’s who I’ve always been.”

Viktor pauses to stare at his brothers and asks if that’s an issue for anyone. “Nah, I’m good with it,” Diego says. “Yeah, me too. Cool,” Klaus adds. Five, who’s normally a crank, simply says, “Truly happy for you, Viktor,” before launching into why Viktor doesn’t speak on behalf of the family.

Later, Viktor comes out to Allison, and it’s similarly a non-issue. While Allison frets about “not knowing sooner,” Viktor explains to her that even he didn’t even know until recently. “Being with Sissy... opened something in me. Showed me I’d never be free hiding from who I really am,” he says. “After losing her, I realized I just can’t live in that box anymore.”

“You know, I always hated mirrors,” Viktor adds. “I thought everybody felt so strange in their skin. I guess that’s not true, right?” He says now, when he looks in the mirror, he sees “just me.”

Luther, meanwhile, is the last Hargreeves sibling to learn about Viktor, suggesting they should mark the occasion. When Viktor shows up, Diego tells him that “Luther wants to throw you a big stupid party so you feel loved” and asks, “Do you feel loved?”

It’s all very sweet, and a marked contrast to how the siblings usually pelt each other with insults. But they wanted to portray Viktor’s coming out “as easy and un-conflicted as possible,” Casteñeda says. Queer creator Cheryl Dunye directed Episode 2, and Casteñeda says filming Viktor’s coming-out scenes felt “light and easy” compared to the rest of the series. “[Dunye] was like, ‘You don’t understand what this is going to mean to a lot of people. This is a really beautiful moment; take it in. You're part of TV history now, doing something really special,” Casteñeda says.

Ultimately, the cast says there was never any question that Viktor’s siblings would support him. “Love is a strong word for the Hargreeves siblings, but acceptance has never been tough for them,” Sheehan explains. Hopper agrees, adding that they’ve “all grown up being different,” so “accepting each other for being different” is the norm.

And ultimately, even if they still squabble, Hopper says nothing can break the Umbrella Academy’s bond. “They're always so used to being mean to each other, but that's siblings, right?” he says. “When it really matters, and it's something that comes down to love and what's the right thing to do, we put everything else aside because one of our own needs us.”

More like this
Watch The Trailer For Netflix’s Edgy New Comedy 'FAKES'
By Brad Witter
Does 'Locke & Key’s Ending Mean There Could Be A Season 4?
By Sophia Moore
What’s New On Netflix: 'Never Have I Ever' & 'Indian Matchmaking' Return
By Arya Roshanian
Here’s How You Can Watch Season 3 Of 'Never Have I Ever' In The UK
By Frances Stewart
Get Even More From Bustle — Sign Up For The Newsletter