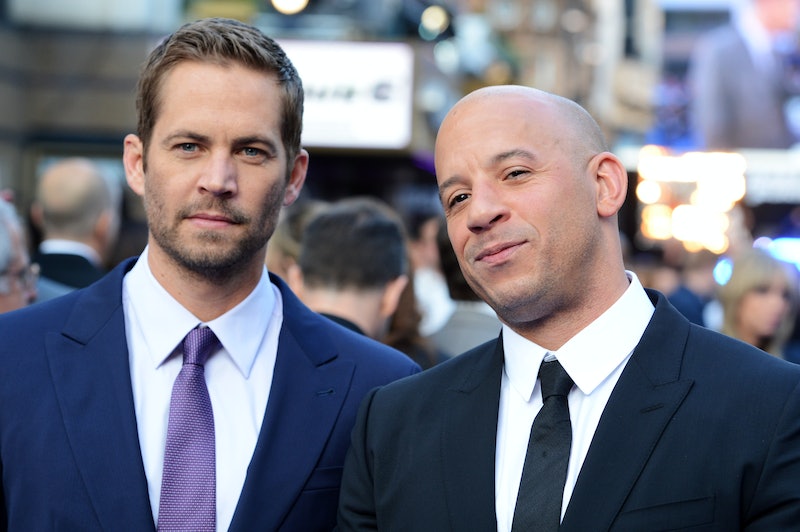 Though a bride’s father usually “gives her to be married” during traditional wedding ceremonies, the late Paul Walker’s daughter Meadow had the next best thing. Stepping in for his close friend, Vin Diesel walked goddaughter Meadow down the aisle when she married actor Louis Thornton-Allan in the Dominican Republic earlier this month. The 22-year-old model announced her marriage via Vogue on Friday, Oct. 22 and also shared wedding photos and video on Instagram the same day.

Diesel and Paul’s Fast & Furious co-star Jordana Brewster, who could be seen hugging Meadow in one post, also attended the small beach ceremony, while fellow castmates Tyrese Gibson and Chris “Ludacris” Bridges sent well wishes on social media. Though pandemic-related travel restrictions prevented several close friends and family members from attending the ceremony, Meadow — who wore a custom Givenchy Haute Couture dress — said she was pleased with how everything turned out. “We couldn’t have imagined it to be any more perfect and personal,” she told Vogue. “Louis and I knew exactly what we wanted from the start. It was a very intimate celebration.”

Diesel has remained close to and “very protective” of Meadow ever since her father’s fatal car crash in 2013. “I could say that I am so proud of the person you are becoming... but the truth is I have always been proud of you,” he captioned a November 2019 Instagram birthday tribute. “I know it’s your 21st and you wanted to go big in Japan, but the family has a cake waiting for you when you get home, so hurry. Love you kid. Uncle Vin.”

In fact, the dad to Hania (aka Similce), 13, Vincent, 11, and Pauline, 6, even revealed to Extra in June that his goddaughter is the first person to wish him Happy Father’s Day every year. “There are moments when I see her playing with Pauline and it hits me so deep ’cause I can only imagine what my brother sees when he sees that,” he shared, calling Meadow’s bond with his kids “one of the most beautiful things.”

After all, Diesel’s 6-year-old is named after her father. “There’s no other person that I was thinking about as I was cutting this umbilical cord. I just ... knew he was there,” Diesel recalled to Today in 2015 of welcoming daughter Pauline with wife Paloma. “It felt like, you know, a way to keep his memory a part of my family and a part of my world.”

Meadow, for her part, also shares photos of herself spending time with Diesel’s children, captioning one June 2020 post “family, forever” and also calling the actor her “family” and a “legend” in others.

It’s no wonder she chose her “Uncle Vin” to escort her down the aisle on her wedding day.

More like this
The First Look At Halle Bailey’s Ariel In ‘The Little Mermaid’ Has Twitter Hyped
By Brad Witter
Ben Affleck Wrote A 12-Page-Long Speech For Wedding To Jennifer Lopez, Says Kevin Smith
By Brad Witter and Radhika Menon
20 Years Later, Kelly Clarkson & 'American Idol' Judges Reunite For Her Hollywood Walk Of Fame Star
By Radhika Menon
Drew Barrymore & Justin Long’s Reunion On Her Talk Show Had Her In Tears
By Radhika Menon
Get Even More From Bustle — Sign Up For The Newsletter