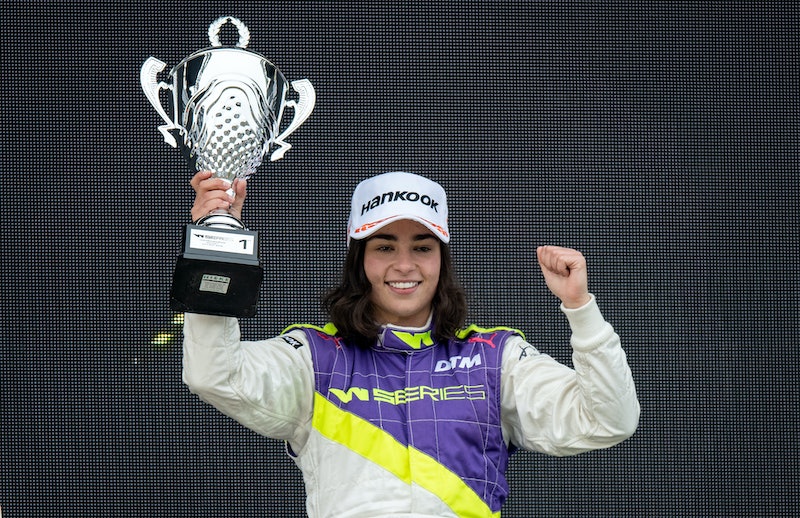 Thanks to a dad who couldn't get enough of a Sunday Grand Prix, I grew up watching Formula One races. But even as a child, I couldn't help notice the lack of women in the driving seat. There wasn't just more men; they were all men. So the introduction of W Series, an entirely female-led motorsport, is music to my ears.

The brand new racing series has just finished its opening round. On May 4, 20-year-old British driver Jamie Chadwick won the 18-car race in Hockenheim, Germany, reports the Guardian. She believes that it's a stepping stone to a Formula One career.

"It’s not going to be the case that if I win W Series, I’ll be in F1 next year,” Chadwick told the Telegraph. "The real benefit W Series offers is in enabling a step up to the global F3 competition in 2020, and potentially F2 after that. If we see a woman being competitive at those levels, you will naturally see her graduate into F1."

In the history of Formula One, almost 900 drivers have started a race, states the Guardian. But only two of those hundreds were women. Both were Italian. Maria Teresa de Filippis appeared in the '50s while Lella Lombardi raced in the '70s.

Along with elevating women to the next stage in their career, W Series has been highly praised for its accessible selection criteria. The majority of racing series require drivers to raise a mega amount of money. As the Telegraph reports, an international Formula Three race needs a minimum of £800,000 from each driver.

W Series recognised that most women fail to ever receive that level of financial backing, so asked for nothing from applicants except a high standard of racing. All of the chosen drivers will also be competing in identical Formula Three cars, giving them an equal chance of winning. The winner will receive a $500,000 (just over £380,000) prize, but every driver selected will receive a portion of the overall $1.5 million (£1.1 million) prize.

"In order to be a successful racing driver, you have to be skilled, determined, competitive, brave, and physically fit, but you don’t have to possess the kind of super-powerful strength levels that some sports require. You also don’t have to be a man," former Formula One driver David Coulthard said in a statement. "That’s why we at W Series firmly believe that female and male racing drivers can compete with one another on equal terms given the same opportunity."

As Chadwick explained, the next step for a successful W Series driver will be Formula Three. They will then have to progress through Formula Two before reaching the pinnacle: Formula One. But allowing female drivers from any background to show off their skills on live TV (every race will be broadcast on Channel 4) is something worth celebrating.

If you want to support these talented individuals, W Series will be hitting the UK in August. The finale of the female racing season will be held at Brandshatch on August 11 with tickets costing £30 per adult.

It's only a matter of time before these names go down in history.