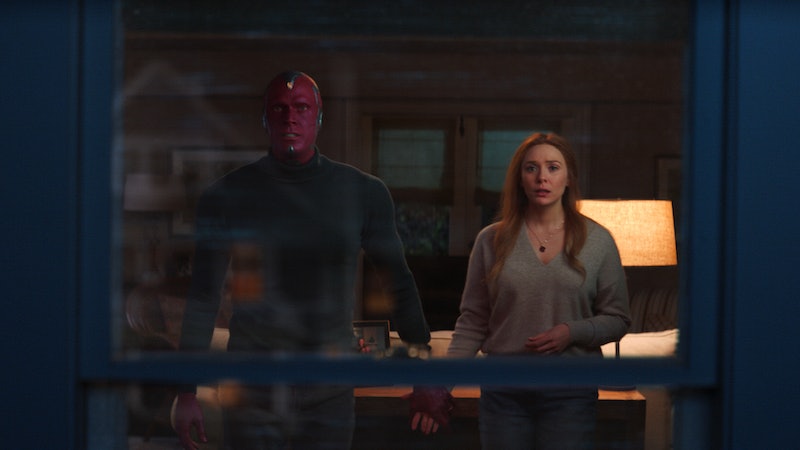 Spoilers ahead for the WandaVision finale. On WandaVision, Wanda’s denial over Vision’s murder is so fierce that it takes hostages: in one anguished moment, she accidentally traps the entire New Jersey town of Westview inside a fake reality. But freeing the town from Wanda's will is a protracted effort with more than one false start. If the first few episodes of WandaVision demonstrate the destructive power of unchecked grief, then the finale shows us that acceptance is a more gradual, deliberate part of the mourning process.

It takes four episodes for Wanda to work through her denial sufficiently to see how she’s imperiled the people of Westview, but it takes another five for her to actually release them. The delay is not a matter of ability; Wanda knows how to undo the magic she inadvertently conjured when she came to town. And it’s not about the S.W.O.R.D. agents waiting just beyond the limits of The Hex: when she casts Monica Rambeau outside of the town in Episode 4, it’s clear Wanda is not afraid of reprisal. Even when Vision finally catches on to what Wanda is doing, prompting her to realize they can't live in suburban bliss forever, she's too emotionally paralyzed to do anything about it. Her ambivalence lasts all the way into the season finale. As she faces off against Agatha Harkness, she begins to dismantle The Hex only to stop when she sees Vision and their sons withering into digital pixeldust. Wanda knows that Vision is already gone, but it’s not enough. Realizations are flimsy and our minds are too efficient at discarding what we’re not prepared to absorb. It takes time for hard truths to coalesce. Acceptance isn’t just a matter of opening one’s eyes, but keeping them open.

Eventually, Wanda does. In her final showdown with Agatha, she accepts herself as the Scarlet Witch, an identity she’d resisted. And in defanging and sequestering Agatha, she’s suddenly a hero again, capable of incredible self-sacrifice. In this case, that means lasting acceptance that Vision is gone. She makes an affecting goodbye to her children and a hopeful one to her love. “We have said goodbye before,” Vision tells her as the contracting Hex bears down on them, “so it stands to reason—” “—we’ll say hello again,” Wanda finishes.

Initially, the promise of a future reunion may seem like a cop out. It’s easier to say goodbye out loud when in your heart you only mean see ya later. Wanda's cheating. But one reason WandaVision has been so consistently affecting is because of the way it's allowed Wanda's humanity to sneak up on us. Whether it’s a heartbroken person resolving that their break-up was for the best or a someone assuring themselves that the loved one they lost is in a better place, acceptance can be more than acquiescence to a new reality. It can be hopeful.