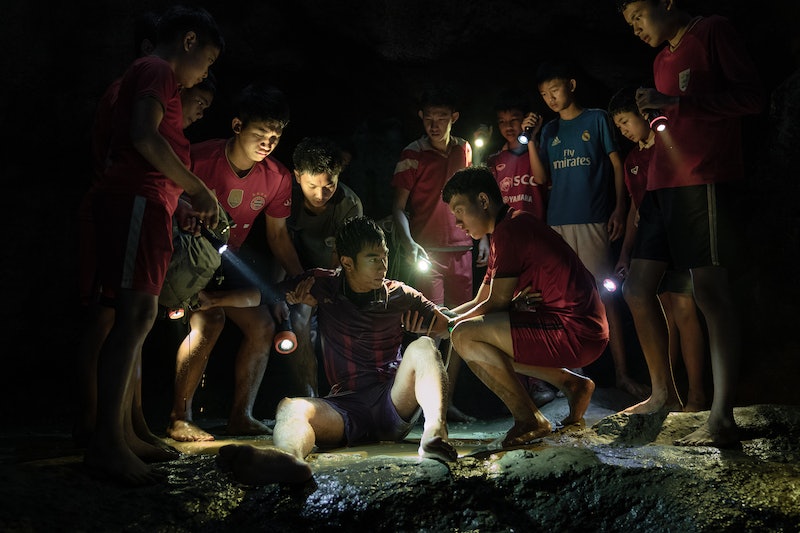 Inspired by the captivating true story of a youth soccer team and coach who got trapped in one of the world’s most dangerous cave systems in 2018, Netflix’s Thai Cave Rescue revisits the extraordinary efforts to save all 13 people. For three weeks, the boys’ families joined with volunteers all over the world working against nature and time to rescue the team, and though they were ultimately successful in doing so, two of the rescuers died as a result of the perilous mission.

Shot entirely in Thailand, the six-episode limited series is a scripted, dramatized retelling of what happened both inside and outside of northern Thailand’s Tham Luang cave. However, co-creators and writers Michael Russell Gunn and Dana Ledoux Miller tried to stay as true to life as possible, interviewing the real boys from the Wild Boars soccer team and shooting scenes at their actual homes. For the underwater cave diving scenes, Dr. Richard “Harry” Harris — the Australian anesthesiologist and cave diver who took part in the 2018 rescue — served as the body double for Rodger Corser, who plays him in the show.

The harrowing real-life events had all the hallmarks of a cinematic experience anyway. Following a team practice on June 23, 2018, 12 Wild Boars, ranging in ages from 11 to 16, entered the Tham Luang cave with their 25-year-old assistant coach, Ekapol Chantawong, aka Coach Ek. Soon afterward, heavy monsoon rainfall partially flooded the cave system, leaving no way out for the trapped group.

“When we went in and got stuck in the cave, at that moment, we saw water. It’s full of water,” Coach Ek later explained to ABC News. “I then volunteered to dive to find out if I could go through or not. If I could go through then everybody is saved. So, we used the rope that we brought with us.” After his attempt proved unsuccessful, he did his best to keep his team calm. To do so, they repeated the Thai mantra “su su,” which translates to “keep fighting.”

Nine days later, British divers located them on a rocky ledge nearly 2.5 miles inside the cave on July 2. Any celebration quickly dissipated, however, when it became clear just how risky and dangerous the rescue mission would be. Later, retired fireman Rick Stanton described his initial feelings of excitement and relief when he and fellow diver John Volanthen found the group still alive.

“As they were coming down the slope, we were counting them until we got to 13. Unbelievable,” he said during a July 2018 press conference in London. “Then, of course, when we departed, all we could think about was how we were going to get them out. So there was relief, tempered with uncertainty.”

As the world watched in disbelief, a team of international cave diving experts worked for days crafting a retrieval mission, but by July 6 they experienced their first casualty when former Thai Navy SEAL Saman Kunan died from lack of air while attempting to deliver oxygen tanks inside the cave. A second Thai Navy SEAL, Petty Officer Beirut Pakbara, contracted a blood infection during the rescue mission, and later died from the illness in December 2019.

Meanwhile, the team was starving and running out of oxygen, though they were able to survive by drinking fresh water that dripped from a cave stalactite. On July 8, however, things started to look up when the first group of four boys were heavily sedated and rescued one-by-one and transported to Chiang Rai Prachanukroh Hospital. The next day, four more of their teammates exited the cave, and, finally on July 10, the remaining boys and Coach Ek were successfully freed.

“The last day was the worst day,” British diver Vern Unsworth told CNN. “The third day you have to get five out, plus four Navy SEALs, and the weather is changing quite rapidly. The water levels did come up..... You could see it happening. You could feel the tension.”

After weeks of uncertainty, the whole team survived. “Just to get any of them out alive would have been a miracle. But to get 13 out of 13 … won’t happen again,” Unsworth added. “[It’s the] biggest miracle ever.”