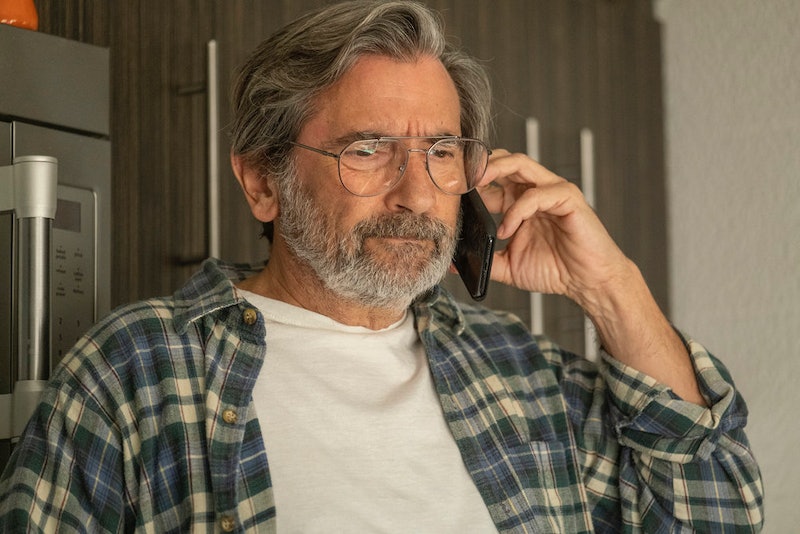 Spoilers for This Is Us Season 5, Episode 10. It’s been a while since Nicky has been prominently featured on This Is Us, but it looks like his storyline is about to get bigger. At the end of the March 16 episode, Nicky showed up on Kevin’s doorstep. We don’t know yet what Nicky is doing there, but there are a few hints that he might want to move in with Kevin.

The first clue is that Beth’s mom moved in with her family in the same episode, so Nicky moving in with Kevin would make for an apt parallel. Kevin also jinxed himself by saying to Madison moments before the doorbell rang, “I’m very OK with it just being us, at least for a while.” Apparently “a while” was only 30 seconds.

It’s unclear what prompted Nicky to show up, but it probably has something to do with Kevin having twins. A couple of episodes ago, Kevin revealed that he’d named his son after Nicky, and his uncle seemed really touched by that. “You named him after me? How ‘bout that,” Nicky said at the time. Considering he wasn’t involved in his nice and nephews’ lives when they were young, this may be Nicky’s attempt to make up for it with his namesake.

This also kind of needed to happen. Right now, Nicky’s biggest connection to the Pearsons is through Kevin. But at some point, he gets comfortable enough with the family that he’s there by Rebecca’s bedside in the flash-forward. “I think Nicky ended up at that bedside presumably because Rebecca and Nicky grow very close,” actor Griffin Dunne previously teased to People magazine. Indeed, some theories suggest that the two even get married later on, because Nicky is wearing a wedding ring in the flash-forward. (Others think he’s standing in for Jack because Rebecca can’t remember that her husband is dead.)

Showing up at Kevin’s house is perhaps Nicky’s first step on the road to becoming more involved with the family. And if Nicky does want to move in, Kevin is unlikely to say no. He has a soft spot for his uncle because of their shared experiences with alcohol dependency. They also both have a sense of regret about not getting to apologize to Jack before he died.

Besides, even if Kevin doesn’t want Nicky to move in, he’s not really capable of rejecting his uncle. As executive producer Elizabeth Berger put it in a Season 4 interview with Entertainment Weekly, “Kevin is desperate to find purpose and to find meaning ... There’s something comforting about being able to put that energy into Nicky.”

Kevin previously spent some time living next door to Nicky’s trailer in Season 4, and for the most part they got along great. Now, Nicky is returning the favor by showing up unannounced. This is their chance to reconnect as well as Nicky’s chance to get to know Kevin’s kids. Expect him to be sticking around for a while.

More like this
'The White Lotus' Season 2 Trailer Teases Multiple Affairs & Another Dead Body
By Bustle Editors
Who’s The Richest 'Grey’s Anatomy' Star? See The Net Worth Of Each Cast Member
By Hugh McIntyre
Dan Levy Appears In The Latest Teaser For The Weeknd's HBO Series, 'The Idol'
By Jake Viswanath
Kidnapping Victim Jan Broberg Is Prepared For A Friend Of The Family Criticism
By Brad Witter
Get Even More From Bustle — Sign Up For The Newsletter