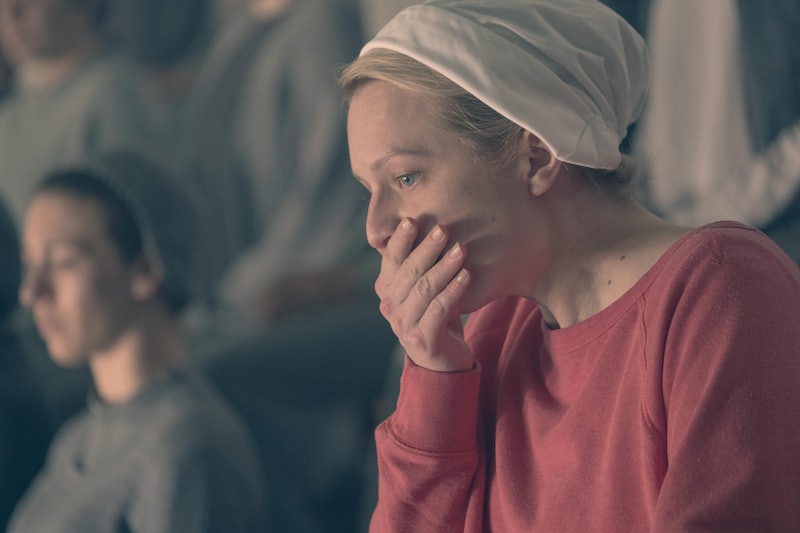 There's not much hope in The Handmaid’s Tale. In Season 2, Offred knew that she had to learn how to survive to get through what was happening to her and the other Handmaids. And a message of perseverance eventually came via a note her old self scratched in her closet, which she rediscovered. Nolite te bastardes carborundorum would become her motto, and its meaning might resonate with viewers today.

At the time, Offred didn't have much to do when she wasn't with the Commander or doing the daily shopping, especially when she got locked in her room for weeks for failing to get pregnant. So she analyzed every detail of her sparse, tiny bedroom. She looked at the embroidery of her pillow, her bedspread, the curtains, the windows, etc. She eventually noticed a Latin phrase subtly etched near the floor. It said nolite te bastardes carborundorum, and since Offred doesn’t speak Latin, she didn't know what it translated to. Later Offred, bolstered by her nightly Scrabble interactions with the Commander, mustered the courage to ask him if he could interpret it for her, and he did. He laughed at first because it’s a bastardized version of a phrase, but it translates to “don’t let the bastards grind you down.”

For the Commander, he thought that this is just a funny turn of phrase or a joke, but for Offred, it meant more. It was a demand that she keep pressing on, especially since things weren't going that well. She hadn't gotten pregnant by the Commander yet, and Handmaids who don’t get pregnant quickly are usually passed to the next man or sent to the Colonies to clean up putrid, toxic sludge until they die from nuclear exposure. Offred’s best pal Ofglen (aka Emily) was taken away because she had a forbidden romantic relationship with one of the Marthas (the maids of Gilead). Ofglen, a Handmaid and still valuable, was forcibly circumcised, while her lover was hanged from a crane. Offred was also questioned by the Eyes — they wanted to know what she knew about Ofglen, and Aunt Lydia shocked her with a cattle prod and beat her to confess. So yeah, Offred and the other Handmaid's lives weren't exactly rainbows and unicorns at that point.

Still, she had to press on. As Offred said in her voiceover, she intends to survive, and she intends to do whatever she can to come out of the other side of this totalitarian structure of Gilead. Offred once told Oflgen that she wasn’t really a fighter, didn’t know what she could do in terms of the resistance, and Ofglen said that no one knows until they actually have to do it. This Latin phrase would become the thing that keeps Offred moving.

More like this
On 'The Handmaid’s Tale,' Christine Ko Fights Back
By Gretchen Smail
Nicola Coughlan Shared A Lady Whistledown Excerpt From ‘Bridgerton’ Season 3
By Grace Wehniainen, Alyssa Lapid and Sam Ramsden
Viserys’ Fate On 'House Of The Dragon' Could Differ From The Book In This Surprising Way
By Grace Wehniainen
The 'Reasonable Doubt' Cast Includes A 'Save The Last Dance' Reunion
By Grace Wehniainen
Get Even More From Bustle — Sign Up For The Newsletter

This article was originally published on May 3, 2017