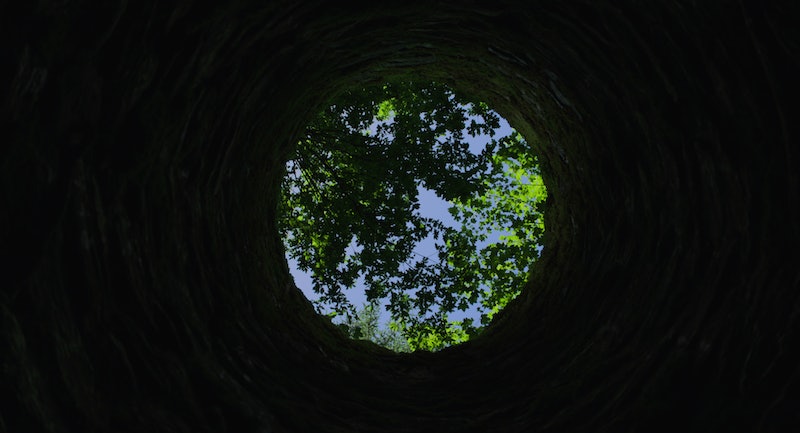 You've been warned: spoilers for all of Behind Her Eyes ahead. In Netflix's psychological thriller Behind Her Eyes, the forest is everywhere. It’s the backdrop for Adele’s stay at the psych ward, the lush hills surrounding her family pile, and the mural she paints on the bedroom wall when she and David move to London. It also appears in curious editorial moments: Throughout the limited series' six episodes we get sudden glimpses of green splicing together ordinary shots of the characters’ lives without any explanation. If the central mystery of the show is what’s wrong with Adele, the glances of forest are the breadcrumbs.

The forest becomes an identifiably important symbol in the second episode, when Adele decides to redecorate the master suite with some amateur yet impressive woodsy wall art. But what seems like a harmless, maybe even thoughtful, gesture towards her and David’s shared Scottish past is met with disbelief. “Why would you do this?” David asks her before backing away from her. It’s not simply that the image upsets him; he can’t bear to be in its presence.

We only get clarity around the significance of the forest at the end of the series, when we learn that Adele isn’t really Adele anymore and hasn’t been for a long time. The forest outside Adele’s family estate is where Rob and Adele switched bodies before Rob killed Adele and threw his own bag of bones down a deep well. Of course, David doesn’t know this. To him, the forest is where he and Adele are keeping Rob’s dead body a secret, a memory that haunts him daily. When Adele paints the mural, he perceives more of a threat than a romantic nod — knowing that David is having an affair and perhaps sensing that he may want a divorce, Adele (really Rob) reminds him of the secret she (he) holds over him.

The other glimpses of forest shift slightly throughout the series, but usually they’re a circle of greenery surrounded by black, like looking through a telescope. After we learn what happened to Rob’s body, it’s clear we’re not looking through, but up, from the bottom of a well. In some of these moments, David is at the top of the well. The last time it happens, we see Rob on top. But it’s only in the last episode that these glimpses of forest add up to a flashback revealing what really happened the night of Rob’s supposed death. With that knowledge, the forest goes from representing the unknown to representing something far more sinister: it's what binds David to Rob without David knowing he’s bound to Rob at all.