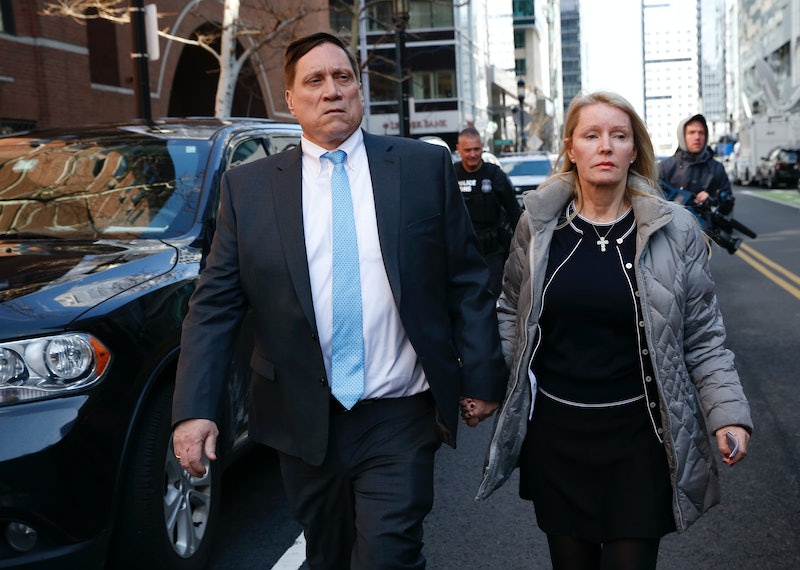 In the world of Operation Varsity Blues: The College Admissions Scandal, John B. Wilson stands out, even if you don’t know who he is. The private equity firm founder and former Staples Inc. executive is one of the 33 parents charged for his participation in William “Rick” Singer’s college admissions scam, but he’s among just a few who have pleaded “not guilty” to the charges. Therefore, while some of those tied to the scandal have already served time, John Wilson is still awaiting trial.

The Netflix documentary includes recorded phone calls between the Hyannis Port Capital founder and Singer, and Wilson seems the most ostentatious with his wealth (no small undertaking). In some of the recordings heard in Operation Varsity Blues (named for the FBI investigation), Wilson invites Singer to join him in France the following summer, where Wilson says he’s “rented out Versailles” for a black-tie birthday party.

His contributions to Singer’s phony foundation were similarly lavish. The dad of three is accused of paying more than $1.7 million in bribes over several years to help get his children into the University of Southern California, Harvard University, and Stanford University. For his part, Wilson has claimed that while he engaged Singer’s services (even going as far as to get his son recruited as a water polo player), he did so under the assumption it was a legitimate, legal pathway for his children.

As of March 2021, Wilson has still not faced the court to determine his fate. Under the prosecutor's proposed trial schedule of the more than 50 people charged in relation to the Operation Varsity Blues investigation from last year, his trial was slated for either “early 2021” or “late spring” of this year, per the Boston Business Journal. Because he pleaded “not guilty” to the charges he faces, his trial will be longer than someone like Felicity Huffman, who accepted all fault for her part in the college admissions scam.

Although Wilson hasn’t made it to court yet, he and his legal team have already been wrestling with prosecutors to help shore up their case. In one filing, Wilson’s camp asked the U.S. Attorney’s office to turn over transcripts between the government and Singer, particularly those that would illustrate what Singer told his clients about the legitimacy of the “side door” he offered for students’ admission, per the Boston Business Journal. Prosecutors say they are not withholding any evidence unlawfully, and that in fact the transcripts the defense has are damning in their own right; Wilson and his wife, Leslie, emailed back and forth with Singer about what would be expected of their son as an athletic recruit and how long he’d have to play, according to WBUR. When Wilson once again worked with Singer in 2018 for his twin daughters’ college admission processes, law enforcement (who were by then working with Singer) pushed Singer to be even clearer about the quid pro quo.

“I’m going to send John [Vandemoer, the Stanford sailing coach] directly the check, to the coach. I can send him your [$]500,000 that you wired into my account to secure a spot for one of your girls,” Singer told him, according to court documents. “I’ll mark that she’s a sailor, because she is, but not at the level where she can sail at Stanford.”

Since the initial charges of bribery and wire fraud were brought, Wilson has been hit with an additional charge of filing a false tax return. He allegedly paid Singer and his company $200,000 after his son got into USC, and then claimed $100,000 as a charitable contribution and $120,000 as business consulting fees, according to Buzzfeed. Wilson will have his day in court, but for now, his legal situation remains unresolved.

More like this
Andrea Arlington, Alexis Neiers Haines’ Mother, Now Works As A Life Coach
By Morgan Leigh Davies
Where Is The Bling Ring’s Rachel Lee Now?
By Arya Roshanian
Lori Vallow’s Son Was Arrested For Sexual Assault Days Before 'Sins Of Our Mother' Premiered
By Brad Witter
Lori Vallow Faces The Death Penalty For Allegedly Murdering 2 Of Her Children
By Brad Witter
Get Even More From Bustle — Sign Up For The Newsletter