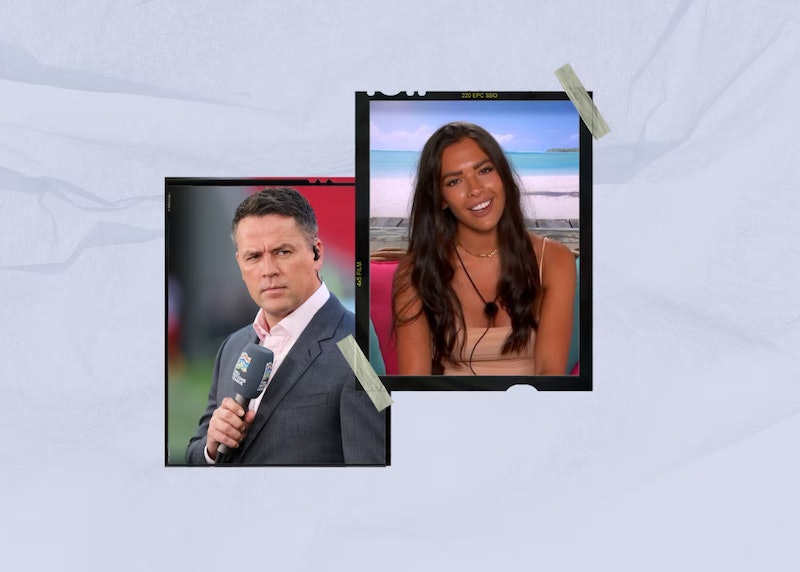 It seems every series of Love Island includes an Islander with a pretty famous link (remember Dani Dyer?) and this series is of course no different with 19-year-old Gemma Owen, whose dad is ex-footballer Michael Owen. If football isn’t really your thing, Owen played as a striker for teams including Liverpool, Manchester United, Real Madrid, and Newcastle United from 1998 up until his retirement from the sport in 2013. Now, he’s a regular pundit for football matches.

If you haven’t heard, Love Island’s Gemma Owen has a famous dad. Although she’s done a sterling job of not really mentioning it* on the show, her dad is having a harder time avoiding the topic outside the villa. Former striker and father of the 19-year-old Islander, Michael Owen, has made it clear that he doesn’t really want to watch or talk about the programme. He even joked(ish?) on Channel 4's coverage of England’s game against Germany in the UEFA Nations League, that he’d travelled “all the way to Germany to try and avoid all that back home, but it has been brought up straight away!” And frankly, who would want to see their daughter do a lapdance for a 23-year-old fishmonger, to a backing track of Ginuwine’s ‘Pony’, a.k.a the Magic Mike song?

Although he’s announced that he doesn’t really want to get involved, he has been watching from the sidelines. Speaking to ITV before Love Island began, he said that his daughter had assured him “that it’s not as bad as I think. So, we'll give it a watch and I hope she enjoys herself.”

Before Love Island 2022 aired, Owen shared some of his thoughts about his daughter going on the hit dating show. The 42-year-old told ITV on June 7, “I have no doubts that she will make us all proud. It's probably a father's worst nightmare, but whatever she wants to do you've got to be supportive.”

He went on to say, “It's been different without her in the house. I've got other kids and my wife, and it's been quite tough because she's had to switch her phone off and we've had no contact for a couple of weeks, so that’s been the hard bit. She assures me that it’s not as bad as I think. So, we'll give it a watch and I hope she enjoys herself.”

Owen reluctantly spoke out after the first episode of Love Island aired on June 6. He was left in a pretty sticky situation when his co-presenter, Jules Breach — for Channel 4's coverage of England’s game against Germany in the UEFA Nations League — jokingly introduced him on the broadcast as “the father of Love Island's Gemma Owen”.

Breach then continued to ask Owen, “A big night for the Owens last night, Michael. How are you feeling?” to which he replied, “I came all the way to Germany to try and avoid all that back home, but it has been brought up straight away!” Explaining further, he added, “But I am feeling alright. This is taking my mind off it so don't bring it back up.”

What Does He Think About Luca Bish?

Michael hasn’t shown his future son-in-law the red card just yet, but Owen’s mother Louise has hinted that she’s not a huge fan. Louise Owen has made some cryptic comments on fellow Islander Tasha Ghouri’s Instagram in relation to Bish’s behaviour towards her. But, the comment in question has since been deleted, so perhaps she has had a change of heart.

Michael has reportedly said that he would like to meet Bish, if things are to become official between the fishmonger, which Owen has confirmed to her fellow Islanders.

Is He Going Into The Villa For The ‘Meet The Parents’ Episode?

Sadly not. Speaking to Sky Sports’ ‘At The Races’ earlier this month, he said that “My wife will do that duty. I’ll represent the horses and she’ll represent the daughter.”. Hard luck, Bish.

*She’s only been recorded talking about it with fellow famous-dads-club member Jack Keating, son of Ronan. Either she only talks to other people with famous parents, or the Love Island producers are Arsenal fans and have made the executive decision to ban Michael’s name from the show wherever possible.

More like this
Ekin-Su & Davide’s Next Move Is Confirmed & Involves *A Lot* Of Travel
By El Hunt
A Full Debrief Of Who Follows Who From Love Island – & Who Doesn’t
By Shahed Ezaydi
The Love Island 2022 Reunion Drama, Explained
By Sophie McEvoy
Fans Are Convinced That 'Love Island's Gemma & Luca Have Secretly Split
By Frances Stewart
Get The Very Best Of Bustle/UK

This article was originally published on June 10, 2022