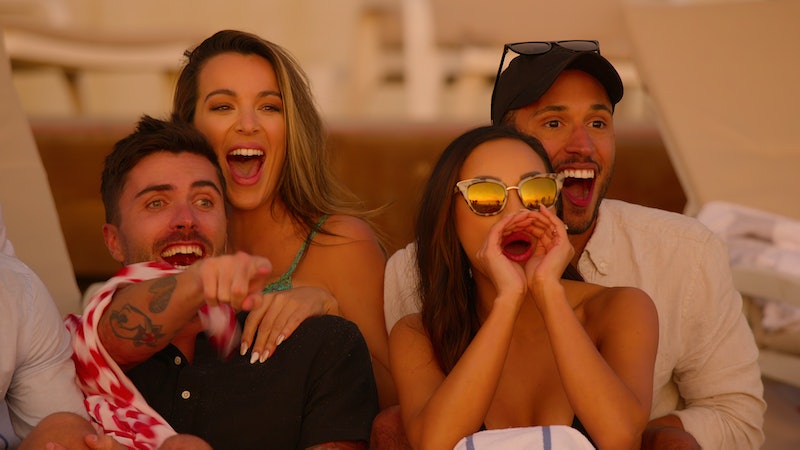 The heart of Selling The OC’s drama isn’t whether one or all of the Alexandras in The Oppenheim Group’s Newport Beach office are bullies or that Kayla Cardona tried to kiss the married Tyler Stanaland. It’s if Alex Hall’s “nosey” move is sexual or not. The bizarre act happens during the agents’ beach party mid-season; after a couple of cocktails on the beach, Hall takes Tyler’s face into her hands and proceeds to put her whole mouth over his nose.

This particular nosey — there have been many more, according to Bustle’s conversations with various cast members — happens sometime between the two off-camera incidents where Kayla tried to kiss Tyler. Hall and the other agents, like Polly Brindle, Brandi Marshall, and Austin Victoria, started to ice out Kayla for what they saw as overly flirtatious behavior with their married friend. But when Alexandra Rose, who was also at the beach party, reported back to Alexandra Jarvis that Hall put Tyler’s nose in her mouth, the mood shifts, and a contentious debate about the nosey begins.

What Is A Nosey?

A nosey is when a person puts their mouth over another person’s nose and breathes on them. It started with Hall, who tells Bustle that a nosey is what her mom used to do to her when she was young. “It's something that my family has always just done,” Hall says. “It started with my mom doing it to her dog, and then it evolved to her doing it to me and then me doing it to my children. It’s this awkward, uncomfortable thing that no one ever expects.” After likening it to a “wet willy,” in which someone puts their finger in their own mouth and then wiggles it into someone else’s ear, Hall laughs and says, “It’s worse.”

To Hall, her nosey to Tyler seemed like a familiar, silly thing to do to someone with whom you are close. But given that some of the cast thought the move was a little too flirty, Bustle asked the Selling The OC agents if they thought Hall was crossing a line when she breathed onto her colleague’s nostrils.

Is A Nosey A Sexual Thing?

According to most cast members, a nosey is not a way to flirt. “It's kind of disgusting. It's not sexual at all,” Austin says, “When you do it, it tastes like whatever the person last ate. You get a burp of that.”

As if that wasn’t proof enough, Tyler calls noseys “the grossest thing to have ever been invented.” He explains, “One night at a party, Alex did it, and then it somehow became a thing in our circle — mostly Alex Hall giving them to everybody else.” Polly also says that the cast is a “tactile touchy-feely group,” so even if things are flirtatious, the noseys are most certainly not. “They’re part of a very young mentality of having a good time,” she explains.

However, Jarvis still considers noseys a little too close for comfort. “Honestly, I think it’s gross, but they’re going to do what they want to do,” she says. “Alex Hall is all over Tyler, and she’s all over all of the guys. That’s just how she is, even if they’re married men.” Even Kayla maintains that noseys can be flirtatious, adding she isn’t the one everyone in the cast needs to be worried about. “If they are willing to suck on [Tyler’s] nose and get naked on camera, what do you think they're willing to do outside of the cameras?” she says. “Let's just keep it real.”

With the cast partly divided, it looks like the nosey will most definitely remain a thing going if Selling The OC returns for Season 2.

More like this
'Bling Empire: New York’ Star Dorothy Wang Wants To Try 'The Simple Life'
By Alyssa Lapid
Andy Cohen Apologized To Larsa Pippen After A 'RHOM' Season 5 Reunion Dust-Up
By Brad Witter
At 28, Debra Jo Rupp Was Living A Much Different '70s Show
By Grace Wehniainen
Zach Reveals The Chaotic 30 Minutes That Were Cut From ‘The Bachelor’ Premiere
By Grace Wehniainen
Get Even More From Bustle — Sign Up For The Newsletter
From hair trends to relationship advice, our daily newsletter has everything you need to sound like a person who’s on TikTok, even if you aren’t.