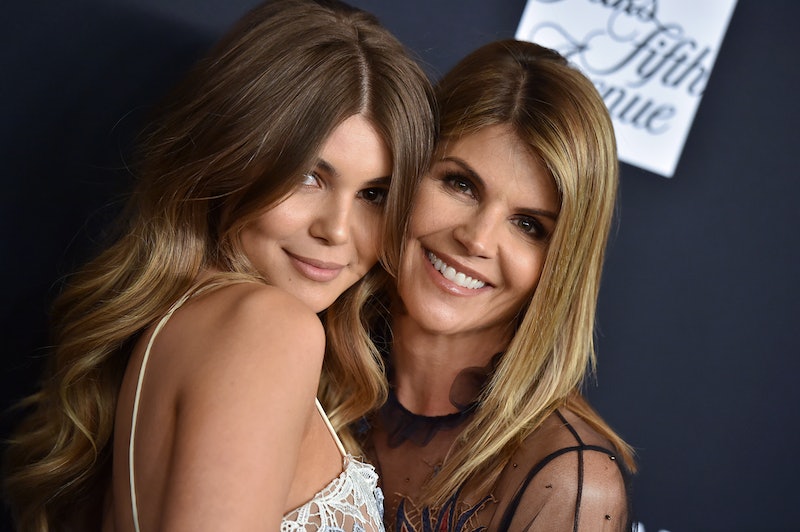 After two months in a federal corrections facility in Dublin, California, Lori Loughlin was released from prison on Monday, Dec. 28, and reportedly had a tearful reunion with her daughters, Olivia Jade and Isabella Rose Giannulli. In August, Loughlin admitted to one count of conspiracy to commit wire fraud and mail fraud in separate plea agreements as part of the nationwide college admissions scandal. The former Full House star was sentenced to two months in prison, a $150,000 fine, and 150 hours of community service.

Loughlin reported to FCI-Dublin in Northern California on Oct. 30 to serve her sentence, according to People. Now that she's done her time, the star is still required to complete the community service and pay fines. Meanwhile, an anonymous source told the magazine that the Fuller House star "seems beyond relieved that she can put her prison sentence behind her. It's the most stressful thing she has ever dealt with." Loughlin will also reportedly spend New Year's Eve with her daughters upon release. "It's the end of a very long ordeal," the source added.

Mossimo Giannulli, Loughlin's husband, is still serving his sentence. According to People, the designer's plea deal included 5 months in jail, a $250,000 fine, and 250 hours of community service. On Nov. 19, Mossimo reported to a federal prison in Lompoc, near Santa Barbara, where he is currently incarcerated. The anonymous source told the outlet that Loughlin is worried about Gianulli, and "can't wait to have him home."

Giannulli and Loughlin were accused of paying $500,000 to Key Worldwide Foundation to falsely recruit their daughters, Olivia and Bella, to the crew team at the University of Southern California. The wealthy couple was among more than 50 parents accused of bribing their children into a prestigious school. Loughlin and Giannulli will both be required to undergo two years of supervised release, or mandatory parole, following their prison sentences, according to USA Today.

Olivia Jade recently opened up about the college admissions scandal in an episode of Red Table Talk for Facebook Watch. "To be honest, I wasn't angry," she said when asked about her initial response to her parents' actions. "100 percent honesty, when it first happened, I didn't look at it and say, 'Oh my god, how dare we do this?' I was like, 'Why is everybody complaining? I'm confused about what we did.' That's embarrassing to admit."

The social media star also revealed in the interview that she was looking forward to reuniting with her parents again, who she hadn't spoken to since they began their prison sentences this past fall. "It's been hard," she said. "I think for anybody no matter what the situation is, you don't want to see your parents go to prison. But also I think it's necessary for us to move on and move forward."

It's unclear what will become of Loughlin's acting career. In March of 2019, Hallmark ousted Loughlin from its roster following the scandal. The star, who is perhaps best known for her role as Aunt Becky on Full House, was also asked not to return for the fifth and final season of the Netflix reboot Fuller House. Loughlin hasn't revealed if she will open up publicly about the scandal, either. In June, an anonymous source told Us Weekly that Loughlin is an "eternal optimist" who expects to return to television and "eventually, [wants to] tell her side of the story."

This article was originally published on Dec. 28, 2020