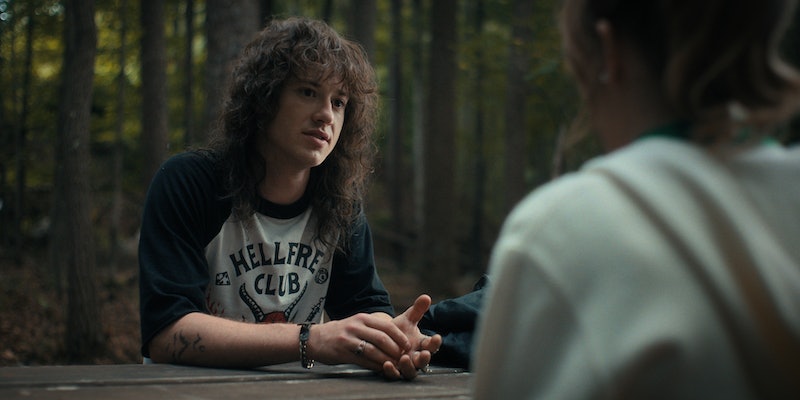 After Netflix released the official trailer for Volume 2, featuring Eddie Munson (Joseph Quinn) playing the guitar on top of his trailer, another question promptly followed: What song is Eddie playing? Quinn even teased his musical moment to The Guardian. “I can say there’s a guitar scene and that the scale and ambition are astonishing,” he told the outlet. The creators of the hit show also teased the big moment in an interview with Entertainment Weekly. “I can't wait for people to see that ... I won't say what song it is, but I think people are gonna be excited when they hear it,” Ross Duffer said.

On July 1, the final two episodes of Season 4 finally dropped and Eddie’s moment was every bit as epic as fans expected. In the finale, the metalhead leader of the Hellfire Club geared up for the battle with Vecna by grabbing his choice of weapon: his electric guitar. The move was a distraction tactic, aka Phase Three of Nancy’s (Natalia Dyer) four-phase plan to destroy Vecna. “Draw the attention of the bats, keep them busy for a minute or two, we’ll take care of everything,” Steve told Eddie and Dustin.

So, perched on top of his trailer in the Upside Down, with Dustin right by him, Eddie dedicates the song to Chrissy before he starts shredding the guitar to Metallica’s “Master Of Puppets.” Though Eddie was playing an instrumental version of the thrash metal song, the clips that cut to the other characters were superimposed with the actual 1986 track and, in some parts, Metallica’s vocalist James Hetfield could be heard singing.

Eddie’s epic Upside Down performance ultimately works and the trailer is swarmed by bats immediately — giving the rest of the gang in the Upside Down time to get into the Creel house. When things start to go south, he decides to stay in the Upside Down and fight off the monsters alone to bide his friends more time. The bats ultimately overpower Eddie in the attack, and, in one of the saddest moments in the season, he doesn’t make it.

As expected, Twitter is buzzing about Eddie’s song choice and it’s only a matter of time before the song makes it back to the charts. Stranger Things has been known to deliver viral moments musically and otherwise (even Eggo waffles went viral after Season 1). In Volume 1, Kate Bush’s 1985 single “Running Up That Hill” —Max’s (Sadie Sink) literal lifeline from being killed by Vecna — was catapulted to the top of the UK charts after the episodes aired. It’s a feat Bush herself called “so exciting” and “quite shocking.” (Even Eddie’s spoken lines went viral on TikTok in this “Chrissy wake up” remix by user schmoyoho.)

For decades, “Master Of Puppets” has been considered one of the greatest heavy metal songs of all time so it’s a fitting choice for Eddie. Hetfield spoke to Thrasher Magazine in the ’80s about the song and said, “‘Master Of Puppets’ deals pretty much with drugs. How things get switched around, instead of you controlling what you’re taking and doing, it’s drugs controlling you.” It also features a complicated guitar solo — which Eddie manages while an onslaught of bats descends upon them.

In an interview with Variety, Nora Felder, the Netflix hit’s music supervisor, said that “Master of Puppets” was the “clear choice.” “This part of the story was anticipated to be a pivotal and especially hair-raising scene in which Eddie heroically stood tall for the fight of his life,” Felder said. “No other song was discussed further, and we jumped in to clear it straight away.”

As if we needed a reason to love Eddie/Quinn even more, it turns out that Quinn was actually playing the song on the guitar in that scene. Quinn spoke about the experience to Variety and revealed which parts he played — and which ones he didn’t. “I was lucky that I had learned guitar when I was younger, so I had the foundation. By no means was I a virtuoso, but when it came time to shoot it, I was able to get through it,” Quinn said. “We had a sort of black-belt heavy metal guitarist take us through the solo, because that wasn’t going to happen! I couldn’t do that, but I could do the rest of it, which is lucky. It was an amazing experience.” (Felder said that Metallica was happy with Quinn’s performance.)

The Duffer Brothers told Entertainment Weekly all about Quinn’s musical prowess. Calling Quinn “amazing,” Ross said, “We cast Joe Quinn, not knowing he’s an incredible musician, as well as being this magnificent actor. So we were very lucky. I just remember that we texted him or called him and said, ‘Hey, by the way, can you play guitar?’ And he’s pretty modest, so he’s like, ‘Yeah, I’m pretty good.’ He’s more than pretty good. He’s amazing.” He added, “He spent many, many, many, many hours perfecting it.”

More like this
'The Sandman’s Ending Is A Departure From Neil Gaiman’s Comic Book Series
By Kadin Burnett
'Stranger Things' Season 5 Will Echo Season 1 In A Key Way, The Duffer Brothers Confirm
By Kadin Burnett and Sophie McEvoy
The 'House Of The Dragon' Showrunners Revealed One Key Similarity With 'GoT'
By Grace Wehniainen and Kadin Burnett
The 'PLL: Original Sin' Season Finale Finally Revealed A’s Identity
By Alyssa Lapid and Kadin Burnett
Get Even More From Bustle — Sign Up For The Newsletter