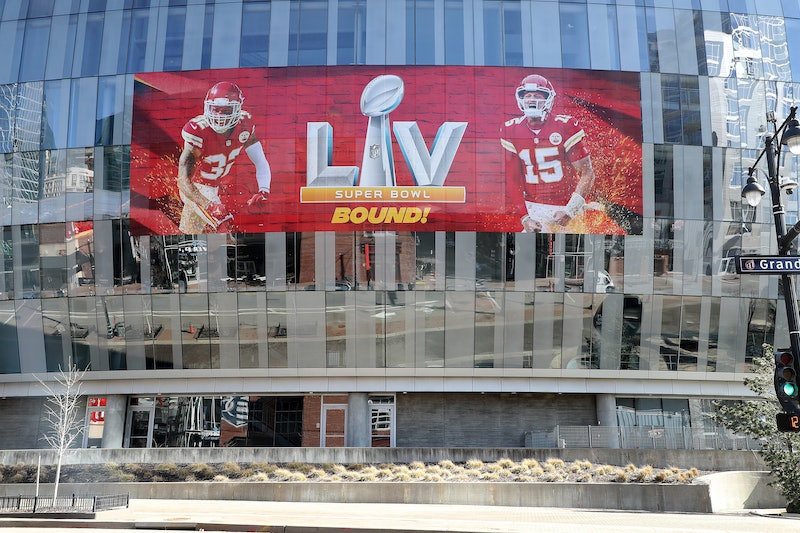 The Super Bowl is always one of the longest football games of the year, thanks to lengthy commercial breaks and a super-sized Halftime show. According to The Verge, the average Super Bowl game lasts three hours and 44 minutes, but CBS is planning for the 2021 Super Bowl to end in about three and a half hours. The official run time for the Feb. 7 game is 6:30 p.m. ET to 10 p.m. ET. The game could run shorter than that or longer, depending on how many time outs are used, fouls are called, and whether the teams have to go into overtime. Last year's Super Bowl was a close game and it lasted until about 10:10 p.m., so this year could follow a similar timeline.

The Super Bowl festivities can also last way longer for fans who choose to watch all the coverage leading up to the game. There's pregame content airing on CBS beginning at noon, including interviews with players looking back on the season, predictions about the game, and general football talk leading up to the 6:30 p.m. kickoff. After the Super Bowl, CBS plans to roll right into the premiere of the new Queen Latifah show, The Equalizer, from 10 p.m. until 11 p.m. ET.

Post-Super Bowl viewership numbers are often extremely high, and networks like to take advantage of the time slot to air a particularly special episode or to premiere a new show. For example, the Grey's Anatomy Kyle Chandler bomb episode had a post-Super Bowl slot in 2006, and it brought in nearly 38 million viewers. And the This Is Us episode that finally explained Jack's death brought in nearly 27 million after the 2018 Super Bowl. The Equalizer could be off to a big start if enough Super Bowl fans stick around after the end of the game — which should be right around 10 p.m. ET.

More like this
Twitter Is Freaking Out Over Rihanna’s 2023 Super Bowl Halftime Show Announcement
By Stephanie Topacio Long
Pro Footballer Zander Murray Is "Blown Away" By Support After Coming Out
By Sam Ramsden
How Much Are The 'Schitt’s Creek' Stars Worth?
By Hugh McIntyre
The ‘Kevin Can F**k Himself’ Season 2 Finale Twist Is A Full Circle Moment
By Grace Wehniainen
Get Even More From Bustle — Sign Up For The Newsletter