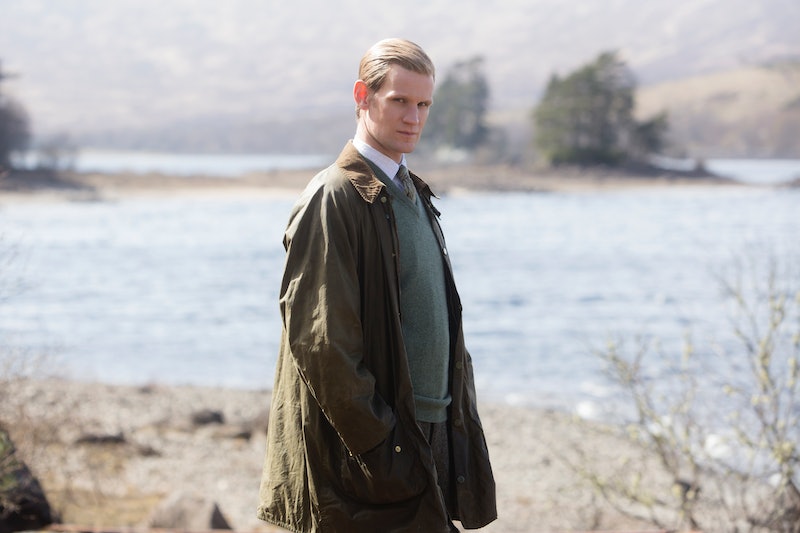 The acclaimed Netflix drama The Crown focuses heavily in Season 2 on the growing rifts in the marriage of Queen Elizabeth II and Prince Philip. In the season 2 finale (spoilers ahead!), The Crown implies that Stephen Ward and Prince Philip were connected via the infamous Profumo Affair, which doesn't help matters between him and his queen.

British audiences might be more familiar with the famous scandal than American audiences, so here's why this fictionalization is so provocative. (Bustle has reached out to the royal family for comment, but did not receive a response).

What happened in the Profumo Affair?

The Profumo Affair was a sex scandal that rocked the British government in the early 1960s. At its center was a cabaret dancer and model named Christine Keeler, who engaged in an affair with then-Secretary of State for War John Profumo, who was a rising star in the government of Prime Minister Harold Macmillan, per The New York Times. Keeler, who passed away at the age of 75 in December 2017, was simultaneously engaged in a relationship with an attaché in the Soviet Embassy in London, Commander Yevgeny Ivanov.

When the affair was uncovered, Britain's domestic intelligence agency MI5 thought that Keeler's affair with both of these men may have created a dangerous security breach, the NYT reports. The scandal caused Profumo to resign in 1963, and Prime Minister Macmillan followed suit later that year. This scandal contributed to the downfall of the Conservative government, according to CNN, as the Labour Party emerged victorious from the national elections held in 1964.

Stephen Ward, who also appears as a character in The Crown, was an osteopath and the one who introduced Keeler to Profumo. He was notorious for his high society connections and lavish parties, according to Vulture. Ward was accused of pimping out women, and newspapers at the time claimed he was running a "vice ring," according to The New York Times. Ward was placed on trial for immoral earnings, but died by suicide before a verdict was handed down, per The Sun.

How does the royal family fit in with the Profumo Affair?

The scandal was one that concerned mainly the British government, and not the royal family, but The Crown attempts to establish a connection between Stephen Ward and Prince Philip. The Daily Mail reports that while in real life, Ward, who had some real artistic talent, painted a picture of the Duke of Edinburgh, evidence of any connection between them stops there. But that didn't stop The Crown from deciding to involve Philip in the affair, first as a patient of Ward. In one scene, Philip is shown deciding to attend a weekend party hosted by Ward, in which Keeler (played by Gala Gordon) will be in attendance. In another, it is speculated that a photograph of a "mystery man" taken at Ward's party might indeed be Prince Philip.

Historians have taken issue with the show's decision to implicate the royal family in this event. Royal historian Christopher Wilson said that producers have become "increasingly elastic" with the truth, according to The Daily Mail, and he added that thinks "the show has crossed a line and stepped out of reality into fiction." The Daily Mail also reports that biographer Margaret Holder believes that the episode had gone beyond what was a matter of public record, as the piece paraphrases.

It seems that the show's creator, Peter Morgan, made the choice to associate Philip more closely with Ward than evidence supports in order to ramp up the drama and exacerbate tensions between the queen and her husband. It's obviously impossible to know what exactly went on between the couple behind closed doors, so taking some historical license is to be understood. Actor Matt Smith, who plays Prince Philip, spoke to The Los Angeles Times about sacrificing historical accuracy for domestic drama:

“[Philip's] got a huge conflict in him between his duty to his wife and his duty to himself as a man,” he said. “All the conflicts in his marriage are always quite satisfying to play because it’s quite a rich tapestry emotionally. It’s Peter Morgan’s version of what happens. There wasn’t a camera in there recording these things. It’s impressionistic, but it’s based on as much fact as we can gather.”

Yet though that might hold true for rumors of Philip's infidelities, it seems that most historians agree that The Crown's decision to create a closer relationship between Philip and Ward than the historical record shows was perhaps a step too far. The New York Times' review of Season 2 noted that "a plot contrivance" linking Philip more closely to the Profumo scandal ultimately doesn't pan out well for the show. Perhaps the decision was motivated by the desire to connect historical events more closely to the central cast, or to create more strife in the marriage between Queen Elizabeth and Prince Philip.

Is The Crown supposed to be historically accurate?

In any case, fans of the show should remember that while The Crown is great for getting a general sense of events, at the end of the day it's a television drama, not a history lesson. Later series of the show have reiterated this point, with Josh O'Connor, who plays a young Prince Charles, telling Town & Country that "We are creating a work of fiction, albeit based in some reality. But ultimately, there's only so much research you can do... After a time, you just got to crack on and create something for yourself."

In the same piece, Robert Lacey told the magazine that:

"Peter is very, very insistent, and so am I, that this is not a history documentary. We're not pretending this is a chronological record of those years. There are lots of documentaries that do that sort of thing. This is a drama which picks out particular objects. There's nothing political about why some things are covered and some are not. You take your priorities.”

So, not every event portrayed in The Crown’s four seasons should be taken at face value, and the show's coverage of the Profumo Affair is one of them.

More like this
'That '90s Show' Is Officially Coming Back For Season 2
By Gretchen Smail and Grace Wehniainen
The 'Freeridge' Cast Shared Their Hopes For A Potential Season 2
By Grace Wehniainen
You Might Want To Rewatch This Key 'On My Block' Scene To Understand 'Freeridge'
By Grace Wehniainen
Ashton Kutcher Wants Danny Masterson “To Be Found Innocent” In Rape Retrial
By Jake Viswanath
Get Even More From Bustle — Sign Up For The Newsletter
From hair trends to relationship advice, our daily newsletter has everything you need to sound like a person who’s on TikTok, even if you aren’t.

This article was originally published on Dec. 8, 2017