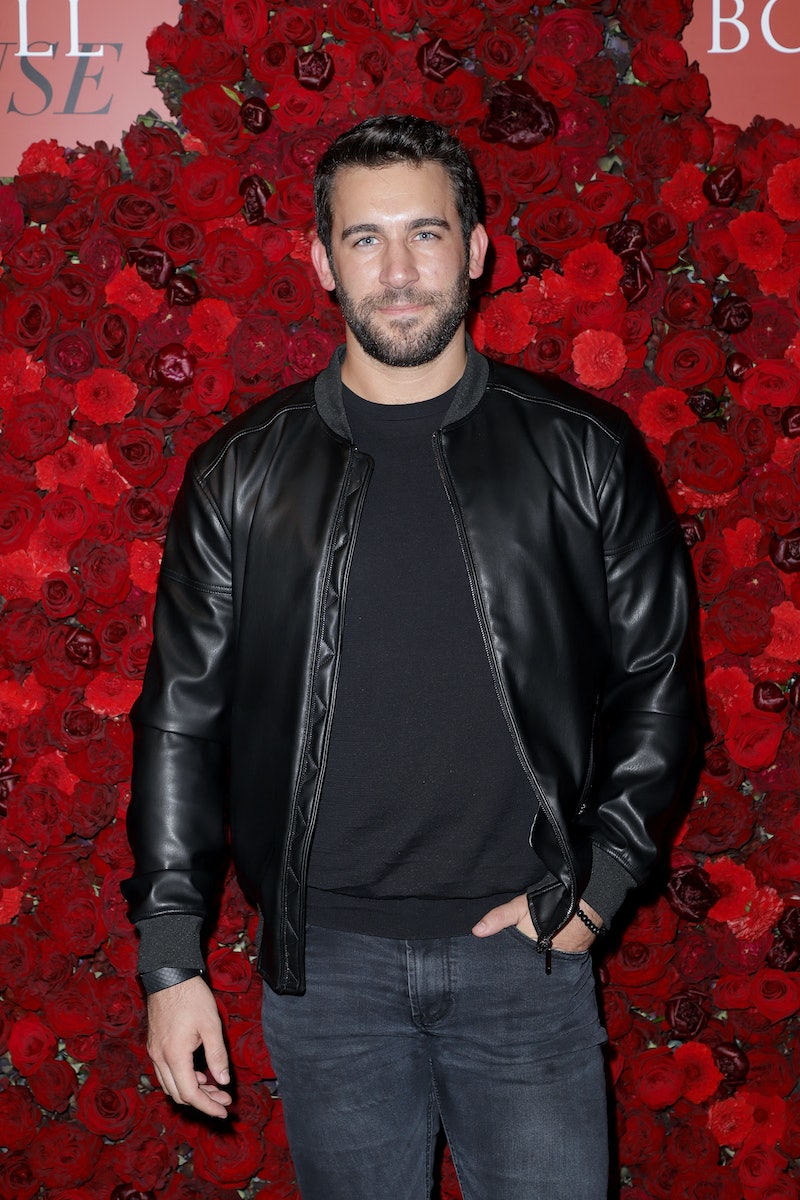 Derek Peth first became a part of Bachelor Nation as a contestant on JoJo Fletcher's season of The Bachelorette. Though he didn't ultimately end up with her final rose, his kind demeanor — and astounding likeness to John Krasinski — made him a fan favorite. He also appeared on two seasons of Bachelor in Paradise, and while neither led to him finding a happily ever after, Derek's recent engagement to fashion model Saffron Vadher shows that the drama and heartache he went through wasn't all for naught.

On Sunday, Nov. 8, Peth took to social media to share the exciting news with those who've been following his journey for years. "She said yes!!!" he wrote on Twitter. The Iowa native also posted a video of the happy couple on his Instagram Stories, where Vadher was flashing her sparkly new ring. Wells Adams, a Bachelor Nation fan-favorite, also hopped on Instagram to congratulate the newly engaged pair. "This makes me very happy," he wrote on a screenshot of their video. "Well done @pethderek! Welcome to the family @saffron!!"

Vadher also reshared several photos to her own Stories, including a close-up of her brand new diamond that she reshared from a friend. "Can we just take a moment to appreciate how bloody beautiful your ring is!?!" the caption read.

In March, Peth first confirmed the news that he and Vadher were dating. The two have shared multiple TikTok videos of themselves quarantining together amid the coronavirus pandemic, and Vadher has made several appearances on Peth's Instagram page. It's unclear how the two met or how long they've been together, but if a photo is worth a thousand words, Peth appears to be really happy.

After being eliminated from JoJo's season, Peth journeyed to Mexico for the fourth season of Paradise and got engaged to Taylor Nolan. However, the two parted ways in June 2018. "It is with much sadness that we have decided to end our engagement. We put everything we could into our relationship and are heartbroken to go forward separately, but we know this is the best decision for the both of us," the former couple said in a statement to Us Weekly at the time. "We will still be present in each other’s lives with support, admiration and respect for each other.”

Peth then returned to Paradise for Season 6 and developed a connection with Demi Burnett. She broke things off with him after Kristian Haggerty, a woman she'd been seeing before the show, arrived on the beach, but that clearly didn't deter Derek from being willing to open himself up to love again — albeit off-camera.

In addition to opening up about his relationship with Vadher on social media, Derek has been using his platform to encourage his followers to be more politically engaged. In January, before Elizabeth Warren dropped out of the presidential race, he went canvassing in his hometown of Waverly, Iowa to advocate for her candidacy. He also used to co-host a podcast called The Betchelor, but seems to have stepped down from that role for some reason, as Redditor friweigh pointed out.

In any event, Derek seems to be in a good place right now.

More like this
Hannah Ann Got Engaged 3 Years After 'The Bachelor' & The Proposal Was Dreamy
By Grace Wehniainen
'Bachelorette' Vet Clare Crawley Unveiled 2 Special Wedding Day Accessories
By Stephanie Topacio Long
Kaitlyn Bristowe Said Chris Harrison Ignored Her After Her 'Bachelorette' Hosting Gig
By Grace Wehniainen
The Bachelor’s Christina Mandrell Comes From One Of Country Music’s Most Famous Families
By Brad Witter
Get Even More From Bustle — Sign Up For The Newsletter
From hair trends to relationship advice, our daily newsletter has everything you need to sound like a person who’s on TikTok, even if you aren’t.

This article was originally published on June 29, 2020