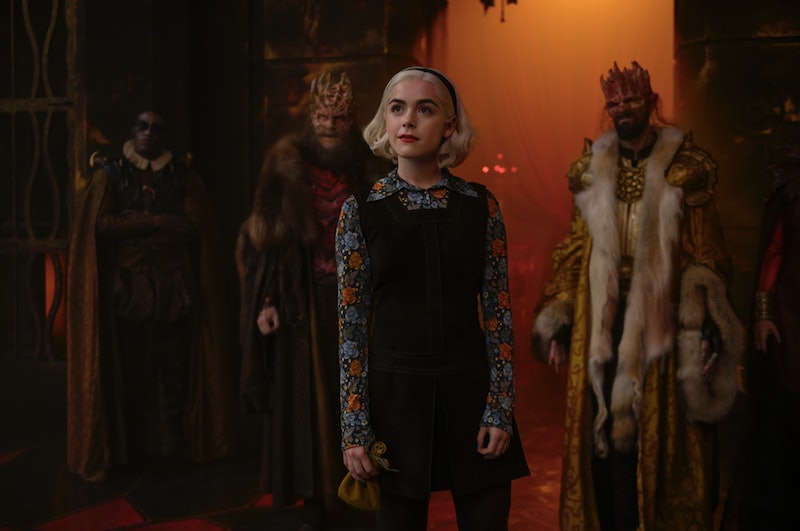 Update: Netflix announced on Oct. 26 that Chilling Adventures of Sabrina will return for Part 4 on Dec. 31. It will be the show's final season.

Earlier: If you've just marathoned your way through The Chilling Adventures of Sabrina Part 3 and are already itching for more episodes, good news: not only was the show renewed for Part 4 all the way back in December 2018, but it will likely be back pretty soon, considering it keeps to a fairly consistent schedule. Since premiering in October 2018, Chilling Adventures of Sabrina has released 28 episodes (including one Christmas special!) in just 15 months, which means fans have never had to wait more than 10 months for a new season. If the show keeps following the same production pattern, Part 4 should be coming by fall 2020 at the latest and during the summer at earliest, since Parts 1 and 2 were released only six months apart. Either way, we'll definitely get to see more of Sabrina's mischiefs before the end of the year.

Not much has been revealed about Part 4 or its basic plot details, but we can be sure of a few things. The main cast is returning, with the addition of new characters Robin (Jonathan Whitesell) and Mambo Marie (Skye Marshall), who each struck up relationships with main characters in Part 3. Between Nick, Harvey, and Caliban, Sabrina's romantic entanglements were also left uncertain, and those loose ends will need to be addressed in Part 4. Plus, between Sabrina's visit to Riverdale, the town, and Baxter High Raven Billy Martin's appearance on Riverdale, the show, Chilling Adventures seems to be increasingly building to a crossover with its sister series. And of course, Part 4 will have to explain whatever creature Blackwood released from his time egg , as well as the repercussions from Sabrina messing with the timelines and somehow creating two versions of herself.

Chilling Adventures of Sabrina has yet to be renewed for Part 5, but if it follows the success of its predecessor Sabrina the Teenage Witch in any way, we should be seeing a lot more of the Spellmans and Greendale throughout the next few years. And given the events of Part 3, it's clear the show knows how to continually up the stakes. The coven is far from solving all of its problems.

This article was originally published on Jan. 24, 2020