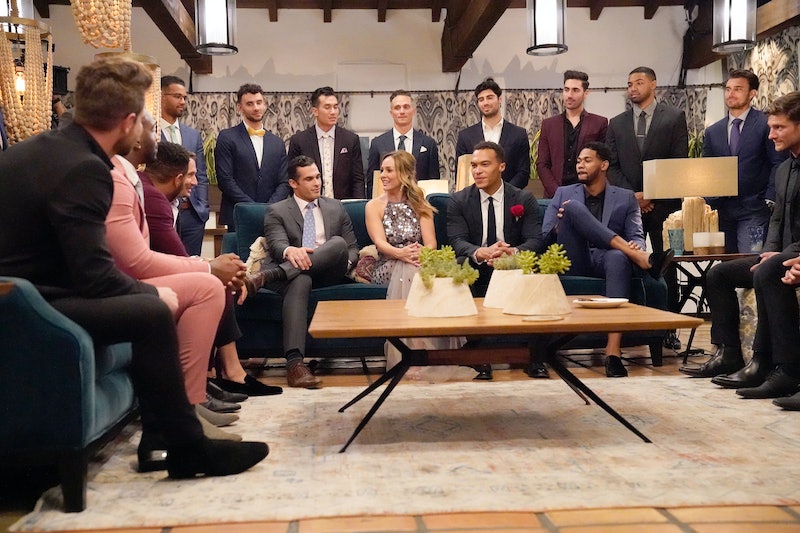 In early August, rumors began swirling that Tayshia Adams would replace Clare Crawley as the next Bachelorette, supposedly because Clare found love early on with contestant Dale Moss and no longer wanted (or needed) to remain on the show. ABC has yet to confirm that the switch-up will take place, but the promos certainly indicate the Bachelorette will be making an early exit. Assuming all the reports are true, one might think that figuring out when exactly Clare quits The Bachelorette would be easy, but it's actually a bit more complicated.

Clare's season was originally supposed to start filming in March, but due to the coronavirus pandemic, production was forced to shut down for several months. As per The Daily Mail, filming finally resumed on July 15 at the La Quinta Resort & Club in La Quinta, California. Then, just two weeks later on July 31, Us Weekly reported that producers were reaching out to some of the men who had applied to be on Clare's season, but hadn't been selected. No reason for this decision was given, but considering that the Tayshia rumors began a few days later, one could assume these guys were asked back in order to join her portion of the Bachelorette season. If true, that would mean Clare's journey for love took place over the course of just two weeks.

So does this mean that Tayshia will pop up shortly after the second episode (aka Week 2)? Not necessarily. Even if Clare only remained the Bachelorette for two short weeks during production, there could still be a lot of drama that takes place during that time, which could stretch several weeks into the season. There's no telling how time works in reality television — one day's filming could last an entire episode, or just a montage.

This means that, as of now, clues from the promos are our best option in trying to predict precisely when Clare makes her highly anticipated departure. (Her metaphorical "jump over the fence," if you will.)

During Monday night's premiere, Clare ended up eliminating eight of her 31 contestants, leaving 23 guys left who will attempt to win over her heart. Based on the latest teaser footage, we know that one of the men suggests that the 15 of them stage a walk-out over whatever unpleasant news they had just received (presumably in regards to Clare's decision to leave). So we know we at least have until 15 contestants remain before the real drama begins to unfold, which usually happens around Week 4. But again, the producers could decide to stretch out Clare's time on the show, making it feel like she was around for a lot longer than she actually was.

Of course, even if/when Clare leaves, that doesn't mean she won't also return shortly thereafter. After her reported departure in July, Clare was spotted back on set in mid-August, leaving many to speculate as to why. Did something go wrong between her and Dale? Is she there to offer Tayshia words of encouragement or advice? Was she really not replaced after all?

In typical Bachelor fashion, the more information we receive, the more confusing it gets — which will prove to be especially true throughout Clare's unique journey. As Chris Harrison noted to Entertainment Tonight, when it comes to this season, "there are no rules."

More like this
'Bachelorette' Vet Clare Crawley Unveiled 2 Special Wedding Day Accessories
By Stephanie Topacio Long
Kaitlyn Bristowe Said Chris Harrison Ignored Her After Her 'Bachelorette' Hosting Gig
By Grace Wehniainen
This 'Bachelor' Contestant Got Back With Her Bachelor Nation Boyfriend After Going Home
By Grace Wehniainen
'Bachelor' Fans Think Rachel & Clayton Are Dating After This TikTok
By Grace Wehniainen
Get Even More From Bustle — Sign Up For The Newsletter
From hair trends to relationship advice, our daily newsletter has everything you need to sound like a person who’s on TikTok, even if you aren’t.