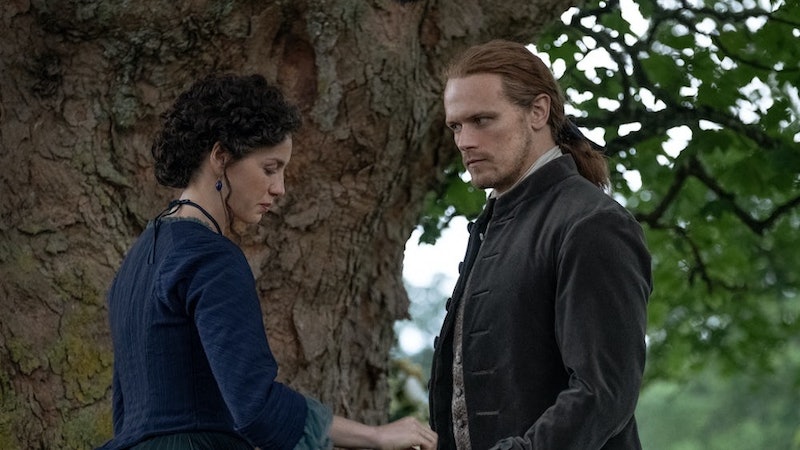 Droughtlander is finally coming to an end. After Outlander aired its Season 5 finale on May 10, 2020, fans were left wondering when the show would come back. Starz had already greenlit Outlander for Season 6, so it wasn’t a question of if the show would return, but when. On June 1, however, fans learned they’ll be returning to Fraser’s Ranch pretty soon: Starz announced that Season 6 of Outlander has nearly completed production and will consist of eight episodes including a 90-minute season premiere, set to air sometime in early 2022. Here’s everything we know about Season 6 of Outlander.

Though the show generally follows a somewhat regular release schedule, the fact that pretty much all TV production was halted at the start of the coronavirus pandemic obviously complicated things. Prior to the pandemic, Season 6 hadn't even started filming, though star Sam Heughan (Jamie Fraser) revealed in a March tweet that the writers were already penning the scripts. Caitriona Balfe (Claire) reiterated that sentiment in mid-April, tweeting during an online Q&A that "the writers are still at work."

By the end of 2020, however, the entertainment industry put safety guidelines in place and started resuming most film and television productions. As of February 2021, Outlander had officially begun shooting Season 6. On June 1, Starz announced that the forthcoming season is set to wrap production in Scotland within a week and will consist of eight episodes — a decline from previous seasons, which have each featured between twelve and sixteen episodes each.

In a statement released alongside the announcement, showrunner Matthew B. Roberts detailed the decision to produce a shorter season: “Filming in 2021 has presented an unprecedented set of challenges which led us to the decision to truncate the season in order to bring the fans the most vibrant and dynamic season as soon as possible. Dinna fash, we will then film an extended Season 7 with 16 episodes next year as life returns to normalcy.” Roberts continued, “We are excited to get into the editing room to work on bringing the fans one step closer to reuniting with the family back on Fraser's Ridge.”

Though the season will be based on the sixth installment of Diana Gabaldon’s Outlander book series, A Breath of Snow and Ashes, some of those storylines have already been introduced in Season 5. Stephen Bonnet's death, Claire's abduction, and Briana and Roger's journey through the stones all take place in the sixth book, and will surely be more deeply explored in the new season.

"Given what [the producers are] dealing with in terms of constraints and space, I think it makes all kinds of sense because I have storylines that can stretch out for three or four books," Gabaldon told Town & Country of the changes. "It's a coherent storyline, so I don't see any problem really in lifting pieces of the storyline from one book and condensing them with the earlier pieces from another book in order to make a continuous line."

On June 1, Starz announced that Season 6 of Outlander will air in early 2022 and begin with a 90-minute premiere episode. The season’s exact premiere date is yet to be announced.

This post will be updated with the trailer, premiere date, and additional plot details as more information on Outlander Season 6 becomes available.

More like this
Netflix Shut Down 'Bridgerton' S3 Rumours About A “Very Dark” Storyline
By Bustle
Everything To Know About The 'Daisy Jones & The Six' TV Series
By Maxine Harrison and Brad Witter
'The Crown' Season 6 Has Suspended Filming "Out Of Respect" For The Queen's Death
By Bustle Staff
Bill & Frank’s 'The Last Of Us' Episode Has Twitter Emotionally Wrecked
By Alyssa Lapid
Get Even More From Bustle — Sign Up For The Newsletter
From hair trends to relationship advice, our daily newsletter has everything you need to sound like a person who’s on TikTok, even if you aren’t.

This article was originally published on May 10, 2020