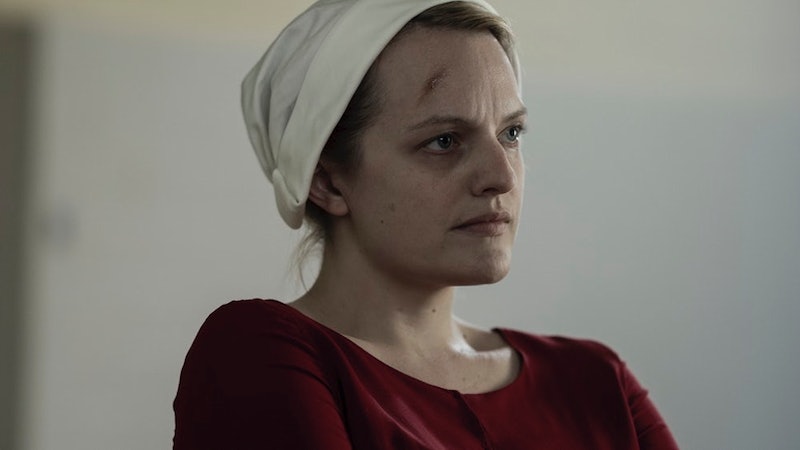 Update: Hulu announced on Dec. 10 that The Handmaid's Tale Season 4 will premiere in 2021. The show has also been renewed for Season 5.

Earlier: The third season of The Handmaid's Tale may be coming to a close this week, but June's takedown of Gilead is still far from over. Hulu announced at this year's Television Critics Association that the series would definitely be returning for a fourth season. However, figuring out when The Handmaid's Tale Season 4 will premiere may be a little more difficult than you'd initially think — especially since the show has somewhat strayed from its initial pattern.

When the series first made its debut on the streaming platform, the first three episodes became available on April 26, with new episodes airing every week after that. Season 2 followed a very similar guideline. The first three episodes came out on April 25 with a new episode hitting Hulu from then on each week. One would think this pattern would persist for Season 3, but that's where things tend to get a little trickier to predict.

The third season kicked off on June 5 — a fitting premiere date considering the name of the show's protagonist. But is this the start of a new precedent of when fans can expect future seasons to debut? As it stands right now, that remains to be seen.

Though the future of the series is secure, Hulu has yet to reveal just when precisely this dystopian world of female oppression will return with its fourth installment. April and June seem like the easiest predictions right now, though it's hard to say for certain until the streaming site announces a specific date.

In the meantime, viewers will just have to immerse themselves in the Season 3 finale and see whether or not June and Co. leave us with any big cliffhangers to ponder over in the coming months ahead. Will June's plan to save the children of Gilead and bring them to Canada actually happen, and if so, will she escape with them? Will Hannah ever be heard from again? What will end up happening to Commander Waterford? These are all questions that still need to be answered and some of which Season 4 will be sure to tackle to some extent along with any other new storylines that get introduced.

The Handmaid's Tale received a total of 11 nominations for the 2019 Primetime Emmy Awards, two nods going to guest stars Bradley Whitford and Cherry Jones, while the other nine center around directing, writing, etc. Needless to say, this series remains popular among fans and critics alike, despite some of the surprising (and downright confusing) decisions June has made along the way.

So fear not, folks — The Handmaid's Tale may be leaving your TV screens for the rest of the year, but it'll be back in your life before you know it, allowing Elisabeth Moss to continue to wow us with her enormous talent and acting range. Let's just hope that when this story does ultimately come to an official end, June will receive some semblance of a happy ending. Blessed be the fruit, indeed!

More like this
The 'Freeridge' Cast Shared Their Hopes For A Potential Season 2
By Grace Wehniainen
'Succession' Season 4 Will Be An "Absolute Banger" According To Cousin Greg
By Bustle Staff
Everything To Know About A Potential 'Lockwood & Co.' Season 2
By Gretchen Smail
Everything To Know About 'Cobra Kai' Season 6
By Brad Witter
Get Even More From Bustle — Sign Up For The Newsletter
From hair trends to relationship advice, our daily newsletter has everything you need to sound like a person who’s on TikTok, even if you aren’t.

This article was originally published on Aug. 14, 2019