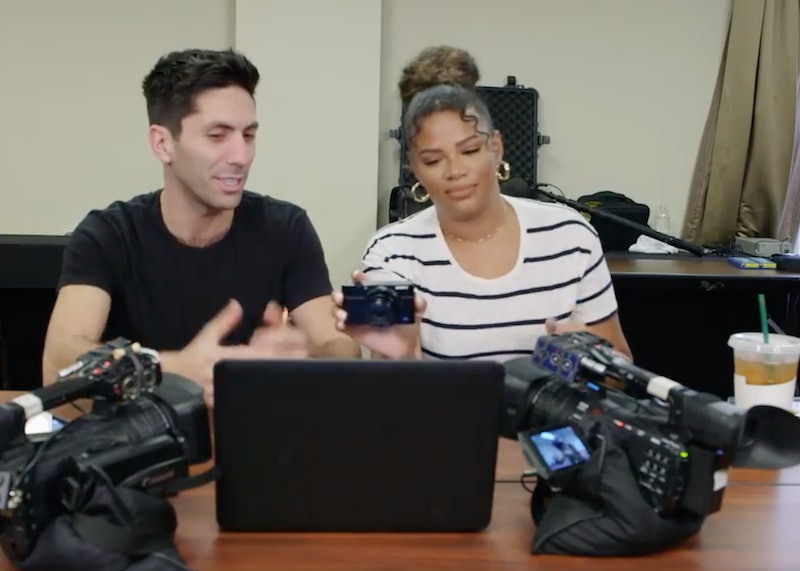 This week's Catfish was filmed pre-quarantine and, wow, it's weird to watch people greet each other with hugs! Tonight's episode focuses on TikTok star Jake Fuller, who met Taylor on Instagram and reached out to Nev and Kamie when he knew something was up. She covered her camera during FaceTime chats and ghosted him multiple times, all telltale signs that Taylor may not be who she says she is. Jake enlisted the help of the Catfish crew because he wanted to know the truth — but it turns out that Jake wasn't fully innocent himself.

We've heard of catfish persuading hopefuls to send money and gifts — that's nothing new. But Taylor flipped the narrative by offering cash a few minutes after sliding into Jake's DMs. Jake found it odd, but also didn't stop it from continuing. In fact, he got used to it and began consistently asking for more. He didn't initially admit that to Nev and Kamie, though.

Once the hosts confirmed that Taylor was not the person in her photos, they called and asked her to meet at a local park. After all, would it be Catfish if they met anywhere else? A few hours later, into the covered pavilion walked Amanda, who admitted to catfishing Jake because she's never been good at making friends as herself. She was bullied in high school and resorted to paying micro-influencers like Jake, who boasts 1.2 million followers, just to have "cool" people to talk to.

Although she initiated the cash transactions, Amanda felt taken advantage of by Jake. At one point, she even threatened to expose him for using her. During their meeting at the park, Jake admitted to taking the gifts too far (he would often ask her to send food to his house) and apologized. They agreed to be friends, and according to the show's two month follow-up, even FaceTimed for real after the show.

Now, Jake is in college at University of Tennessee during the pandemic, and he dyed his hair purple. When he's not in class, Jake is incredibly active on TikTok, where he shares lots of point-of-view videos and other random vlogs. He also has over 82,000 Instagram followers, so you can see why Amanda thought he'd be an interesting person to strike up a conversation with. Amanda seems to have deleted the Taylor account, but because she didn't reveal much more about herself on the show, her real socials are tricky to locate.

Considering Amanda exhibited major warning signs throughout the virtual friendship, Nev suspected that Jake knew he was dealing with a catfish and let it continue for his own benefit. It's possible that Jake also thought appearing on Catfish could boost his online following. There's no way to know that for sure, but fans can keep an eye on his follower count if they're interested in how it plays out.